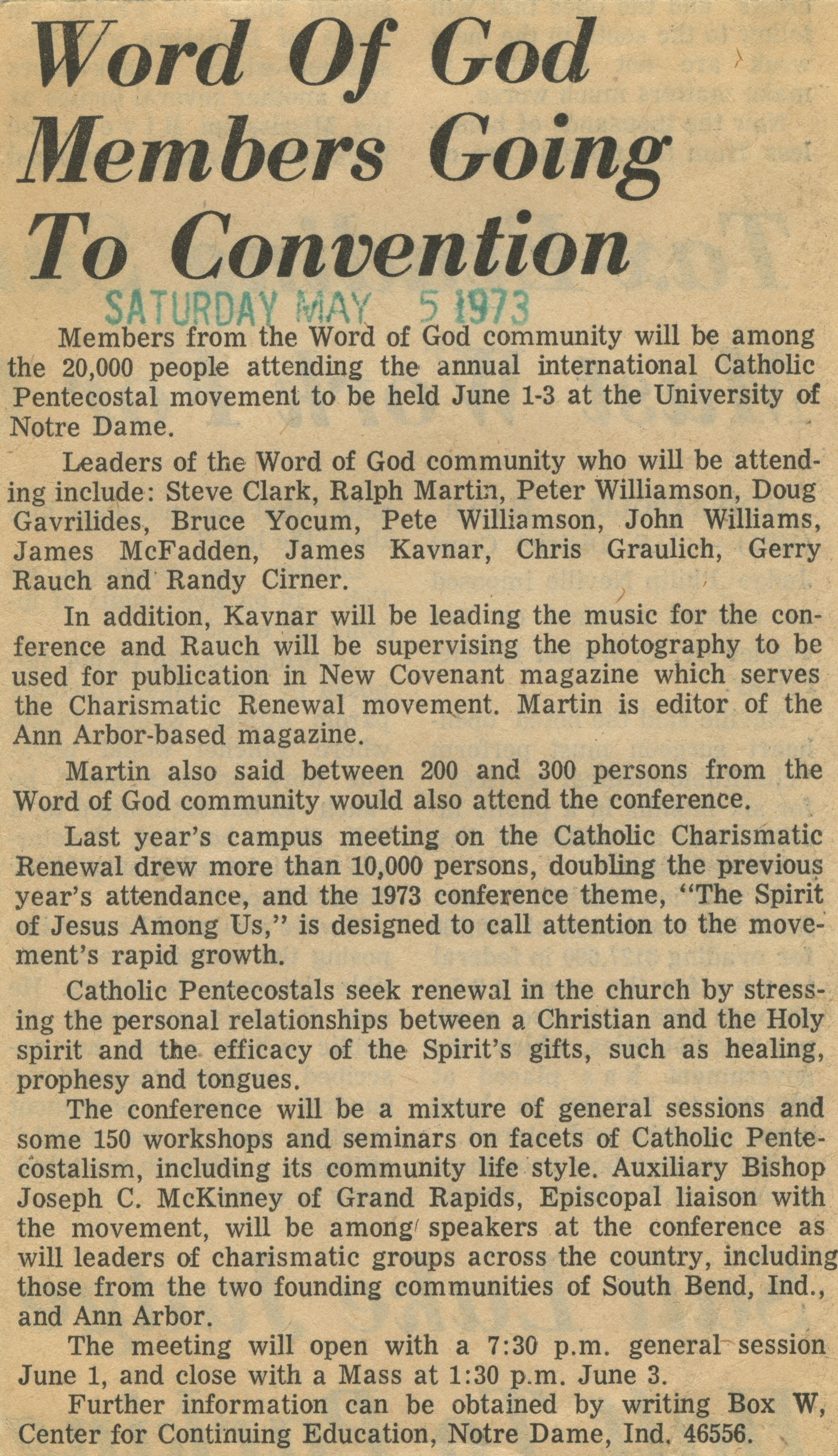 Word Of God Members Going To Convention
Members from the Word of God community will be among the 20,000 people attending the annual international Catholic Pentecostal movement to be held June 1-3 at the University of Notre Dame.
Leaders of the Word of God community who will be attending include: Steve Clark, Ralph Martin, Peter Williamson, Doug Gavrilides, Bruce Yocum, Pete Williamson, John Williams, James McFadden, James Kaynar, Chris Graulich, Gerry Rauch and Randy Cirner.
In addition, Kavnar will be leading the music for the conference and Rauch will be supervising the photography to be used for publication in New Covenant magazine which serves the Charismatic Renewal movement. Martin is editor of the Ann Arbor-based magazine.
Martin also said between 200 and 300 persons from the Word of God community would also attend the conference.
Last year's campus meeting on the Catholic Charismatic Renewal drew more than 10,000 persons, doubling the previous year's attendance, and the 1973 conference theme, "The Spirit of Jesus Among Us," is designed to call attention to the movement's rapid growth.
Catholic Pentecostals seek renewal in the church by stressing the personal relationships between a Christian and the Holy spirit and the efficacy of the Spirit's gifts, such as healing, prophesy and tongues,
The conference will be a mixture of general sessions and some 150 workshops and seminars on facets of Catholic Pentecostalism, including its community life style. Auxiliary Bishop Joseph C. McKinney of Grand Rapids, Episcopal liaison with the movement, will be among/ speakers at the conference as will leaders of charismatic groups across the country, including those from the two founding communities of South Bend, Ind., and Ann Arbor.
The meeting will open with a 7:30 p.m. general session June 1, and close with a Mass at 1:30 p.m. June 3.
Further information can be obtained by writing Box W, Center for Continuing Education, Notre Dame, Ind, 46556.