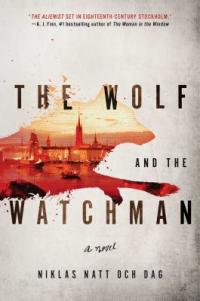 Named Best Debut Novel of 2017 by the Swedish Academy of Crime Writers, and is pegged one of this year’s best books by the Washington Post, The Wolf and the Watchman *  by Niklas Natt och Dag will appeal to readers of Nordic crime fiction and historical mystery alike.

Stockholm, autumn 1793. Night watchman Mickel Cardell was roused from a drunken stupor to pull a floating corpse out of the Larder, once a pristine lake on Stockholm's Southern Isle, now a rancid bog. Cecil Winge, a young lawyer dying of consumption, was entrusted to solve this heinous crime where the body showed signs of prolonged torture. Aided by Cardell, the pair had little to go on beyond a scrap of fabric with an unusually design and the sighting of a green sedan chair. Eventually their painstaking investigation led them to the Eumenides, an ostensibly charitable upper-class organization.

“Natt och Dag's first novel is engrossing and gross. The imagery is vividly conveyed and not for the faint of heart or stomach. Yet for those who like their mysteries dark, this is a standout. The characterization is excellent, as is the evocation of eighteenth-century Stockholm, an uncommon historical setting that provides a vibrant backdrop for this unusual mystery. Natt och Dag's side-plots dovetail neatly, his pacing is skillful, and he explores with aplomb his novel's main theme, Homo homini lupus est  - Like a wolf is man to other man ~ Plautus.“ (Booklist)