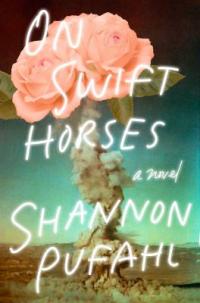 Before you dive into On Swift Horses * by Shannon Pufahl (Stanford, Stegner Fellow), you might be interested in listening to  NPR's Scott Simon talks with the author about her debut novel - inspired by her grandmother’s story.

In 1956, newly-wed Muriel and Lee left her Kansas hometown for San Diego, hoping for a better life and a little bungalow all of their own. Lee’s brother Julius, was supposed to join them but disappeared without a word.  Eavesdropping on her customers at the Heyday Lounge frequented by retired jockeys and bookies, Muriel began slipping off to the racetrack and trying her luck with the horses. Wildly successful, she secretly used her winning to allow Lee to fulfill his dream of a house in the suburbs.

When Julius, a habitual gambler finally showed up, with a mustang in tow, Muriel was secretly pleased while Lee was guarded, until Julius’s secretive and reckless past caught up with him, bringing discord into their lives, and forcing Muriel to look deep into her heart.

Narrated by Muriel and Julius in turn, “...Pufahl's sharp, gritty details of 1950s San Diego and Las Vegas effectively draw the reader into her protagonists' struggles to bring meaning to their lives, however different their experiences.” (Library Journal)

“Pufahl's prose is lush and slow with the romance of emotion and the postwar frontier. Her dialogue is sparse and pointed, every word deliberately spoken. On Swift Horses is a queer Western for an utterly contemporary audience.” (Booklist)