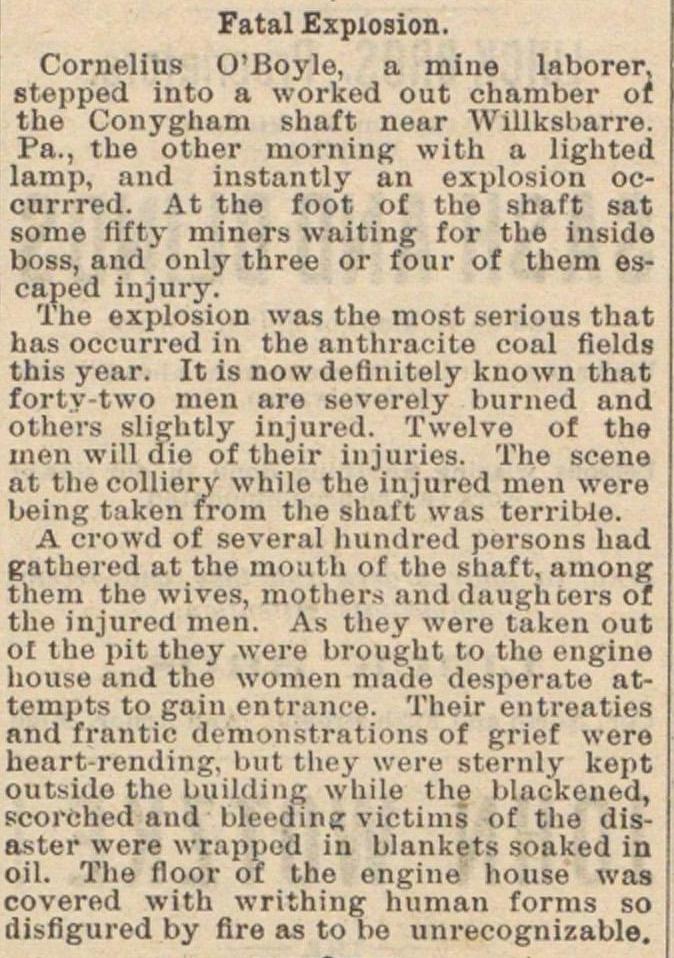 Cornelius O'Boyle, a mine laborer, stepped into a worked out chamber oí the Conygham shaft near Willkslarre. Pa., the other morning with a lighted lamp, and instantly an explosión occurrred. At the foot of the shaft sat some fifty miners waiting for the insido boss, and 011I37 tbree or four of them escaped injury The explosión was the most serious that has occurred In the anthracite coal fields this year. It is nowdefinitely known that forty-two men are severely burned and others slightly injured. Twelve of ths men will dio oftheir injuries. The scène at thecolliery whilo the injured men were being taken trom the shaft was terrible. A erowd of several hundred persons had gathered at the moutli of the shaft, among them the wives, mothers andduughcers of the injured men. As tlicy were taken out 01 the pit they were brought to tho engine house and tho womon made desperate attempts to gain entrance. Their entreaties and frantic deïnonstrations of grief were heart-rending. hut they were sternly kept outsido the building while the blackened, scorched and hleeding victima of the disaster were wrappod in blankets soaked in oil. The floor of the engine house was covered with writhing human forms so disfigured by fire as to be nnrecognizabld.