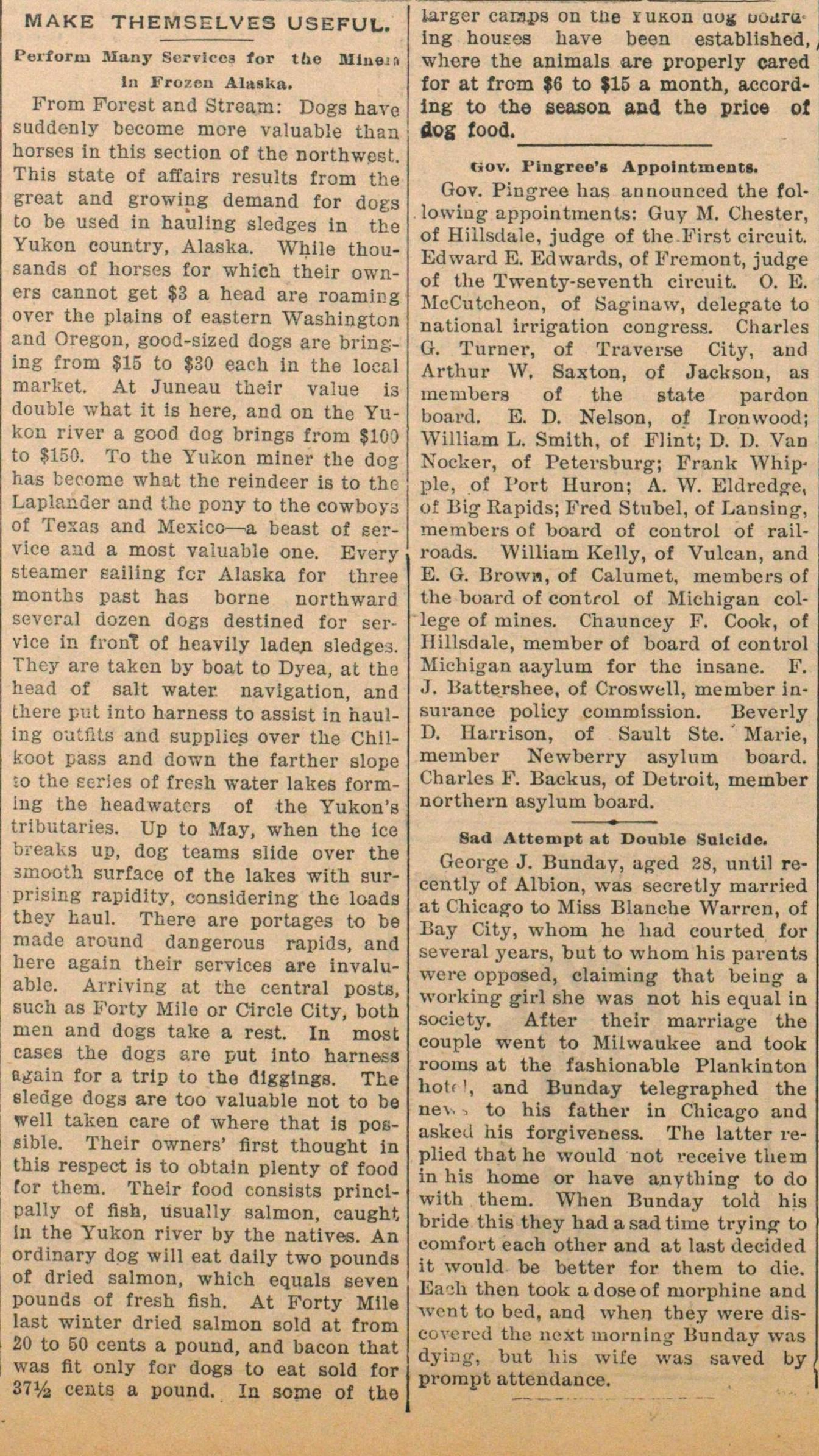 From Forest and Stream: Dogs have suddenly become more valuable than horses in this section of the northwpst. This state of affaire results from the great and growing demand for dogs to be used in hauling sledges in the Yukon country, Alaska. While thousands of horses for which their owners cannot get $3 a head are roaming over the plains of eastern Washington and Oregon, good-sized dogs are bringing from $15 to $30 each in the local market. At Juneau their value is doublé what it is here, and on the Yukon river a good dog brings from $100 to $150. To the Yukon miner the dog has become what the reindeer is to the Laplander and the pony to the cowboys of Tesa3 and Mexico - a beast of service and a most valuable one. Every steamer gailing fcr Alaska for three months past has borne northward several dozen dogs destined for service in front of heavily ladean sledgej. They are taken by boat to Dyea, at the head of salt water navigation, and there put into harness to assist in hauling outfits and supplies over the Chilkoot pass and down the farther slope io the series of fresh water lakes forming the headwatcrs of the Yukon's tributaries. Up to May, when the ice breaks up, dog teams slide over the smooth surface of the lakes with surprising rapidity, considering the loads they haul. There are portages to be made around dangerous rapids, and here again their services are invaluable. Arriving at the central posts, such as Forty Milo or Circle City, both men and dogs take a rest. In most cases the dogs are put into harness again for a trip to the dlgginga. The sledge doga are too valuable not to be well taken care of where that is possible. Their owners' first thought in this respect is to obtain plenty of food for them. Their food consista principally of flsh, usually salmón, caught In the Yukon river by the natives. An ordinary dog will eat daily two pounds of dried salmón, which equals Beven pounds of fresh fish. At Forty Mile last winter dried salmón sold at from 20 to 50 cents a pound, and bacon that was fit only for dogs to eat sold for S1V cents a pound. In sorne of the larger caiaps on tüe ïukoo uog uotirii' ing houses have been established, where the animáis are properly cared for at from $6 to 15 a month, according to the season and the price of dos food.