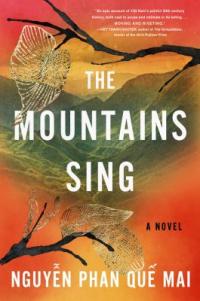 The Mountains Sing, * * * first novel in English by celebrated Vietnamese poet Nguyen Quế Mai Phan (in downloadable eBook and audiobook) is a multigenerational saga of the Trần family. Narrated in tandem by Tran Dieu Lan and her granddaughter, it spans much of the 20th century, through decades of occupations and war.

Born into one of the wealthiest farming families in Nghệ An Province, Dieu Lan lived through the French Occupation, only to witness her father’s gruesome murder at the hands of a brutal Japanese soldier. Surviving on wild fruits and insects during the Great Famine of 1945, she had to give away her 6 children during the Land Reform, escaping execution only through the kindness of a longtime family retainer, her brother not so lucky. Through humiliating work and ingenuity, she managed to prosper and to reunite her family, only to watch them join the NVA to fight against the South and the US Army.

The novel opens with a harrowing scene of the bombing of Hanoi in 1972, when Dieu Lan was again doing everything possible to keep a loved one alive - this time her 12 year-old granddaughter Huong “fragrance”, and gradually "opened the door of her childhood" with stories - believing “(i)f our stories survive, we will not die.”

The title of the novel references a hand-carved wooden bird, Huong’s only tangible remembrance of her father. This bird -the son ca “The Mountain Sings", would keep company with the soldiers as they walked into battle. The Vietnamese believe its songs can reach heaven and bring back the souls of the dead.

“Recalling Min Jin Lee and Lisa See, Nguyen displays a lush and captivating storyteller’s gift as she effortlessly transports readers to another world, leaving them wishing for more.“ (Library Journal)