Treton College Fightin' Narwhals have truly put up the big fight this season, DOMINATING from tip of the horn to end of the tail throughout the 13 game season. If you tuned in on AADL TV, you watched in awe with host Walter Moore and his handsome and toothsome co-host John P. Walrus as the Narwhals went from underdogs in the VERY first game to victors in the final NATIONAL CHAMPIONSHIP GAME in New Orleans! The Narwhals immediately led the season with their brutal defeat of Central Michigan. They kept this stamina up throughout the season, leading them all the way to the LAST game's triumph, straight out of a STORYBOOK ENDING! Get to know some of this story's main characters as we play through the highlights!

This badge has been awarded to 144 players

ood catch! That is now fixed!

Good catch! That is now fixed!

Do I search the name of the…

not the animal name, but the…

not the animal name, but the given name.

The name starting with "n"…

The name starting with "n" does not work.

If you're searching for the…

It isn't showing up in any…

It isn't showing up in any of the downloads!

I searched the given name in…

I searched the given name in the catalog, and I put it under the format "downloads" but it won't show up in any of the first 30 results! Please help. 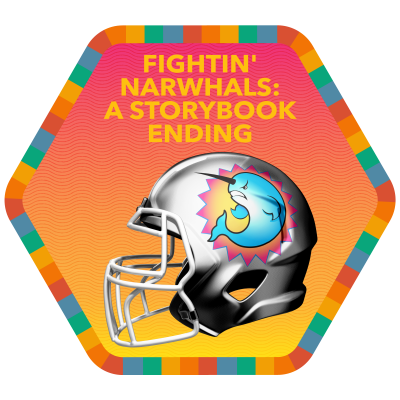