Do you know this word? if not-- that's okay. It means "good morning" in Japanese. Language can divide people, but, it doesn't mean that we all are that different. Yet when we find differences in others, how do we handle them? Well that is one of the questions implied in the movie "Good Morning" by filmmaker Yasujirō Ozu. 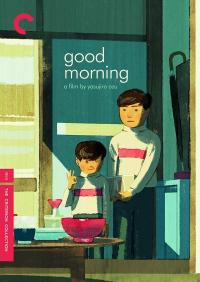 The film "Good Morning" known as "Ohayō" in Japan, is a story about differences between generations of people within one culture-- even one family. The movie follows the comedic tale of two young boys who take a vow of silence to protest against their parents stubbornness. This film was made in 1959, yet the feelings and emotions feel as real as the ones we all face today.

Many years ago, this was the first film by Ozu I had ever seen. I had never seen a movie like this before. This is not an action packed Hollywood feature, nor is it a heart wrenching drama. It is an eccentric telling of the day to day troubles and humors of life. The directorial work of Ozu is unique, with obsessive composition and attention to detail. You could pause this film at almost any frame and think you were looking at a beautifully arranged photograph. This film is not going to be loved by everyone... however, everyone should watch it at least once to get a unique taste of this kind of film making.