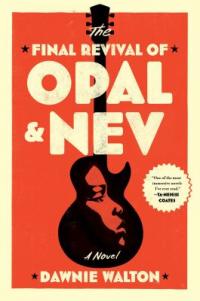 This memorable debut is structured as an oral history project, documenting Opal & Nev - an avant-garde rock duo who found a certain cult following in the 1970s, in anticipation of their reunion tour after an absence of decades.

Sunny Shelton, the first African American woman editor of a music magazine, researches and interviews not only the principal characters, but also family, friends, managers, and critics of the pair.  Her passion is fueled by a personal agenda - her father, Jimmy, was a drummer for the duo and was having an affair with Opal when he was killed at a showcase concert that was supposed to rock them to stardom.

Opal Jewel, a fiercely independent young woman from Detroit, caught the eye of Nev(ille) Charles, an aspiring British singer/songwriter at a NYC open mic. Bald, black, outrageously stylish, and radical in her politics, her voice and energy impressed. Leaving behind family and the 9-5 job at Michigan Bell, she took up Nev’s offer to make rock music together.

As the reunion tour approaches, Sunny discovers conflicting versions of what actually happened on that fateful night. A well-published photo captured Opal blanketed in a Confederate flag as Nev carried her away, while presumably, Jimmy was left to face a riotous crowd.

“The novel is book-ended by an equally violent reunion that confirms a shocking secret, and Opal proves herself the champion of the "marginalized, bullied, discriminated against." Walton pumps up the volume with a fresh angle on systemic racism and freedom of expression. This is a firecracker.” (Publishers Weekly)

“The Final Revival of Opal & Nev is itself anything but "regular." A deep dive into the recent past, it also simultaneously manages to be a rumination on up-to-the-minute themes like cultural appropriation in music, and the limits of white allyship. It's the kind of overwhelming novel that, like a polyphonic double album back in the day, readers might want to experience more than once to let all the notes sink in.” ~ Maureen Corrigan, NPR