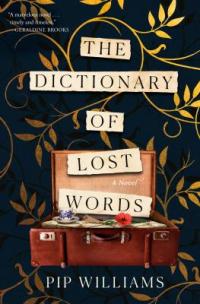 Australian memoirist (One Italian Summer, 2017) Pip Williams, based her debut novel The Dictionary of Lost Words *  (also available in downloadable eBook and audiobook) on her original research in the Oxford English Dictionary archives. In her Author’s Notes, Williams laments that she was only able to identify mostly the male scholars who compiled the first edition of the OED, thus making it a rather “flawed and gendered text”. This novel is her attempt to acknowledge the contributions of the largely unnamed women lexicographers.

Work began on the Dictionary in the 1850s. By the 1880s, James A. H. Murray, a Scottish schoolmaster was its editor, working out of the “Scriptorium,” a garden shed in Oxford with a group of lexicographers, among them, widower Harry Nicholl whose young daughter, Esme was allowed to spend her days under the sorting table, listening and observing the team at work.

One day a slip of paper containing the word “bondmaid” landed in Esme’s lap. Believing it to be discarded, she hid it in a wooden chest.  Over time, with the help of Lizzie, the Murrays’ maid and women at the local market, Esme collected words and meanings relating to women’s and common folks’ experiences, deemed unworthy and too objectionable by the OED gatekeepers, words she hoped to publish in her own dictionary - the Dictionary of Lost Words.

The narratives parallel the women’s suffrage movement in England as Esme gradually became a trusted member of the OED team while she continued to collect words in her wooden chest.  “The looming specter of World War I lends tension to Esme’s personal saga while a disparate cast of secondary characters adds pathos and depth.” (Kirkus Reviews)

“Enchanting, sorrowful, and wonderfully written, the book is a one-of-a-kind celebration of language and its importance in our lives.” (Library Journal)

“A lexicographer's dream of a novel, this is a lovely book to get lost in, an imaginative love letter to dictionaries.” (Booklist)