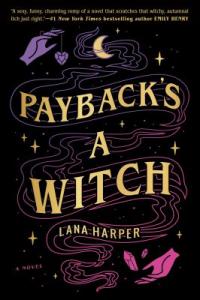 Payback's a Witch * * *  by Lana Harper is the first in The Witches of Thistle series, (also in downloadable eBook and audiobook) and her adult debut (after four YA novels written as Lana Popović), “a queer rom-com that bewitches from the very first page.”(Publishers Weekly)

Emmy Harlow is heading home to Thistle Grove (IL) after fleeing with a broken heart almost a decade before. She plans to stay only long enough to carry out the familial duty of being her generation’s arbiter, overseeing the magical tournament that pits the 4 founding families against each other... that is, until she sets eyes on the devastatingly gorgeous, wickedly charming Talia Avramov; reconnects with her childhood besties Linden Thorn; and witness first hand, the mechanization of the despicable sleazeball Gareth Blackmoor who broke her heart (and that of almost every other woman in town).

As heir to the most powerful magical family in town, Gareth is favored to win the tournament but the three scorned women have something up their sleeves. As they team up and Emmy’s magic returns, she begins to wonder if leaving would mean giving up what she wants most.

“The love story between Talia and Emmy develops beautifully, but the true romance is with the town and the community. The bonds of both family and friendship shine from start to finish, and Harper balances the different clans and captures how, together, they make Thistle Grove the magical place that it is.“ (BookPage) 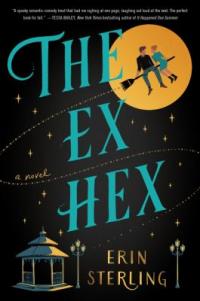 Nine years ago, little witch Vivi(enne) Jones fell hard for Rhys Penhallow, a Welsh exchange student whose family founded the town of Graves Glen and the local college, and promptly broke her heart when she found out he was engaged. Now he is back, reluctantly, to represent his family at the annual fall festival, and to recharge the town's ley lines, a necessity every 100 years.

But as soon as he sets foot in the town, one calamity after another strikes Rhys. Could it be the curse the young and broken-hearted Vivi put on him, fueled by vodka, weepy music, bubble baths? Soon, mysterious affliction begins affecting the town as well, forcing Rhys and Vivi to get over their mutual mistrust, ignore their chemistry, and work together to break the curse before it kills everyone.

“Sterling writes a fun, sexy romantic comedy with a compelling plot, fantastic worldbuilding, twists that give the story depth, and engaging primary and secondary characters. The novel wraps up plenty of loose ends, but readers will be eager for sequels.“ (Library Journal) 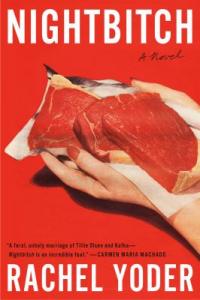 In Nightbitch*  by Rachel Yoder (also in downloadable eBook and audiobook), an unnamed  sleep-deprived “de-facto single mom” of a demanding toddler (her tech husband travels for work every week), becomes convinced she's turning into a dog. As the dense patch of hair in the back of her neck grows thicker, and her canines look decidedly sharper, she is bewildered by her metamorphosis, and struggles to keep her alter-canine-identity secret. Online searches are no help, she seeks answers at her local library. There she finds the mysterious academic tome A Field Guide to Magical Women: A Mythical Ethnography which validates her experience and encourages her to embrace the freedom of her new animal nature. She also finds common ground with a group of other mommies involved in a multilevel-marketing scheme who may also be more than what they seem.

“Bursting with fury, loneliness, and vulgarity, Yoder's narrative revels in its deconstruction of the social script women and mothers are taught to follow, painstakingly reading between the lines to expose the cruel and downright ludicrous ways in which women are denied their personhood. An electric work by an ingenious new voice, this is one to devour.” (Publishers Weekly)