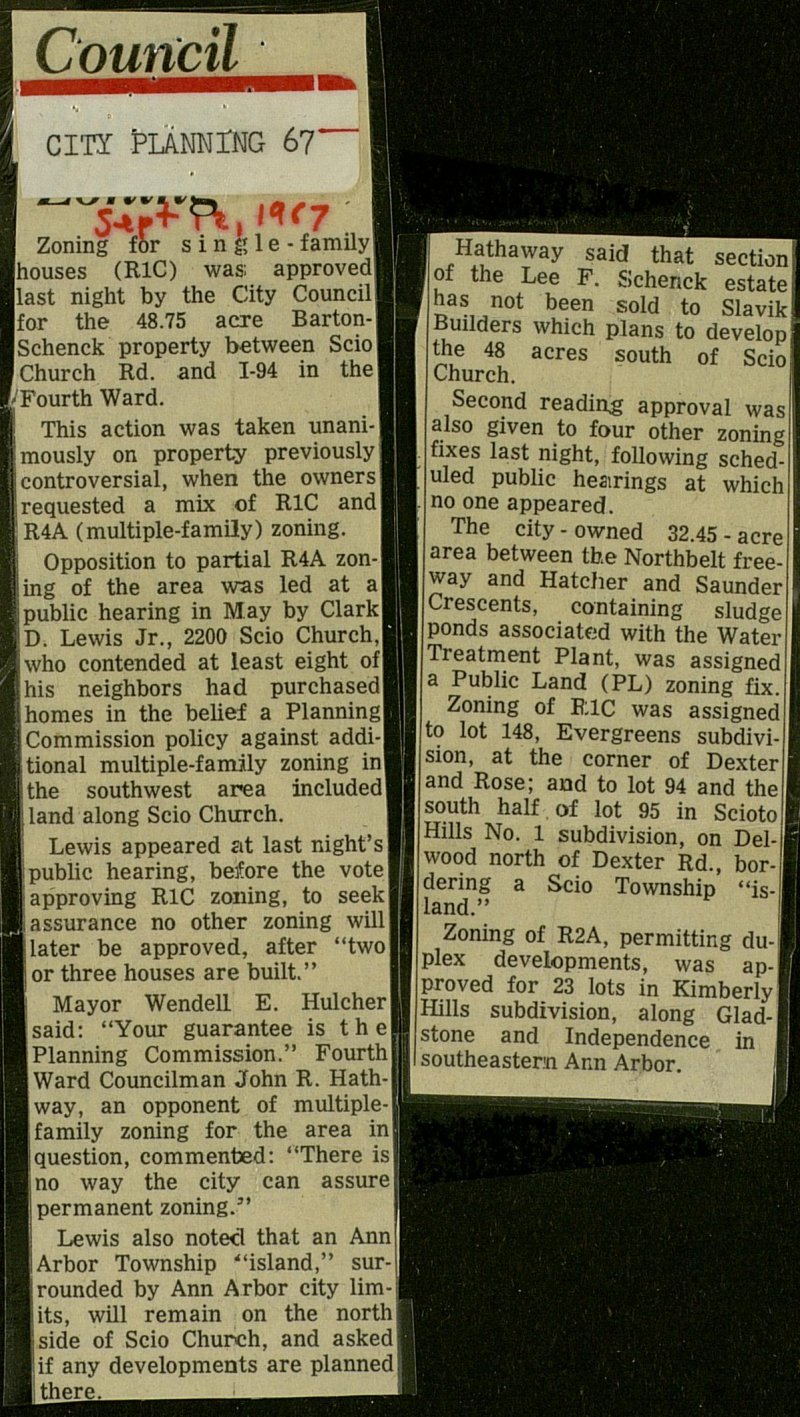 Zoning for single-family houses (R1C) was; approved last night by the City Councili for the 48.75 acre Barton-Schenck property between Scio Church Rd. and 1-94 in the Fourth Ward. This action was taken unanimously on property previously controversial, when the owners requested a mix of R1C and R4A (multiple-family) zoning. Opposition to partial R4A zoning of the area was led at a public hearing in May by Clark D. Lewis Jr., 2200 Scio Church, who contended at least eight of his neighbors had purchased homes in the belief a Planning Commission policy against additional multiple-family zoning in the southwest area included land alone Scio Church. Lewis appeared at last night's public hearing, before the vote approving R1C zoning, to seek assurance no other zoning will later be approved, after "two or three houses are built." Mayor Wendell E. Hulcherl said: "Your guarantee is the Planning Commission." Fourth Ward Councilman John R. Hathaway, an opponent of multiple-family zoning for the area in question, commented: "There is no way the city can assure permanent zoning." Lewis also noted that an Ann Arbor Township "island," surrounded by Ann Arbor city limits, will remain on the north side of Scio Church, and asked if any developments are planned there. Hathaway said that section of the Lee F. Schenck estate has not been sold to Slavik Builders which plans to develop the 48 acres south of Scio Church. Second reading approval was also given to four other zoning fixes last night, following scheduled public hearings at which no one appeared. The city-owned 32.45 - acre área between the Northbelt freeway and Hatcher and Saunder Crescents, containing sludge ponds associated with the Water Treatment Plant, was assigned a Public Land (PL) zoning fix. Zoning of R1C was assigned to lot 148, Evergreens subdivision, at the comer of Dexter and Rose; and to lot 94 and the south half of lot 95 in Scioto Hills No. I subdivision, on Delwood north of Dexter Rd., bordering a Scio Township "island." Zoning of R2A, permitting duplex developments, was approved for 23 lots in Kimberly Hills subdivision, along Gladstone and Independence in southeastern Ann Arbor.