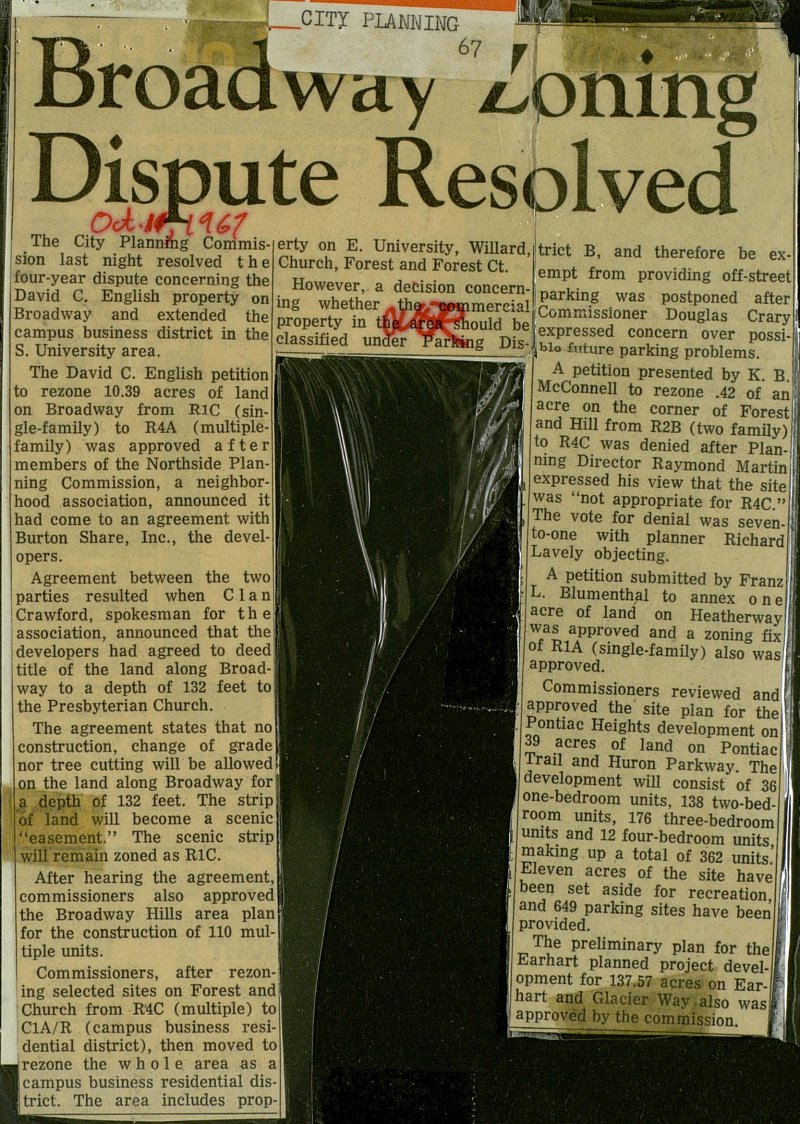 The City Planning Commisjsion last night resolved the four-year dispute concerning the David C. English property on Broadway and extended the campus business district in the S. University area. The David C. English petition to rezone 10.39 acres of land on Broadway f rom R3C (single-family) to R4A (multiplefamily) was approved a f t e r members of the Northside Planning Commission, a neighborhood association, announced it had come to an agreement with Burton Share, Inc., the developers. Agreement between the two parties resulted when Clan Crawford, spokesman for thel association, announced that the developers had agreed to deed title of the land along Broadway to a depth of 132 feet to the Presbyterian Church. The agreement states that no construction, change of grade nor tree cutting will be allowed on the land along Broadway for a depth of 132 feet. The strip of land will become a scenic "easement." The scenic strip will remain zoned as R1C. After hearing the agreement, commissioners also approved the Broadway Hills area plan for the construction of 110 multiple units. Commissioners, after rezoning selected sites on Forest and Church from R4C (multiple) to C1AR (campus business residential district), then moved to rezone the whole area as a campus business residential district. The area includes property on E. University, William, Church, Forest and Forest Ct. However, a decision concerning whether the commercial property in the area should be classified under Parking District B , and therefore be exempt from providing off-street parking was postponed after Commissioner Douglas Crary expressed concern over possibio future parking problems. A petition presented by K. B. McConnell to rezone .42 of an acre on the corner of Forest and Hill from R2B (two-family) to R4C was denied after Planning Director Raymond Martin expressed his view that the site was "not appropriate for R4C." The vote for denial was seven-to-one with planner Richard Oavely objecting. A petition submitted by Franz L. Blumenthal to annex one acre of land on Heatherway was approved and a zoning fix of R1A (single-family) also was approved. Commissioners reviewed and approved the site plan for the Pontiac Heights development on 39 acres of land on Pontiac Trail and Huron Parkway The development will consist of 36 one-bedroom units, 138 two-bedroom units, 176 three-bedroom units and 12 four-bedroom units making up a total of 362 units. Eleven acres of the site have been set aside for recreation and 649 parking sites have been provided. The preliminary plan for the Earhart planned project development for 137.57 acres on Earhart and Glacier Way also wast approved by the commission.