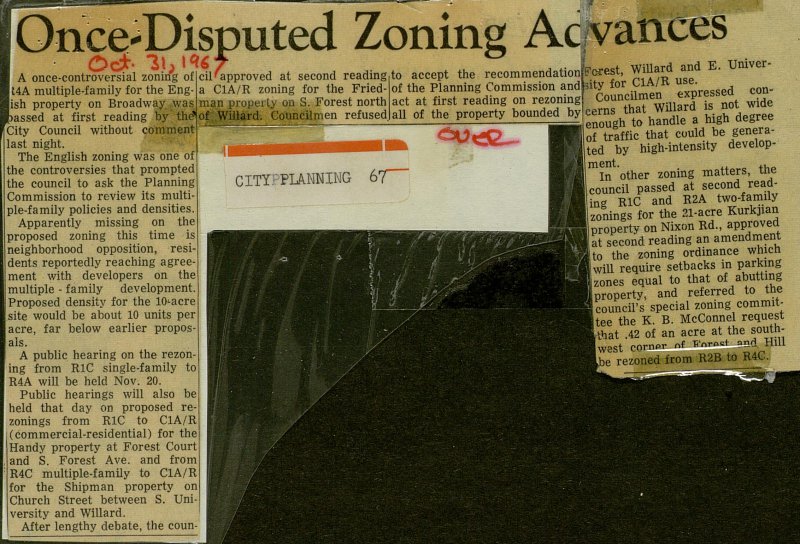 A once-controversial zoning of R4A multiple-family for the English property on Broadway was passed at first reading by City Council without conment last night. The English zoning was one of the controversies that prompted the council to ask the Planning Commission to review its multiple-family policies and densities. Apparently missing on the proposed zoning this time is neighborhood opposition, residents reportedly reaching agreement with developers on the multiple - family development. Proposed density for the 10-acre site would be about 10 units per acre, far below earlier proposals. A public hearing on the rezoning from R1C single-family to R4A will be held Nov. 20. Public hearings will also be held that day on proposed rezonings from RlC to CIAR (commercial-residential) for the Handy property at Forest Court and S. Forest Ave. and from R4C multiple-family to C1AR for the Shipman property on Church Street between S. University and Willard. After lengthy debate, the council approved at second reading a C1AR zoning for the Fried property on S. Forest north of Willard. Councilmen refused to accept the recommendation of the Planning Commission and act at first reading on rezoning all of the property bounded by Forest, Willard and E. University for C1A/R use. Councilmen expressed concerns that Willard is not wide enough to handle a high degree of traffic that could be generated by high-intensity development. In other zoning matters, the council passed at cnd reading R1C and R2A two-family zonings for the 21-acre Kurkjian property on Nixon Rd., approved at second reading an amendment lo the zoning ordinance which will require setbacks in parking zones equal to that of abutting property, and referred to the council's special zoning committee the K. B. McConnell request that .42 of an acre at the southwest corner of Forest and Hill be rezoned from R2B toR4C.