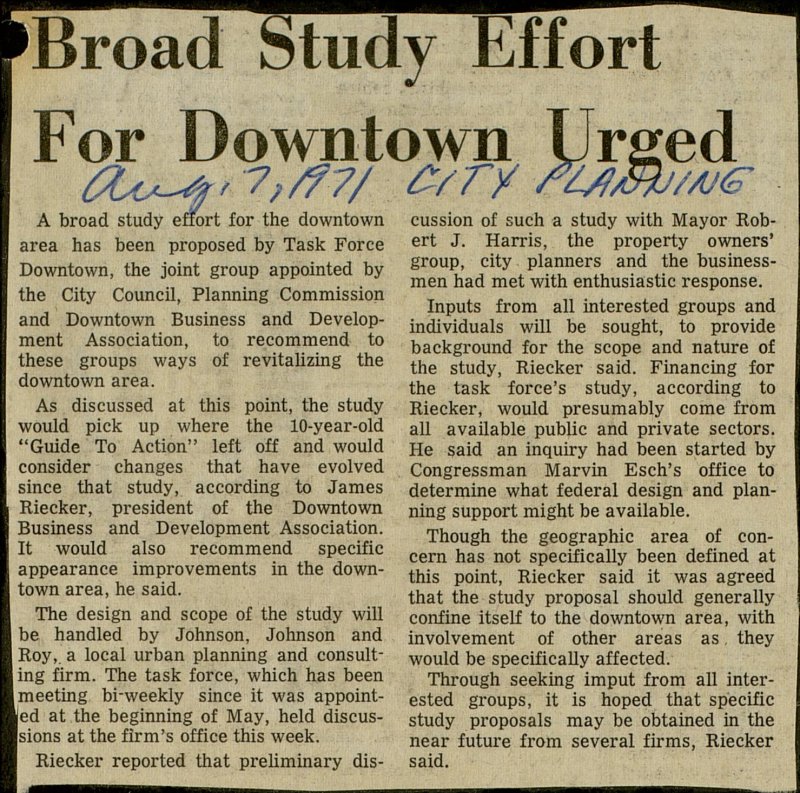 A broad study effort for the downtown area has been proposed by Task Force Downtown, the joint group appointed by the City Council, Planning Commission and Downtown Business and Development Association, to recommend to these groups ways of revitalizing the downtown area. As discussed at this point, the study would pick up where the 10-year-old "Guide To Action" left off and would consider changes that have evolved since that study, according to James Riecker, president of the Downtown Business and Development Association. It would also recommend specific appearance improvements in the downtown area, he said. The design and scope of the study will be handled by Johnson, Johnson and Roy, a local urban planning and consulting firm. The task force, which has been meeting bi-weekly since it was appointed at the beginning of May, held discussions at the firm's office this week. Riecker reported that preliminary dicussion of such a study with Mayor Robert J. Harris, the property owners' group, city planners and the businessmen had met with enthusiastic response. Inputs from all interested groups and individuals will be sought, to provide background for the scope and nature of the study, Riecker said. Financing for the task force's study, according to Riecker, would presumably come from all available public and private sectors. He said an inquiry had been started by Congressman Marvin Esch's office to determine what federal design and planning support might be available. Though the geographic area of concern has not specifically been defined at this point, Riecker said it was agreed that the study proposal should generally confine itself to the downtown area, with involvement of other areas as they would be specifically affected. Through seeking input from all interested groups, it is hoped that specific study proposals may be obtained in the near future from several firms, Riecker said.