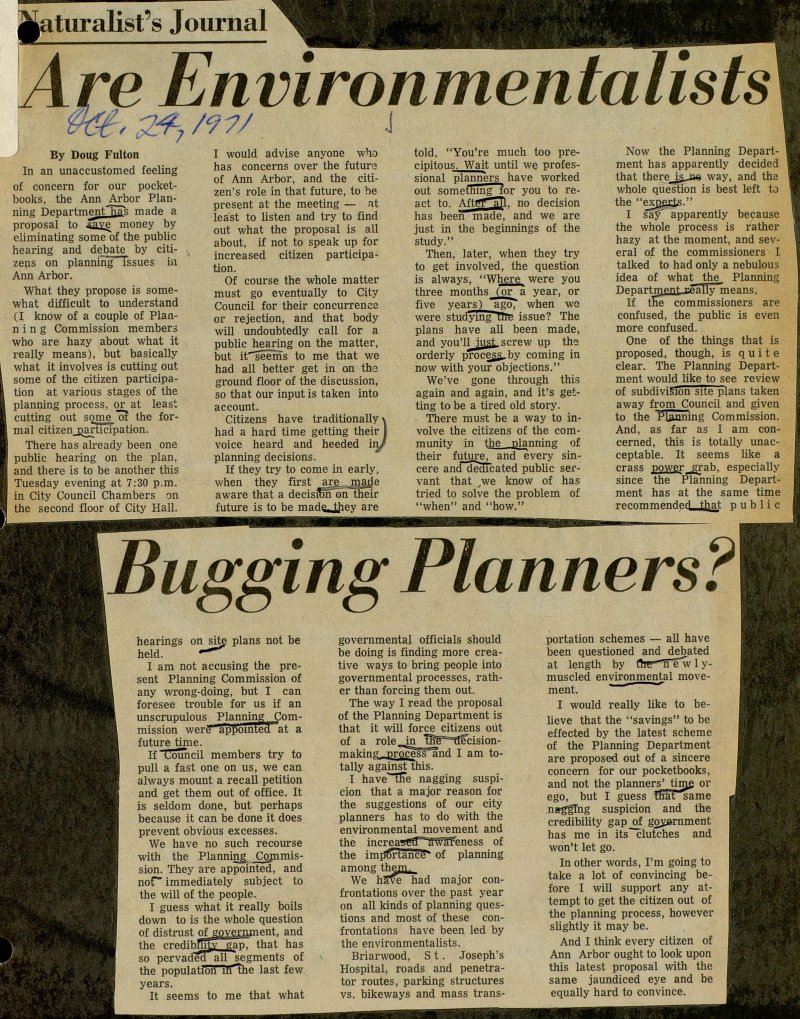 In an unaccustomed feeling of concern for our pocketbooks, the Ann Arbor Planning Department'hTs made a proposal to .saïL money by eliminating some of the public hearing and debate by citizens on planning issues in Ann Arbor. What they propose is somewhat difficult to understand (I know of a couple of Plann i n g Commission members who are hazy about what it really means), but basically what it involves is cutting out some of the citizen participation at varipus stages of the planning process, or at least cutting out some öï the formal citizen_Larticipation. There has already been one public hearing on the plan, and there is to be another this Tuesday evening at 7:30 p.m. in City Council Chambers on the second floor of City Hall. I would advise anyone who has concerns over the future of Ann Arbor, and the citizen's role in that future, to be present at the meeting - at least to listen and try to find out what the proposal is all about, if not to speak up for increased citizen participation. Of course the whole matter must go eventually to City Council for their concurrenee or rejection, and that body will undoubtedly cali for a public hearing on the matter, but itliëims to me that we had all better get in on the ground floor of the discussion, so that óur input is taken into account. Citizens have traditionally had a hard time getting their j voice heard and heeded iij planning decisions. If they try to come in early, when they first are_maje aware that a decisíraon their future is to be madejhey are told, "You're much too precipitous. Wait until we professional planners have worked out something"?or you to react to. Aftgf áll. no decisión has been made, and we are just in the beginnings of the study." Then, later, when they try to get in volved, the question is always, "Where were you three months (orá year, or five years) ago, when we were studying me issue? The plans have all been made, and vmi'lljust screw up tha orderly procegs-bv coming in now with your objections." We've gone through this again and again, and it's getting to be a tired old story. There must be a way to involve the citizens of the community in the planning of their future, and every sincere andde"ciïcated public servant that ,we know of has tried to solve the problem of "when" and "how." Now the Planning I ment has apparently decided I that therejjw way, and the I whole question is best left to 1 the "pYp,rs ." I say" apparently because the whole process is rather hazy at the moment, and several of the commissioners I talked to had only a nebulous idea of what the. Planning Departmejotjêally'means. If thecommissioners are confused, the public is even more confused. One of the things that is proposed, though, is quite clear. The Planning Department would like to see review of subdivisión site plans taken away from Council and given to the Planning Commission. And, as far as I am concerned, this is totally unacceptable. It seems like a crass power grab, especially since the Planning Department has at the same time recommendecLJÈat public hearings on site plans not be held. "" I am not accusing the present Planning Commission of any wrong-doing, but I can foresee trouble for us if an unscrupulous Planning Commission were appointed at a future time. If Council members try to pull a fast one on us, we can always mount a recall petition and get them out of office. It is seldom done, but perhaps because it can be done it does prevent obvious excesses. We have no such recourse with the Planning Jmmission. They are appointed, and nof" immediately subject to the will of the people. I guess what it really boils down to is the whole question of distrust ofj goyernment, and the credibffify gapT that has so pervadecl all egments of the populatlóTTifTThe last few years. It seems to me that what governmental officials should be doing is finding more creative ways to bring people into governmental processes, rather than forcing them out. The way I read the proposal of the Planning Department is that it will force citizens out of a role,„inJiftrÖ?cisionmaking_proicess and I am totally against this. I haveTïïe nagging suspicion that a major reason for the suggestions of our city planners has to do with the environmental movement and the increasefawafeness of the imptrtance of planning among them. We havehad major confrontations over the past year on all kinds of planning questions and most of these confrontations have been led by the environmentalists. Briarwood, S t . Joseph's Hospital, roads and penetrator routes, parking structures vs. bikeways and mass portation schemes - all have been questioned and debated at length by fhCTTëw 1 ymuscled environmental movement. I would really like to believe that the "savings" to be effected by the latest scheme of the Planning Department are proposed out of a sincere concern for our pocketbooks, and not the plannerstinje or ego, but I guess ïfiafsame nsfglng suspicion and the credibility gapof gojiernment has me in its clutches and won't let go. In other words, I'm going to take a lot of convincing before I will support any attempt to get the citizen out of the planning process, however slightly it may be. And I think every citizen of Ann Arbor ought to look upon this latest proposal with the same jaundiced eye and be equally hard to convince.