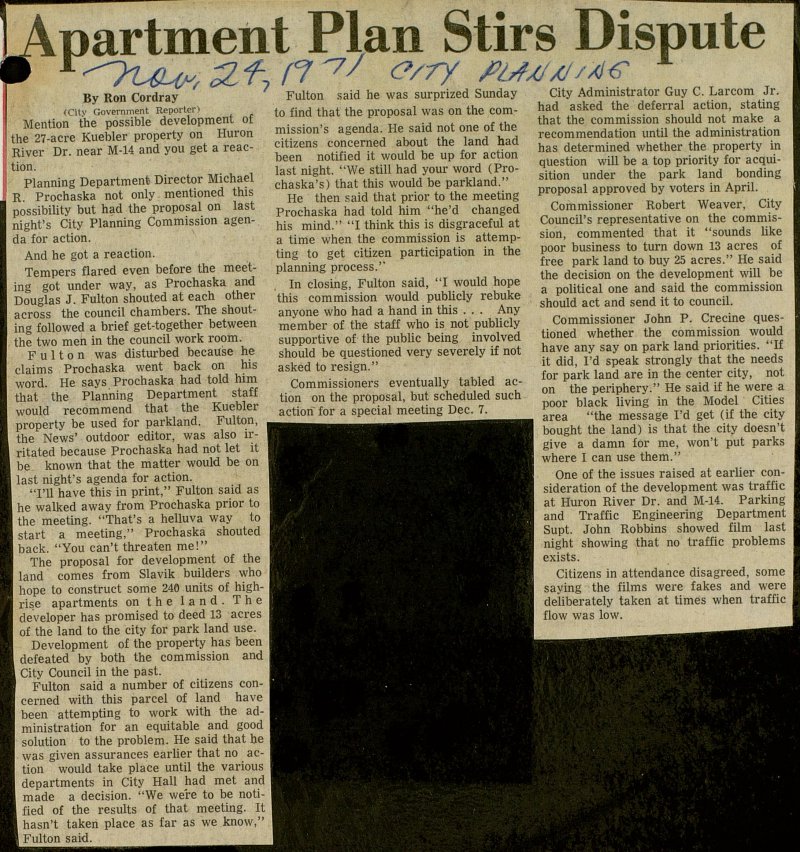 Mention the possible development of the 27-acre Kuebler property on Huron River Dr. near M-14 and you get a reaction. Planning Department Director Michael R Prochaska not only mentioned this possibility but had the proposal on last night's City Planning Commission agenda for action. And he got a reaction. Tempers flared even before the meeting got under way, as Prochaska and Douglas J. Fulton shouted at each other across the council chambers. The ing followed a brief get-together between the two men in the council work room. F u 1 1 o n was disturbed becaUse he claims Prochaska went back on his word. He says Prochaska had told him that the Planning Department staff would recommend that the Kuebler property be used for parkland. Fulton, ( the News' outdoor editor, was also irritated because Prochaska had not let it be known that the matter would be on last night's agenda for action. 'Til have this in print," Fulton said as he walked away from Prochaska prior to the meeting. "That's a helluva way to start a meeting," Prochaska shouted hack. "You can't threaten me!" The proposal for development of the land comes from Slavik builders who hope to construct some 240 units of highrise apartments on the land. The developer has promised to deed 13 acres of the land to the city for park land use. Development of the property has been defeated by both the commission and City Council in the past. Fulton said a number of citizens concerned with this parcel of land have been attempting to work with the administration for an equitable and good solution to the problem. He said that he was given assurances earlier that no action would take place until the various departments in City Hall had met and made a decisión. "We were to be notified of the results of that meeting. It hasn't taken place as far as we know," Fulton said. Fulton said he was surprized Sunday to find that the proposal was on the commission's agenda. He said not one of the citizens concerned about the land had been notified it would be up for action last night. "We still had your word (Prochaska's) that this would be parkland." He then said that prior to the meeting Prochaska had told him "he'd changed his mind." "I think this is disgraceful at a time when the commission is attempting to get citizen participation in the planning process.'" In closing, Fulton said, "I would hope this commission would publicly rebuke anyone who had a hand in this . . . Any member of the staff who is not publicly supportive of the public being involved should be questioned very severely if not asked to resign." Commissioners eventually tabled action on the proposal, but scheduled such action for a special meeting Dec. 7. City Adminístrate Guy C. Larcom Jr. had asked the deferral action, stating that the commission should not make a recommendation until the administration has determined whether the property in question will be a top priority for acquisition under the park land bonding proposal approved by voters in April. Commissioner Robert Weaver, City Council's representative on the commission, commented that it "sounds like poor business to turn down 13 acres of free park land to buy 25 acres." He said the decisión on the development will be a political one and said the commission should act and send it to council. Commissioner John P. Crecine questioned whether the commission would have any say on park land priorities. "If it did, I'd speak strongly that the needs for park land are in the center city, not on the periphery." He said if he were a poor black living in the Model Cities area "the message I'd get (if the city bought the land) is that the city doesn't give a damn ior me, won't put parks j where I can use them." One of the issues raised at earlier consideration of the development was traffic at Huron River Dr. and M-14. Parking and Traffic Engineering Department Supt. John Robbins showed film last ! night showing that no traffic problems exists. Citizens in attendance disagreed, some ; saying the films were fakes and were deliberately taken at times when traffic ! flow was low.