No Decision Near On Land Use Plan 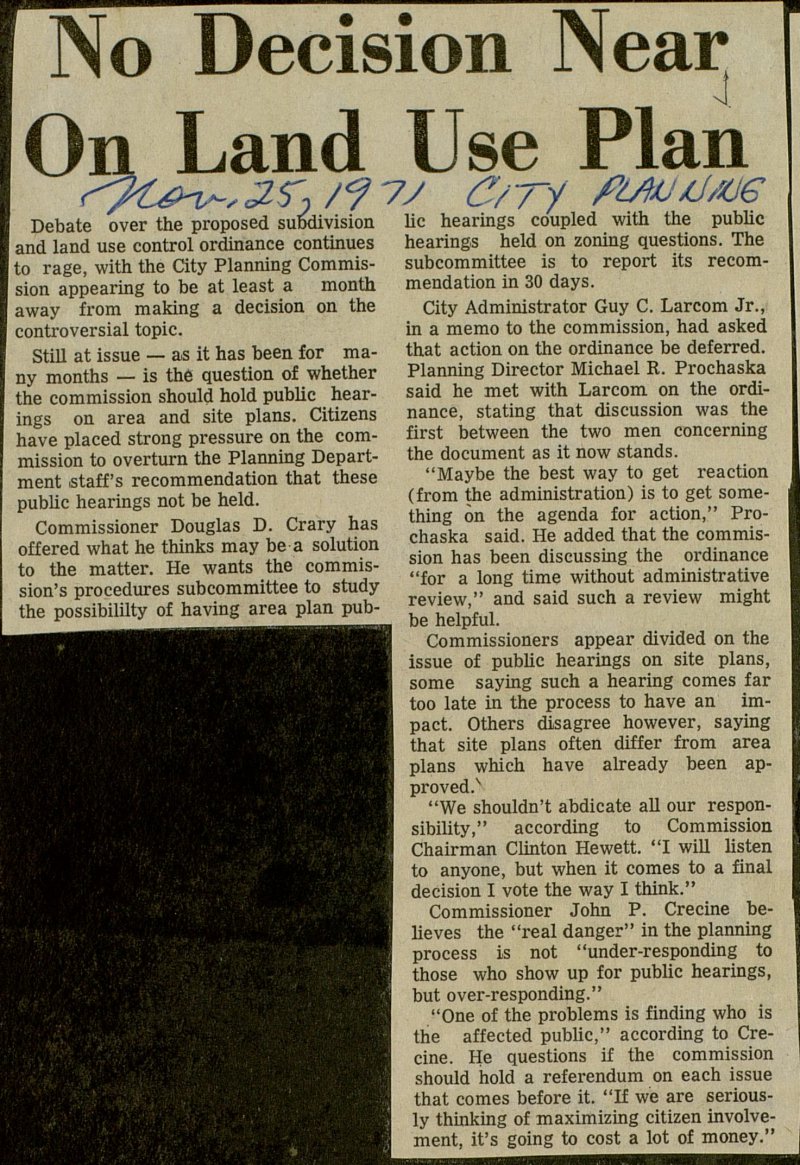 Debate over the proposed subdivisión and land use control ordinance continúes to rage, with the City Planning Commission appearing to be at least a month away from making a decisión on the controversial topic. Still at issue - as it has been for many months - is the question of whether the commission should hold public hearings on area and site plans. Citizens have placed strong pressure on the commission to overturn the Planning Department staff's recommendation that these public hearings not be held. Commissioner Douglas D. Crary has offered what he thinks may be a solution to the matter. He wants the commission's procedures subcommittee to study the possibililty of having area plan lic hearings coupled with the public hearings held on zoning questions. The subcommittee is to report its recommendation in 30 days. City Administrator Guy C. Larcom Jr., in a memo to the commission, had asked that action on the ordinance be deferred. Planning Director Michael R. Prochaska said he met with Larcom on the ordinance, stating that discussion was the first between the two men concerning the document as it now stands. "Maybe the best way to get reaction (from the administration) is to get something on the agenda for action," Prochaska said. He added that the commission has been discussing the ordinance "for a long time without administrative review," and said such a review might be helpful. Commissioners appear divided on the issue of public hearings on site plans, some saying such a hearing comes far too late in the process to have an impact. Others disagree however, saying that site plans often differ from area plans which have already been approved." "We shouldn't abdicate all our responsibility," according to Commission Chairman Clinton Hewett. "I will listen to anyone, but when it comes to a final decisión I vote the way I think." Commissioner John P. Crecine believes the "real danger" in the planning process is not "under-responding to those who show up for public hearings, but over-responding." "One of the problems is finding who is the affected public," according to Crecine. He questions if the commission should hold a referendum on each issue that comes before it. "If we are seriously thinking of maximizing citizen involvement, it's going to cost a lot of money."