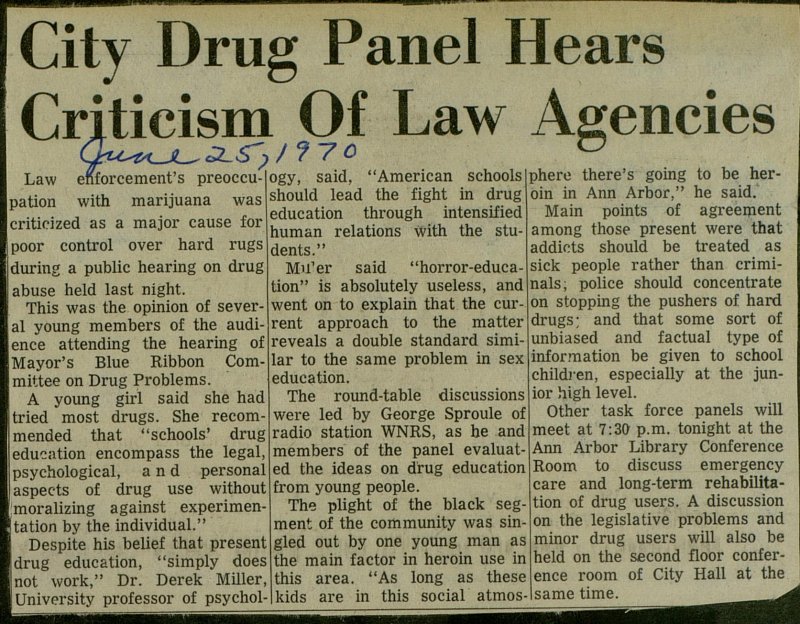 Law enforcement's preoccupation with marijuana was criticized as a major cause for poor control over hard rugs during a public hearing on drug abuse held last night. This was the opinión of several young members of the audience attending the hearing of Mayor's Blue Ribbon Committee on Drug Problems. A young girl said she had tried most drugs. She recommended that "schools' drug education encompass the legal, psychological, and personal aspects of drug use without moralizing against experimenItation by the individual." Despite his belief that present drug education, "simply does not work," Dr. Derek Miller University professor of ogy, said, "American schools should lead the fight in drug education through intensified luman relations With the students." Mü'er said "horror-edueation" is absolutely useless, and went on to explain that the current approach to the matter reveáis a doublé standard similar to the same problem in sex education. The round-table discussions were led by George Sproule of radio station WNRS, as he and members of the panel evaluated the ideas on drug education from young people. The plight of the black segment of the community was singled out by one young man as the main factor in heroin use in this area. "As long as these kids are in this social atmos phere there's going to be heroin in Ann Arbor," he said. Main points of agreement among those present were that addicts should be treated as sick people rather than crimináis; pólice should concéntrate on stopping the pushers of hard drugs; and that some sort of unbiased and factual type of information be given to school childien, especially at the junior high level. Other task force panels will meet at 7:30 p.m. tonight at the Ann Arbor Library Conference Room to discuss emergency care and long-term rehabilitation of drug users. A discussion on the legislative problems and minor drug users will also be held on the second floor conference room of City Hall at the same time.