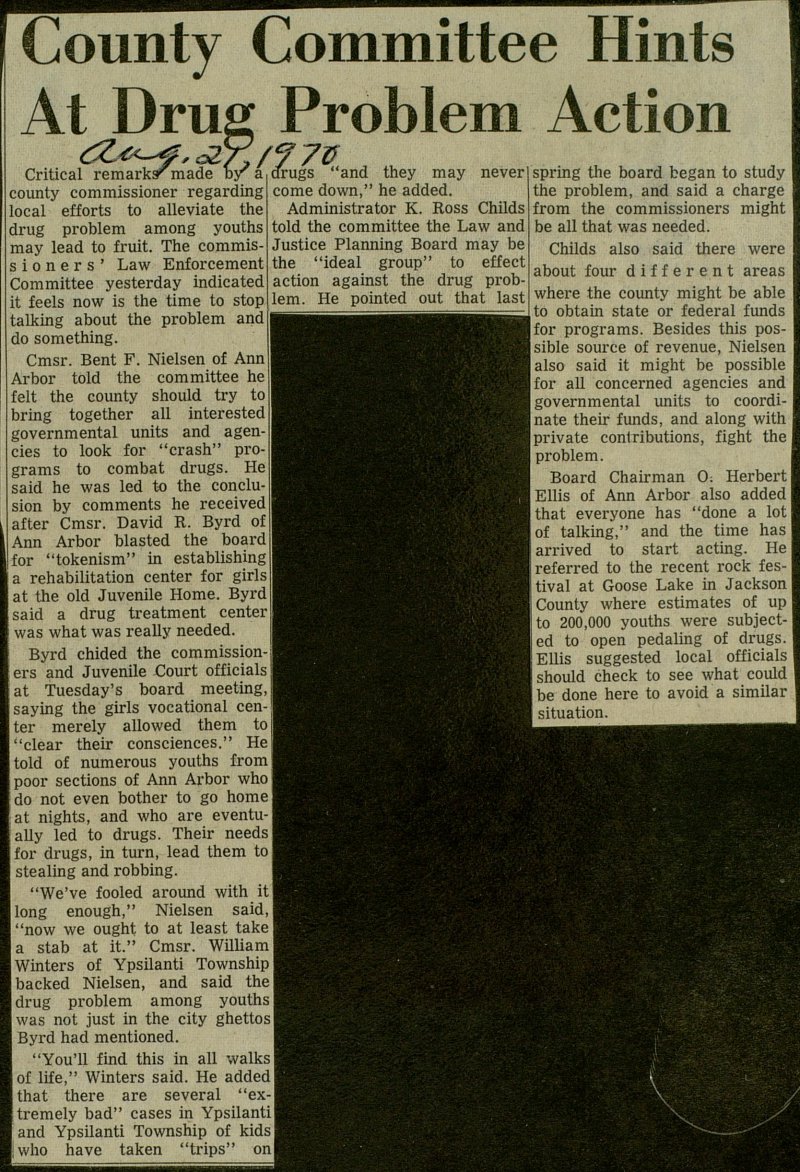 Critical remarks made by county commissioner regarding local efforts to alleviate the drug problem among youths may lead to fruit. The commissioners' Law Enforcement Committee yesterday indicated it feels now is the time to stop talking about the problem and do something. Cmsr. Bent F. Nielsen of Ann Arbor told the committee he felt the county should try to bring together all interested governmental units and agencies to look for "crash" programs to combat drugs. He said he was led to the conclusion by comments he received after Cmsr. David R. Byrd of Ann Arbor blasted the board for "tokenism" in establishing a rehabilitation center for girls at the old Juvenile Home. Byrd said a drug treatment center was what was really needed. Byrd chided the commissioners and Juvenile Court officials at Tuesday's board meeting, saying the girls vocational center merely allowed them to "clear their consciences." He told of numerous youths from poor sections of Ann Arbor who do not even bother to go home at nights, and who are eventually led to drugs. Their needs for drugs, in turn, lead them to stealing and robbing. "We've fooled around with it long enough," Nielsen said, "now we ought to at least take a stab at it." Cmsr. William Winters of Ypsilanti Township backed Nielsen, and said the drug problem among youths was not just in the city ghettos Byrd had mentioned. "You'll find this in all walks of life," Winters said. He added that there are several "extremely bad" cases in Ypsilanti and Ypsilanti Township of kids who have taken "trips" on drugs "and they may never come down," he added. Administrator K. Ross Childs told the committee the Law and Justice Planning Board may be the "ideal group" to effect action against the drug problem. He pointed out that last spring the board began to study the problem, and said a charge from the commissioners might be all that was needed. Childs also said there were about four different areas where the county might be able to obtain state or federal funds for programs. Besides this possible source of revenue, Nielsen also said it might be possible for all concerned agencies and governmental units to coordinate their funds, and along with private contributions, fight the problem. Board Chairman O. Herbert Ellis of Ann Arbor also added that everyone has "done a lot of talking," and the time has arrived to start acting. He referred to the recent rock festival at Goose Lake in Jackson County where estimates of up to 200,000 youths were subjected to open pedaling of drugs. Ellis suggested local officials should check to see what could be done here to avoid a similar situation.