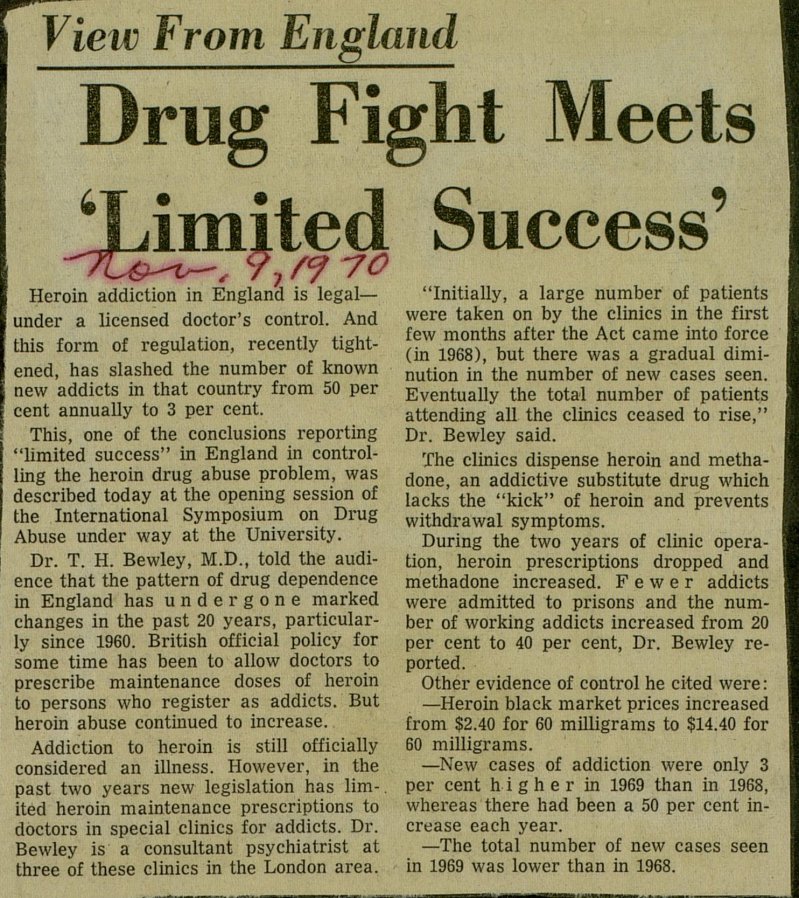 Heroin addiction in England is legal- under a licensed doctor's control. And this form of regulation, recently tightened, has slashed the number of known new addicts in that country from 50 per cent annually to 3 per cent. This, one of the conclusions reporting "limited success" in England in controlling the heroin drug abuse problem, was described today at the opening session of the International Symposium on Drug Abuse under way at the University. Dr. T. H. Bewley, M.D., told the audience that the pattern of drug dependence in England has undergone marked changes in the past 20 years, particularly since 1960. British official policy for some time has been to allow doctors to prescribe maintenance doses of heroin to persons who register as addicts. But heroin abuse continued to increase. Addiction to heroin is still officially considered an illness. However, in the past two years new legislation has . ited heroin maintenance prescriptions to doctors in special clinics for addicts. Dr. Bewley is a consultant psychiatrist at three of these clinics in the London area. "Initially, a large number of patients were taken on by the clinics in the first few months after the Act carne into forcé i (in 1968), but there was a gradual diminution in the number of new cases seen. Eventually the total number of patients attending all the clinics ceased to rise," Dr. Bewley said. The clinics dispense heroin and I done, an addictive substitute drug which I lacks the "kick" of heroin and prevents I withdrawal symptoms. During the two years of clinic I tion, heroin prescriptions dropped and I methadone increased. F e w e r addicts I were admitted to prisons and the number of working addicts increased from 20 per cent to 40 per cent, Dr. Bewley reported. Other evidence of control he cited were : - Heroin black market prices increased from $2.40 for 60 milligrams to $14.40 for 60 milligrams. - New cases of addiction were only 3 per cent high er in 1969 than in 1968, whereas there had been a 50 per cent increase each year. -The total number of new cases seen in 1969 was lower than in 1968.