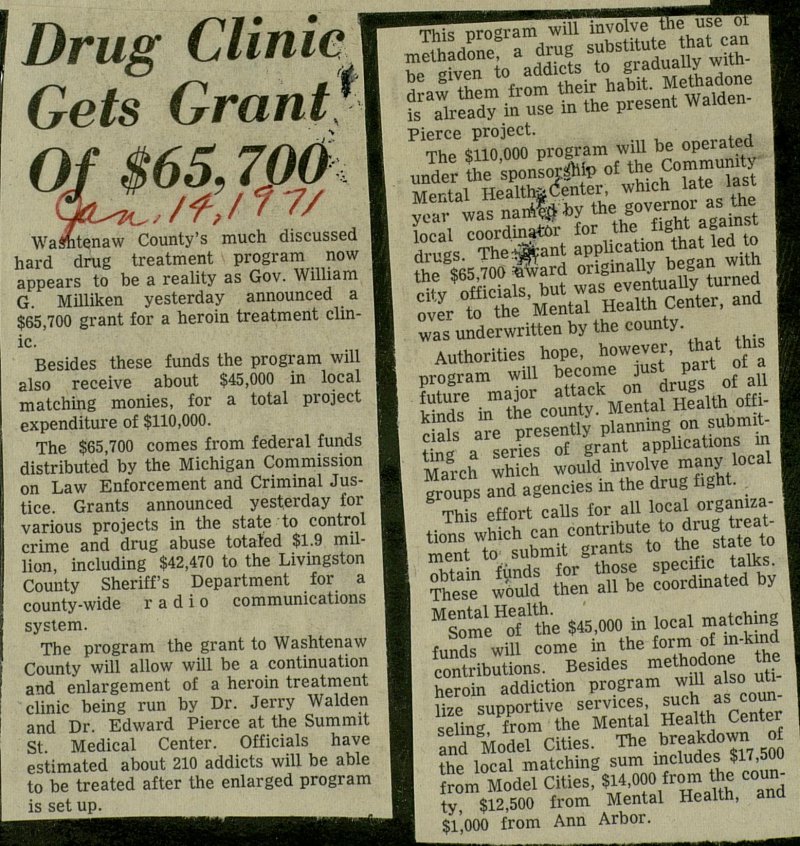 WaShtenaw County's much discussed I hard drug treatment program now I appears to be a reality as Gov. William G. Milliken yesterday announced a $65,700 grant for a heroin treatment clinic. Besides these funds the program will also receive about $45,000 in local I matching monies, for a total project expenditure of $110,000. The $65,700 comes from federal funds distributed by the Michigan Commission on Law Enforcement and Criminal Justice. Grants announced yesterday for various projects in the state to control crime and drug abuse totaíed $1.9 million, including $42,470 to the Livingston County Sheriff's Department for a county-wide radio Communications system. The program the grant to Washtenaw County will allow will be a continuation and enlargement of a heroin treatment clinic being run by Dr. Jerry Walden and Dr Edward Pierce at the Summit St Medical Center. Officials have estimated about 210 addicts will be able to be treated after the enlarged program is set up. ■SfTn.-ram will mu.Wc U,u li I üSÜís Pierce project. j The $110 000 program fcffl be operated I=È -SStSS waSunderwrittenbythecounty groups and agencies in the drug fight. This effort calis for all local 1 MS'mlHÓi"e $45,000 i local m.lcking Sand Model Cities. The breakdown o ?he local matching sum includes $17,500 ïom Model Cities, $14,000 from the county $12,500 from Mental Health, ana Sl',000 from Ann Arbor.