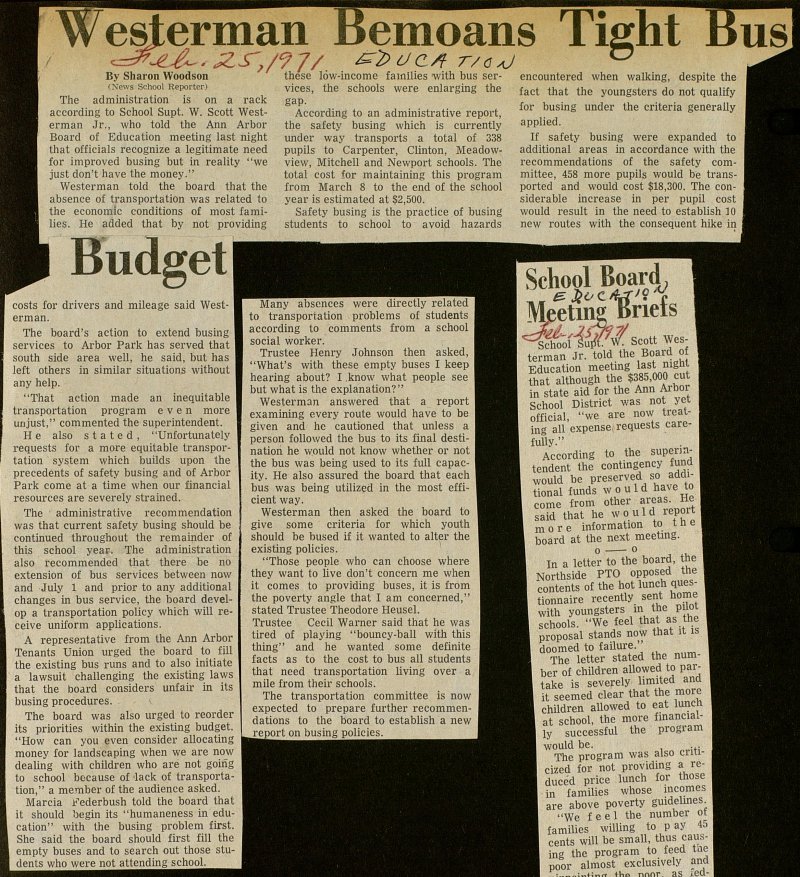 The administration is on a rack according to School Supt. W. Scott Westerman Jr., who told the Ann Arbor Board of Education meeting last night that officials recognize a legitímate need for improved busing but in reality "we just don't have the money." Westerman told the board that the absence of transportation was related to the economie conditions of most families. He added that by not providing these lów-income families with bus services, the schools were enlarging the gap. According to an administrative report, the safety busing which is currently under way transports a total of 338 pupils to Carpenter, Clinton, Meadowview, Mitchell and Newport schools. The total cost for maintaining this program from March 8 to the end of the school year is estimated at $2,500. Safety busing is the practice of busing students to school to avoid hazards encountered when walking, despite the fact that the youngsters do not qualify for busing under the criteria generally applied. If safety busing were expanded to additional areas in accordance with the recommendations of the safety committee, 458 more pupils would be transported and would cost $18,300. The considerable increase in per pupil cost would result in the need to establish 10 new routes with the consequent hike in i costs for drivers and mileage said I erman. The board's action to extend busing I services to Arbor Park has served that I south side área well, he said, but has left others in similar situations without any help. "That action made an inequitable transportation program even more unjust," commented the superintendent. H e also s t a t e d , "Unfortunately requests for a more equitable transportation system which builds upon the precedents of safety busing and of Arbor Park come at a time when our financial resources are severely strained. The administrative recommendation was that current safety busing should be continued throughout the remainder of this school year. The administration also recommended that there be no extensión of bus services between now and July 1 and prior to any additional changes in bus service, the board develop a transportation policy which will receive uniform applications. A representative from the Ann Arbor Tenants Union urged the board to fill the existing bus runs and to also initiate a lawsuit challenging the existing laws that the board considers unfair in its busing procedures. The board was also urged to reorder its priorities within the existing budget. "How can you even consider allocating money for landscaping when we are now dealing with children who are not going to school because of lack of transportation," a member of the audience asked. Marcia Federbush told the board that it should begin its "humaneness in eduI catión" with the busing problem first. She said the board should first fill the 1 empty buses and to search out those stuI dents who were not attending school. Many absences were directly related to transportation problems of students I according to comments from a school social worker. Trustee Henry Johnson then asked, "What's with these empty buses I keep hearing about? I .know what people see but what is the explanation?" Westerman answered that a report examining every route would have to be given and he cautioned that unless a person followed the bus to its final destination he would not know whether or not the bus was being used to its full capacity. He also assured the board that each bus was being utilized in the most efficiënt way. Westerman then asked the board to give some criteria for which youth should be bused if it wanted to alter the existing policies. "Those people who can choose where they want to Üve don't concern me when it comes to providing buses, it is from the poverty angle that I am concerned," stated Trustee Theodore Heusel. Trustee Cecil Warner said that he was tired of playing "bouncy-ball with this thing" and he wanted some definite facts as to the cost to bus all students that need transportation living over a mile from their schools. The transportation committee is now expected to prepare further recommendations to the board to establish a new _ report on busing policies.