Pupil Advisory School Board Is Proposed 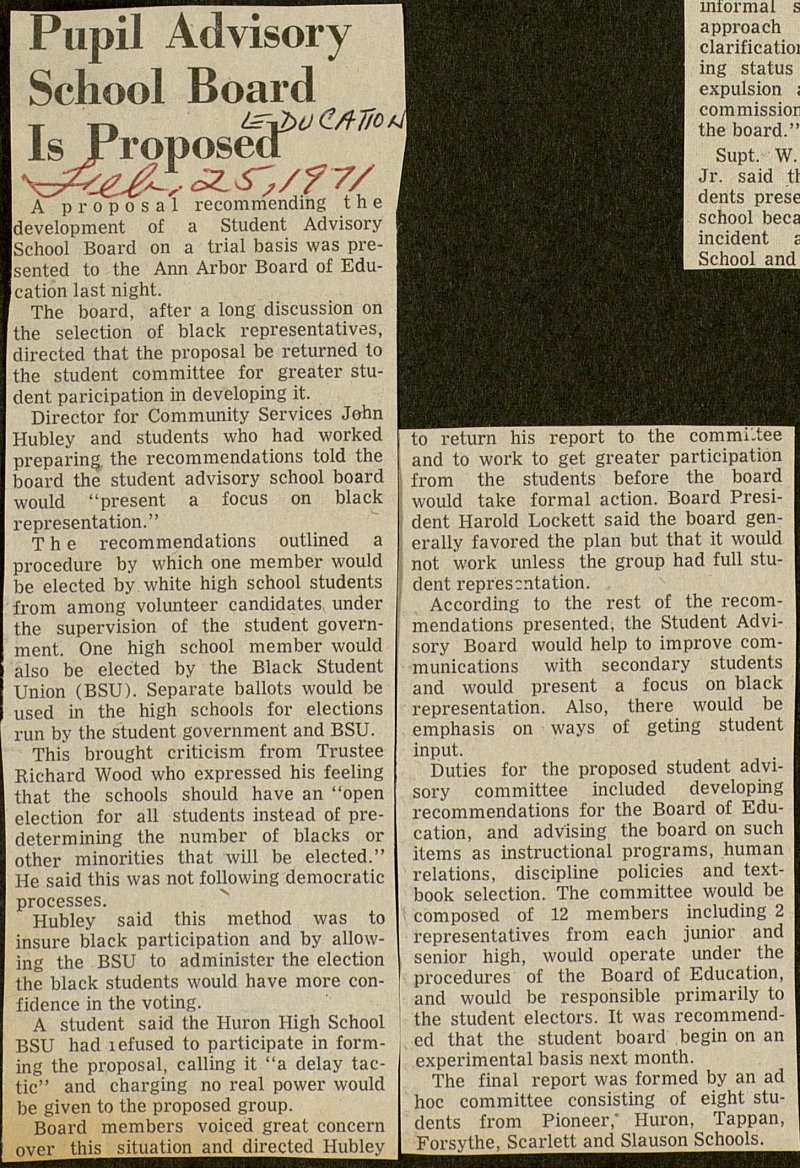 A proposal recommending the development of a Student Advisory School Board on a trial basis was presented to the Ann Arbor Board of Education last night. The board, after a long discussion on the selection of black representatives, directed that the proposal be returned to the student committee for greater student paricipation in developing it. Director for Community Services John Hubley and students who had worked preparing the recommendations told the board the student advisory school board would "present a focus on black representation." The recommendations outlined a procedure by which one member would be elected by white high school students from among volunteer candidates under the supervisión of the student government. One high school member would also be elected by the Black Student Union (BSU). Separate ballots would be used in the high schools for elections run by the student government and BSU. This brought criticism from Trustee Richard Wood who expressed his feeling that the schools should have an "open election for all students instead of predetermining the number of blacks or other minorities that will be elected." He said this was not following democratie processes. Hubley said this method was to insure black participation and by allowing the BSU to administer the election the black students would have more confidence in the voting. A student said the Huron High School BSU had ïefused to particípate in forming the proposal, calling it "a delay tactic" and charging no real power would be given to the proposed group. Board members voiced great concern over this situation and directed Hubley to return his report to the commi.tee and to work to get greater participation from the students before the board i would take formal action. Board Presii dent Harold Lockett said the board geni erally favored the plan but that it would i not work unless the group had full student represcntation. According to the rest of the recommendations presented, the Student Advisory Board would help to improve communications with secondary students and would present a focus on black representation. Also, there would be emphasis on ways of geting student input. Duties for the proposed student advisory committee included developing reeommendations for the Board of Education, and advising the board on such items as instructional programs, human relations, discipline policies and textbook selection. The committee would be composed of 12 members including 2 representatives from each junior and senior high, would opérate under the procedures of the Board of Education, and would be responsible primarily to the student electors. It was recommended that the student board begin on an experimental basis next month. The final report was formed by an ad hoc committee consisting of eight students from Pioneer," Huron, Tappan, Fnrsvthe. Scarlett and Slauson Schools.