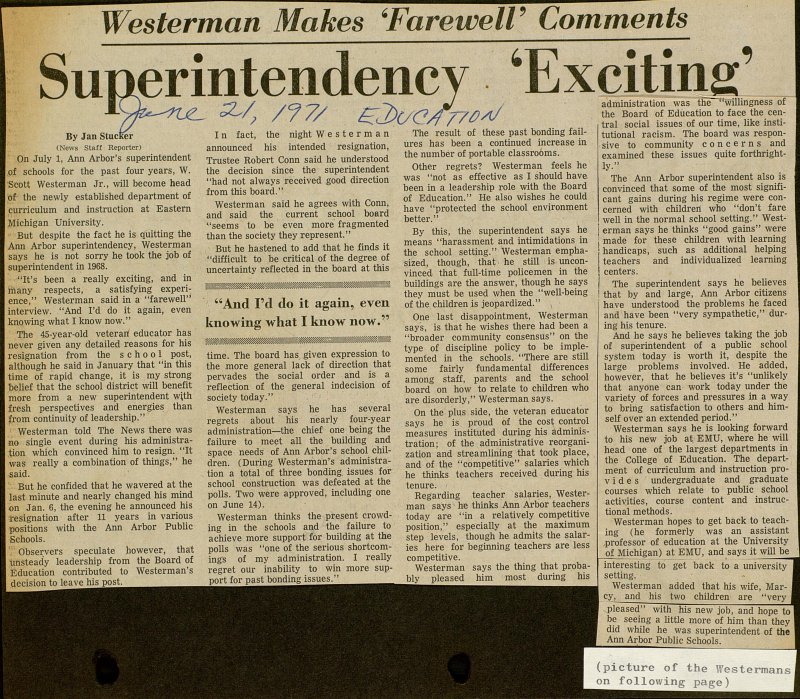 On July 1, Ann Arbor's superintendent of schools for the past four years, W. Scott Westerman Jr., will become head of the newly established department of curriculum and instruction at Eastern Michigan University. But despite the fact he is quitting the Ann Arbor superintendency, Westerman says he is not sorry he took the job of superintendent in 1968. "It's been a really exciting, and in many respects, a satisfying experience," Westerman said in a "farewell" interview. "And I'd do it again, even knowing what I know now." The 45-year-old veteran educator has never given any detailed reasons for his resignation from the school post, although he said in January that "in this time of rapid change, it is my strong belief that the school district will benefit more from a new superintendent with fresh perspectives and energies than from continuity of leadership." Westerman told The News there was no single event during his administration which convinced him to resign. "It was really a combination of things," he said. But he confided that he wavered at the last minute and nearly changed his mind on Jan. 6, the evening he announced his resignation after 11 years in various positions with the Ann Arbor Public Schools. Observers speculate however, that unsteady leadership from the Board of Education contributed to Westerman's decision to leave his post. I n fact, the night Westerman announced his intended resignation, Trustee Robert Conn said he understood the decision since the superintendent "had not always received good direction from this board." Westerman said he agrees with Conn, and said the current school board "seems to be even more fragmented than the society they represent." But he hastened to add that he finds it "difficult to be critical of the degree of uncertainty reflected in the board at this "And I'd do it again, even knowing what I know now." time. The board has given expression to the more general lack of direction that pervades the social order and is a reflection of the general indecision of society today." Westerman says he has several regrets about his nearly four-year administration- the chief one being the failure to meet all the building and space needs of Ann Arbor's school children. (During Westerman's administration a total of three bonding issues for school construction was defeated at the polls. Two were approved, including one on June 14). Westerman thinks the present crowding in the schools and the failure to achieve more support for building at the polls was "one of the serious shortcomings of my administration. I really regret our inability to win more support for past bonding issues." The result of these past bonding failures has been a continued increase in the number of portable classrooms. Other regrets? Westerman feels he was "not as effective as I should have been in a leadership role with the Board of Education." He also wishes he could have "protected the school environment better." By this, the superintendent says he means "harassment and intimidations in the school setting." Westerman emphasized, though, that he still is unconvinced that full-time policemen in the buildings are the answer, though he says they must be used when the "well-being of the children is jeopardized." , One last disappointment, Westerman says, is that he wishes there had been a "broader community consensus" on the type of discipline policy to be implemented in the schools. "There are still some fairly fundamental differences among staff, parents and the school board on how to relate to children who are disorderly," Westerman says. On the plus side, the veteran educator says he is proud of the cost control measures instituted during his administration; of the administrative reorganization and streamlining that took place, and of the "competitive" salaries which he thinks teachers received during his tenure. Regarding teacher salaries, Westerman says he thinks Ann Arbor teachers today are "in a relatively competitive position," especially at the maximum step levels, though he admits the salaries here for beginning teachers are less competitive. Westerman says the thing that probably pleased him most during his administration was the willingness of the Board of Education to face the central social issues of our time, like institutional racism. The board was responsive to community concerns and examined these issues quite forthrightly." The Ann Arbor superintendent also is convinced that some of the most significant gains during his regime were concerned with childreri who "don't f are well in the normal school setting." Westerman says he thinks "good gains" were made for these children with learning handicaps, such as additional helping teachers and individualized learning centers. The superintendent says he believes that by and large, Ann Arbor citizens have understood the problems he faced and have been "very sympathetic," during his tenure. And he says he believes taking the job of superintendent of a public school system today is worth it, despite the large problems involved. He added, however, that he believes it's "unlikely that anyone can work today under the variety of forces and pressures in a way to bring satisfaction to others and himself over an extended period." Westerman says he is looking forward to his new job at EMU, where he will head one of the largest departments in the College of Education. The department of curriculum and instruction provides undergraduate and gradate courses which relate to public school activities, course content and instructional methods. Westerman hopes to get back to teaching (he formerly was an assistant .professor of education at the University of Michigan) at EMU, and says it will be interesting to get back to a university I setting. . Westerman added that his wife, Marcy, and his two children are "very pleased" with his new job, and hope to be seeing a little more of him than they did while he was superintendent of the Ann Arbor Public Schools. (picture of the Westermans on following page)