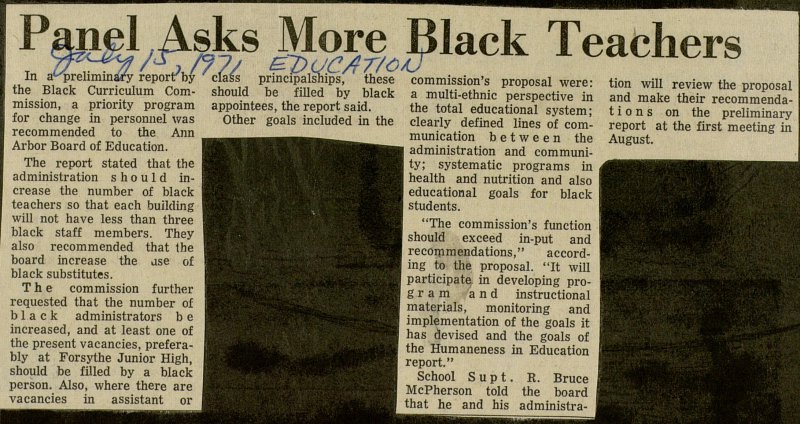 In a preliminary report by the Black Curriculum Commission, a priority program for change in personnel was recommended to the Ann Arbor Board of Education. The report stated that the administration should increase the number of black teachers so that each building will not have less than three black staff members. They also recommended that the board increase the use of black substitutes. The commission further requested that the number of black administrators be increased, and at least one of the present vacancies, preferably at Forsythe Junior High, should be filled by a black person. Also, where there are vacancies in assistant or class principalships, these should be filled by black appointees, the report said. Other goals included in the commission's proposal were: a multi-ethnic perspective in the total educational system; clearly defined lines of communication between the administration and community; systematic programs in health and nutrition and also educational goals for black students. "The commission's function I should exceed in-put and recommendations," according to the proposal. "It will participate in developing program and instructional materials, monitoring and implementation of the goals it has devised and the goals of the Humaneness in Education report." School Supt. R. Bruce McPherson told the board I that he and his administration will review the proposal and make their recommendations on the preliminary report at the first meeting in August.