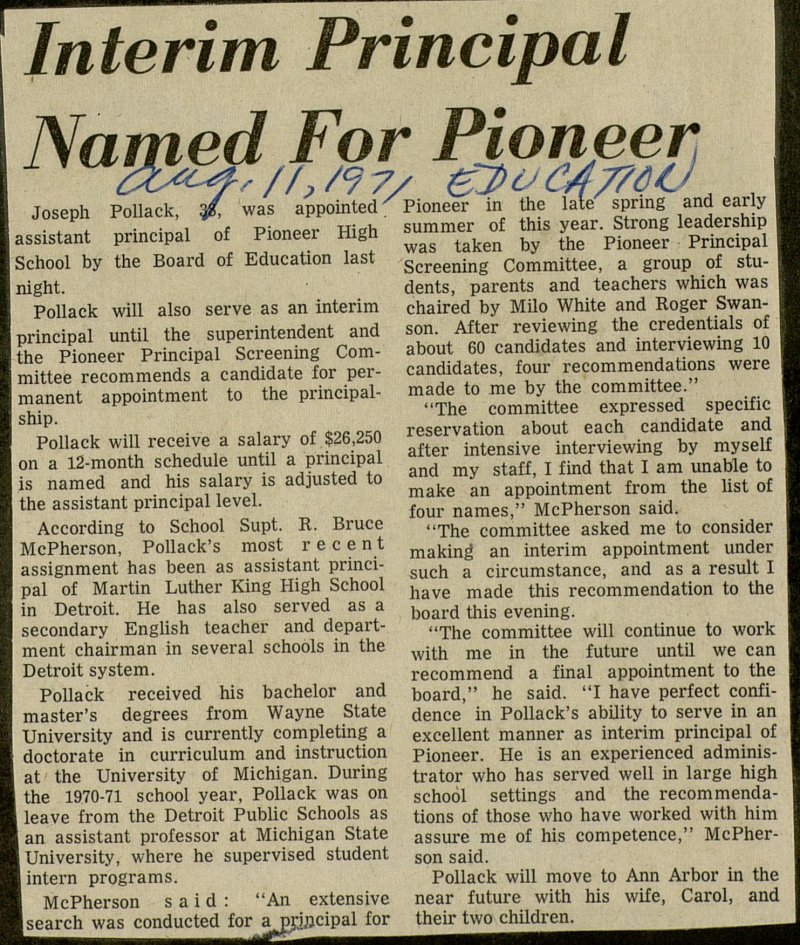 Joseph Pollack, 5 was appointed assistant principal of Pioneer High School by the Board of Education last night. Pollack will also serve as an interim principal until the superintendent and the Pioneer Principal Screening Committee recommends a candidate for permanent appointment to the principalship. Pollack will receive a salary of $26,250 on a 12-month schedule until a principal I is named and his salary is adjusted to the assistant principal level. According to School Supt. R. Bruce McPherson, Pollack's most recent assignment has been as assistant principal of Martin Luther King High School in Detroit. He has also served as a secondary English teacher and department chairman in several schools in the Detroit system. Pollack received his bachelor and master's degrees from Wayne State University and is currently completing a doctórate in curriculum and instruction at the University of Michigan. During I the 1970-71 school year, Pollack was on I leave from the Detroit Public Schools as I an assistant professor at Michigan State I University, where he supervised student I intern programs. McPherson s a i d : "An extensive Isearch was conducted for a priflcipal for Pioneer in the late spring and early I summer of this year. Strong leadership I was taken by the Pioneer Principal I Screening Committee, a group of I dents, parents and teachers which was I chaired by Milo White and Roger I son. After reviewing the credentials of I about 60 candidates and interviewing 10 I candidates, four recommendations were I made to me by the committee." ? "The committee expressed specific I reservation about each candidate and I after intensive interviewing by myself and my staff, I find that I am unable to make an appointment from the list of four names," McPherson said. "The committee asked me to consider making an interim appointment under such a circumstance, and as a result I have made this recommendation to the board this evening. "The committee will continue to work with me in the future until we can recommend a final appointment to the board," he said. "I have perfect confidence in Pollack's ability to serve in an excellent manner as interim principal of Pioneer. He is an experienced administrator who has served well in large high school settings and the recommendations of those who have worked with him assure me of his competence," McPherson said. Pollack will move to Ann Arbor in the near future with his wüe, Carol, and their two children.