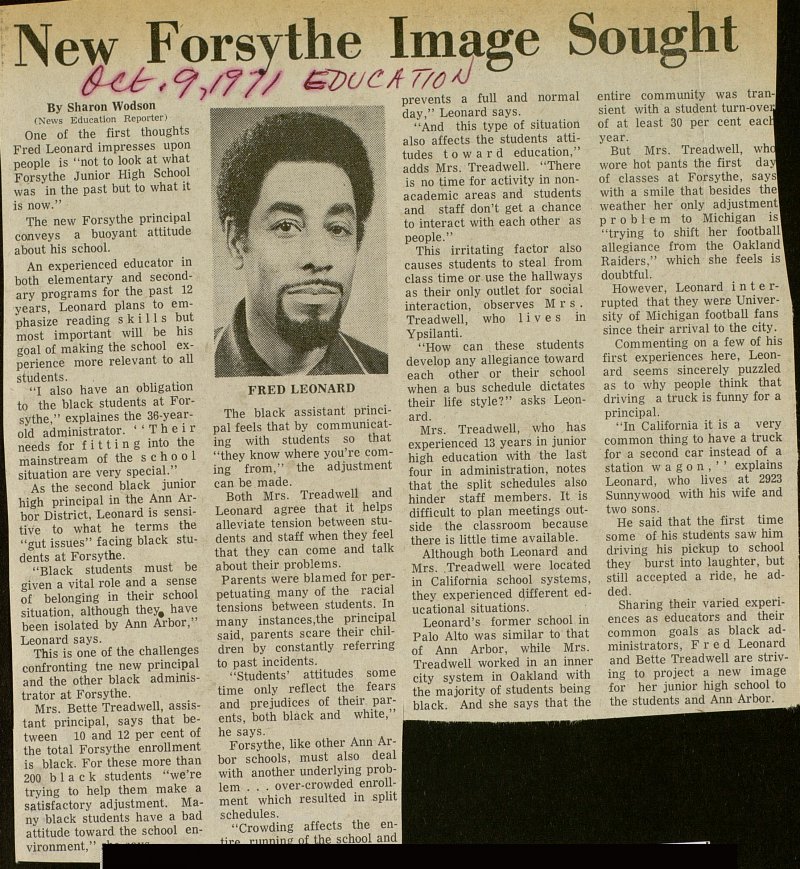 One of the first thoughts Fred Leonard impresses upon people is "not to look at what Fqrsythe Junior High School was in the past but to what it is now." The new Forsythe principal conveys a buoyant attitude about his school. An experienced educator in both elementary and secondary programs for the past 12 years, Leonard plans to emphasize reading s k i 1 1 s but most important will be his goal of making the school experience more relevant to all students. "I also have an obligation to the black students at Forsythe," explains the 36-year old administrator. " T h e i r needs for fitting into the mainstream of the school situation are very special." As the second black junior high principal in the Ann Arbor District, Leonard is sensitive to what he terms the "gut issues" facing black students at Forsythe. "Black students must be given a vital role and a sense of belonging in their school situation, although they, have been isolated by Ann Arbor," Leonard says. This is one of the challenges confronting tne new principal and the other black administrator at Forsythe. Mrs. Bette Treadwell, assistant principal, says that between 10 and 12 per cent of the total Forsythe enrollment is black. For these more than 200 black students "we're trying to help them make a satisfactory adjustment. Many black students have a bad attitude toward the school environment, The black assistant principal feels that by communicating with students so that "they know where you're coming from," the adjustment can be made. Both Mrs. Treadwell and Leonard agree that it helps alleviate tension between students and staff when they feel that they can come and talk about their problems. Parents were blamed for perpetuating many of the racial tensions between students. In many instances,the principal said, parents scare their children by constantly referring to past incidents. "Students' attitudes some time only reflect the fears and prejudices of their parents, both black and white," he says. Forsythe, like other Ann Arbor schools, must also deal with another underlying problem . . . over-crowded enrollment which resulted in split schedules. "Crowding affects the entire running of the schoo andl prevent a full and normal day," Leonard says. "And this type of situation also affects the students attitudes t o w a r d education," adds Mrs. Treadwell. "There is no time for activity in nonacademic areas and students and staff don't get a chance to interact with each other as people." This irritating factor also causes students to steal from class time or use the hallways as their only outlet for social interaction, observes Mrs. Treadwell, who 1 i v e s in Ypsilanti. "How can these students develop any allegiance toward each other or their school when a bus schedule dictates their life style?" asks Leonard. Mrs. Treadwell, who has experienced 13 years in junior high education with the last four in administration, notes that the split schedules also hinder staff members. It is difficult to plan meetings outside the classroom because there is little time available. Although both Leonard and Mrs. Treadwell were located in California school systems, they experienced different educational situations. Leonard's former school in Palo Alto was similar to that of Ann Arbor, while Mrs. Treadwell worked in an inner city system in Oakland with the majority of students being black. And she says that the :ntire community was tran-H sient with a student turn-over jf at least 30 per cent each year. But Mrs. Treadwell, whom wore hot pants the first day of classes at Forsythe, says with a smile that besides the weather her only adjustment problem to Michigan "trying to shift her football allegiance from the Oakland Raiders," which she feels is doubtful. However, Leonard interrupted that they werr University of Michigan football fans since their arrival to the city. Commenting on a few of his first experiences here, Leonard seems sincerely puzzled as to why people think that driving a truck is funny for a principal. "In California it is a very common thing to have a truck for a second car instead of a station wagon,'1 explains Leonard, who lives at 2923 Sunnywood with his wife and two sons. He said that the first time some of his students saw him driving his pickup to school they burst into laughter, but still accepted a ride, he added. Sharing their varied experiences as educators and their common goals as black administrators, F r e d Leonard and Bette Treadwell are striving to project a new image for her junior high school to the students and Ann Arbor.