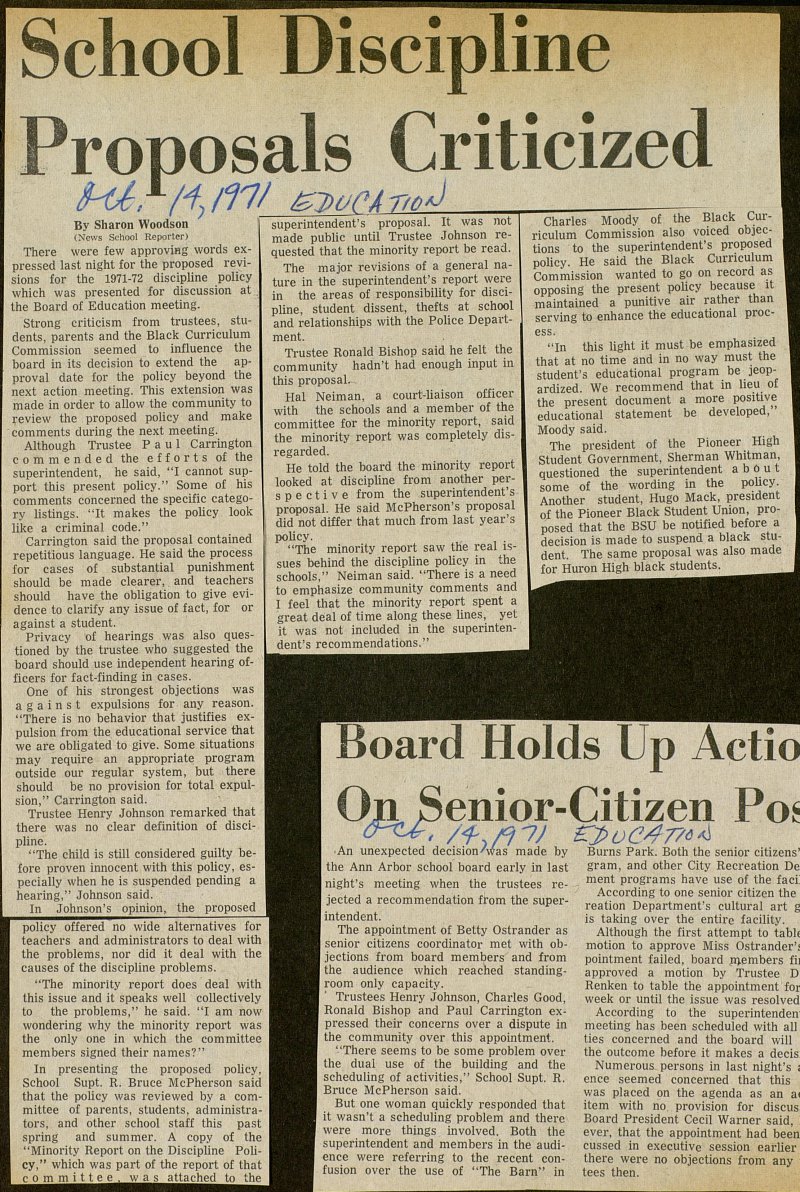 There were few approving words expressed last night for the proposed revisions for the 1971-72 discipline policy which was presented for discussion at . the Board of Education meeting. Strong criticism from trustees, students, parents and the Black Curriculum Commission seemed to influence the board in its decision to extend the approval date for the policy beyond the next action meeting. This extension was made in order to allow the community to review the proposed policy and make comments during the next meeting. Although Trustee Paul Carrington commended the efforts of the superintendent, he said, "I cannot support this present policy." Some of his comments concerned the specific category listings. "It makes the policy look like a criminal code." Carrington said the proposal contained repetitious language. He said the process for cases of substantial punishment should be made clearer, and teachers should have the obligation to give evidence to clarify any issue of fact, for or against a student. Privacy of hearings was also questioned by the trustee who suggested the board should use independent hearing officers for fact-finding in cases. One of his strongest objections was against expulsions for any reason. "There is no behavior that justifies expulsion from the educational service that we are obligated to give. Some situations may require an appropriate program outside our regular system, but there should be no provision for total expulsion," Carrington said. Trustee Henry Johnson remarked that there was no clear definition of discipline. "The child is still considered guilty before proven innocent with this policy, especially when he is suspended pending a hearing," Johnson said. In Johnson's opinion, the proposed policy offered no wide alternatives for teachers and administrators to deal with the problems, nor did it deal with the causes of the discipline problems. "The minority report does deal with this issue and it speaks well collectively to the problems," he said. "I am now wondering why the minority report was the only one in which the committee members signed their names?" In presenting the proposed policy, School Supt. R. Bruce McPherson said that the policy was reviewed by a committee of parents, students, administrators, and other school staff this past spring and summer. A copy of the "Minority Report on the Discipline Policy," which was part of the report of that committee. was attached to the superintendent' s proposal. It was nor made public until Trustee Johnson requested that the minority report be read. The major revisions of a general nature in the superintendent' s report were in the areas of responsibility for discipline, student dissent, thefts at school and relationships with the Pólice Department. Trustee Ronald Bishop said he felt the community hadn't had enough input in this proposal. Hal Neiman, a court-liaison officer with the schools and a member of the committee for the minority report, said the minority report was completely disregarded. He told the board the minority report looked at discipline from another perspective from the superintendent proposal. He said McPherson's proposal did not differ that much from last year's policy. "The minority report saw the real issues behind the discipline policy in the schools," Neiman said. "There is a need to emphasize community comments and I feel that the minority report spent a great deal of time along these lines, yet it was not included in the superintendent recommendations." Charles Moody of the Black Curriculum Commission also voiced I tions to the superintendente proposed ■ policy. He said the Black Curriculum ■ Commission wanted to go on record as ■ opposing the present policy because ït ■ maintained a punitive air rather than I serving to enhance the educational I ess. I "In this light it must be emphasized I that at no time and in no way must the I student's educational program be jeopardized. We recommend that in lieu of the present document a more positive educational statement be developed," Moody said. The president of the Pioneer High Student Government, Sherman Whitman, questioned the superintendent aböut some of the wording in the policy. Another student, Hugo Mack, president of the Pioneer Black Student Union, proposed that the BSU be notified before a decisión is made to suspend a black student. The same proposal was also made for Huron High black students.