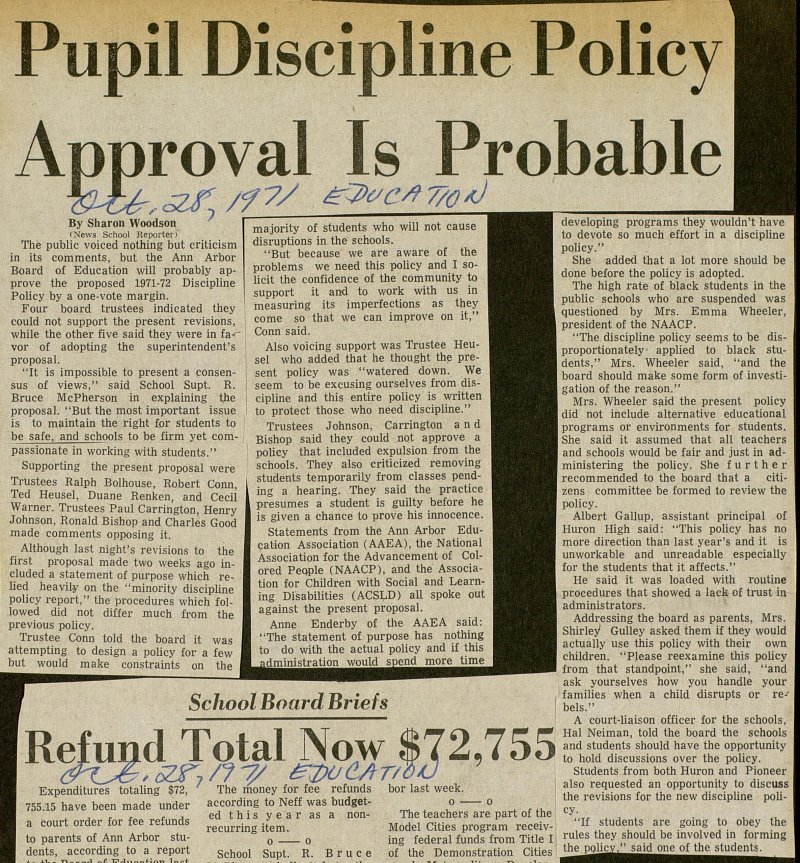 The public voiced nothing but criticism in its comments, but the Ann Arbor Board of Education will probably approve the proposed 1971-72 Discipline Policy by a one-vote margin. Four board trustees indicated they could not support the present revisions, while the other five said they were in favor of adopting the superintendent's proposal. "It is impossible to present a consensus of views," said School Supt. R. Bruce McPherson in explaining the proposal. "But the most important issue is to maintain the right for students to be safe, and schools to be firm yet compassionate in working with students." Supporting the present proposal were Trustees Ralph Bolhouse, Robert Conn, Ted Heusel, Duane Renken, and Cecil Warner. Trustees Paul Carrington, Henry Johnson, Ronald Bishop and Charles Good made comments opposing it. Although last night's revisions to the first proposal made two weeks ago included a statement of purpose which relied heavily on the "minority discipline policy report," the procedures which followed did not differ much from the previous policy. Trustee Conn told the board it was attempting to design a policy for a few but would make constraints on the majority of students who will not cause disruptions in the schools. "But because we are aware of the problems we need this policy and I solicit the confidence of the community to support it and to work with us in measuring its imperfections as they come so that we can improve on it," Conn said. Also voicing support was Trustee Heusel who added that he thought the present policy was "watered down. We ! seem to be excusing ourselves from disicipline and this entire policy is written to protect those who need discipline." Trustees Johnson, Carrington and Bishop said they could not approve a policy that included expulsion from the schools. They also criticized removing students temporarily from classes pending a hearing. They said the practice presumes a student is guilty before he is given a chance to prove his innocence. Statements from the Ann Arbor Education Association (AAEA), the National Association for the Advancement of Colored Pecple (NAACP), and the Association for Children with Social and Learning Disabilities (ACSLD) all spoke out against the present proposal. Anne Enderby of the AAEA said: "The statement of purpose has nothing to do with the actual policy and if this administration would spend more time developing programs they wouldn't have to devote so much effort in a discipline policy." She added that a lot more should be done before the policy is adopted. The high rate of black students in the public schools who are suspended was questioned by Mrs. Emma Wheeler, president of the NAACP. "The discipline policy seems to be disproportionately applied to black students," Mrs. Wheeler said, "and the board should make some form of investigation of the reason." Mrs. Wheeler said the present policy did not include alternative educational programs or environments for students. She said it assumed that all teachers and schools would be fair and just in administering the policy. She f u r t h e r recommended to the board that a citizens committee be formed to review the policy. Albert Gallup, assistant principal of Huron High said: "This policy has no more direction than last year's and it is unworkable and unreadable especially for the students that it affects." He said it was loaded with routine procedures that showed a lack of trust in administrators. Addressing the board as parents, Mrs. Shirley Gulley asked them if they would actually use this policy with their own children. "Please reexamine this policy from that standpoint," she said, "and ask yourselves how you handle your families when a child disrupts or rebels." A court-liaison officer for the schools, Hal Neiman, told the board the schools and students should have the opportunity to hold discussions over the policy. Students from both Huron and Pioneer also requested an opportunity to discuss the revisions for the new discipline policy. "If students are going to obey the rules they should be involved in forming the policy," said one of the students .