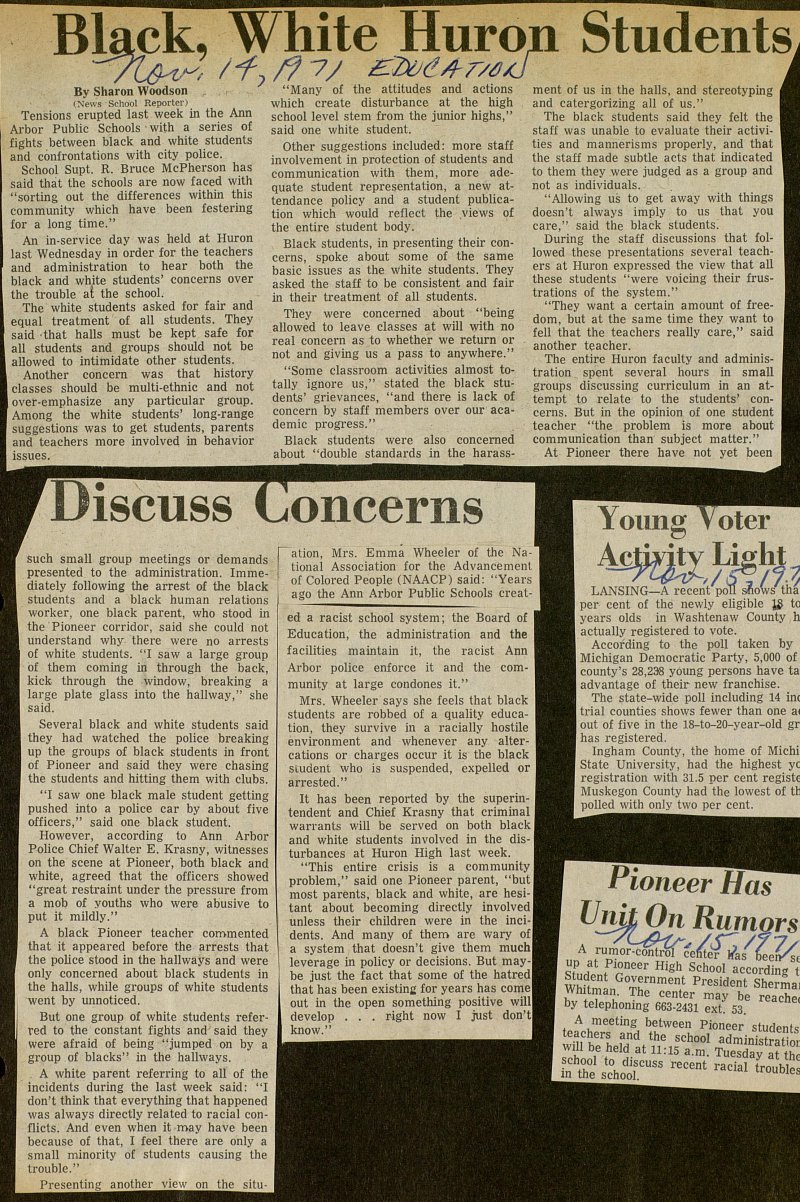 Tensions erupted last week in the Ann Arbor Public Schools with a series of fights between black and white students and confrontations with city police. School Supt. R. Bruce McPherson has said that the schools are now faced with "sorting out the differences within this community which have been festering for a long time." An in-service day was held at Huron last Wednesday in order for the teachers and administration to hear both the black and white students' concerns over the trouble at the school. The white students asked for fair and equal treatment of all students. They said that halls must be kept safe for all students and groups should not be allowed to intimidate other students. Another concern was that history classes should be multi-ethnic and not over-emphasize any particular group. Among the white students' long-range suggestions was to get students, parents and teachers more involved in behavior issues. "Many of the attitudes and actions which create disturbance at the high school level stem from the junior highs," said one white student. Other suggestions included: more staff involvement in protection of students and communication with them, more adequate student representation, a new attendance policy and a student publication which would reflect the ,views of the entire student body. Black students, in presenting their concerns, spoke about some of the same basic issues as the white students. They asked the staff to be consistent and fair in their treatment of all students. They were concerned about "being allowed to leave classes at will with no real concern as to whether we return or not and giving us a pass to anywhere." "Some classroom activities almost totally ignore us," stated the black students' grievances, "and there is lack of concern by staff members over our academic progress." Black students were also concerned about "doublé standards in the ment of us in the halls, and stereotyping and catergorizing all of us." The black students said they felt the staff was unable to evaluate their activities and mannerisms properly, and that the staff made subtle acts that indicated to them they were judged as a group and not as individuals. "Allowing us to get away with things doesn't always imply to us that you care," said the black students. During the staff discussions that followed these presentations several teachers at Huron expressed the view that all these students "were voicing their frustrations of the system." "They want a certain amount of freedom, but at the same time they want to feel that the teachers really care," said another teacher. The entire Huron faculty and administration spent several hours in small groups discussing curriculum in an attempt to relate to the students' concerns. But in the opinion of one student teacher "the problem is more about communication than subject matter." At Pioneer there have not yet been such small group meetings or demands presented to the administration. Immediately following the arrest of the black students and a black human relations worker, one black parent, who stood in the Pioneer corridor, said she could not understand why there were no arrests of white students. "I saw a large group of them coming in through the back, kick through the window, breaking a large plate glass into the hallway," she said. Several black and white students said they had watched the pólice breaking up the groups of black students in front of Pioneer and said they were chasing the students and hitting them with clubs. "I saw one black male student getting pushed into a pólice car by about five officers," said one black student. However, according to Ann Arbor Pólice Chief Walter E. Krasny, witnesses on the scène at Pioneer, both black and white, agreed that the officers showed "great restraint under the pressure from a mob of youths who were abusive to put it mildly." A black Pioneer teacher commented that it appeared before the arrests that the pólice stood in the hallways and were only concerned about black students in the halls, while groups of white students went by unnoticed. But one group of white students referred to the constant fights and said they were afraid of being "jumped on by a group of blacks" in the hallways. . A white parent referring to all of the incidents during the last week said: "I don't think that everything that happened was always directly related to racial conflicts. And even when it may have been because of that, I feel there are only a small minority of students causing the trouble." Presenting another view on the ation, Mrs. Emma Wheeler of the National Association for the Advancement of Colored People (NAACP) said: "Years ago the Ann Arbor Public Schools created a racist school system; the Board of Education, the administration and the faculties maintain it, the racist Ann Arbor pólice enforce it and the community at large condones it." Mrs. Wheeler says she feels that black students are robbed of a quality education, they survive in a racially hostile environment and whenever any altercations or charges occur it is the black student who is suspended, expelled or arrested." It has been reported by the superintendent and Chief Krasny that criminal warrants will be served on both black and white students involved in the disturbances at Huron High last week. "This entire crisis is a community problem," said one Pioneer parent, "but most parents, black and white, are hesitant about becoming directly involved unless their children were in the incidents. And many of them are wary of a system that doesn't give them much leverage in policy or decisions. But maybe just the fact that some of the hatred that has been existing for years has come out in the open something positive will develop . . . right now I just don't know."