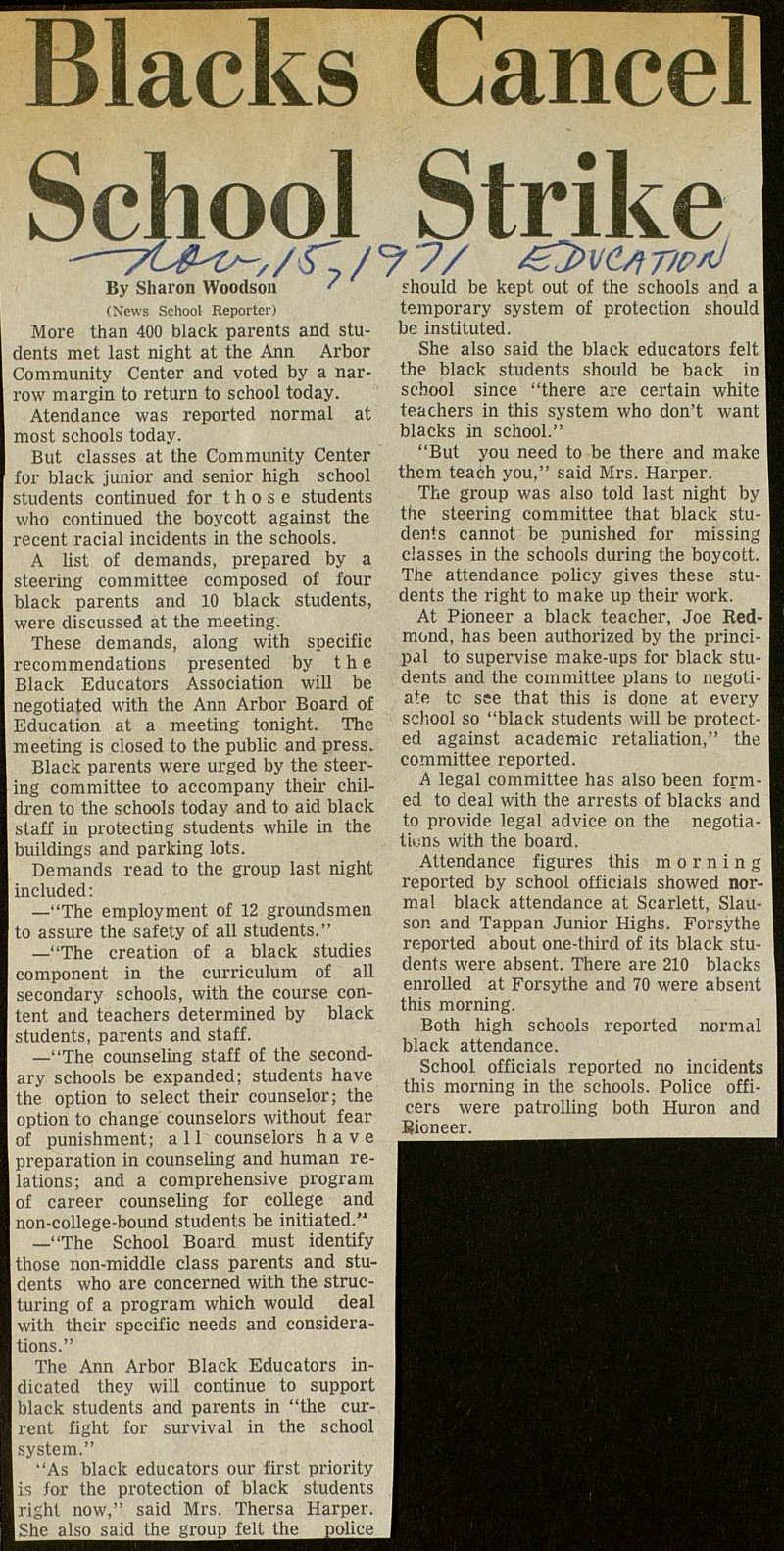 More than 400 black parents and students met last night at the Ann Arbor Community Center and voted by a narrow margin to return to school today. Atendance was reported normal at most schools today. But classes at the Community Center for black junior and senior high school students continued for t h o s e students who continued the boycott against the recent racial incidents in the schools. A list of demands, prepared by a steering committee composed of four black parents and 10 black students, were discussed at the meeting. These demands, along with specific recommendations presented by the Black Educators Association will be negotiated with the Ann Arbor Board of Education at a meeting tonight. The meeting is closed to the public and press. Black parents were urged by the steering committee to accompany their children to the schools today and to aid black staff in protecting students while in the buildings and parking lots. Demands read to the group last night included: -"The employment of 12 groundsmen to assure the safety of all students." -"The creation of a black studies component in the curriculum of all secondary schools, with the course content and teachers determined by black students, parents and staff. -"The counseling staff of the secondary schools be expanded; students have the option to select their counselor; the option to change counselors without fear of punishment; a 1 1 counselors have preparation in counseling and human relations; and a comprehensive program of career counseling for college and non-college-bound students be initiated." -"The School Board must identify those non-middle class parents and students who are concerned with the structuring of a program which would deal with their specific needs and considerations." The Ann Arbor Black Educators indicated they will continue to support black students and parents in "the current fight for survival in the school system." "As black educators our first priority is for the protection of black students righl now," said Mrs. Thersa Harper. Ishe also said the group feit the pólice should be kept out of the schools and a I temporary system of protection should I be instituted. I She also said the black educators feit I the black students should be back inl school since "there are certain white I teachers in this system who don't want I blacks in school." "But you need to be there and make I them teach you," said Mrs. Harper. The group was also told last night by I the steering committee that black I dents cannot be punished for missing classes in the schools during the boycott. The attendance policy gives these students the right to make up their work. At Pioneer a black teacher, Joe Redmond, has been authorized by the I pal to supervise make-ups for black 1 dents and the committee plans to I ate te see that this is done at every I school so "black students will be I ed against academie retaliation," the I committee reported. A legal committee has also been formed to deal with the arrests of blacks and to provide legal advice on the negotiations with the board. Attendance figures this m o r n i n g reported by school officials showed I mal black attendance at Scarlett, Slauson and Tappan Junior Highs. Forsythe reported about one-third of its black students were absent. There are 210 blacks enrolled at Forsythe and 70 were absent this morning. Both high schools reported normal black attendance. School officials reported no incidents this morning in the schools. Pólice officers were patrolling both Huron and Bioneer.