Board Expected To Approve Goals For City Schools 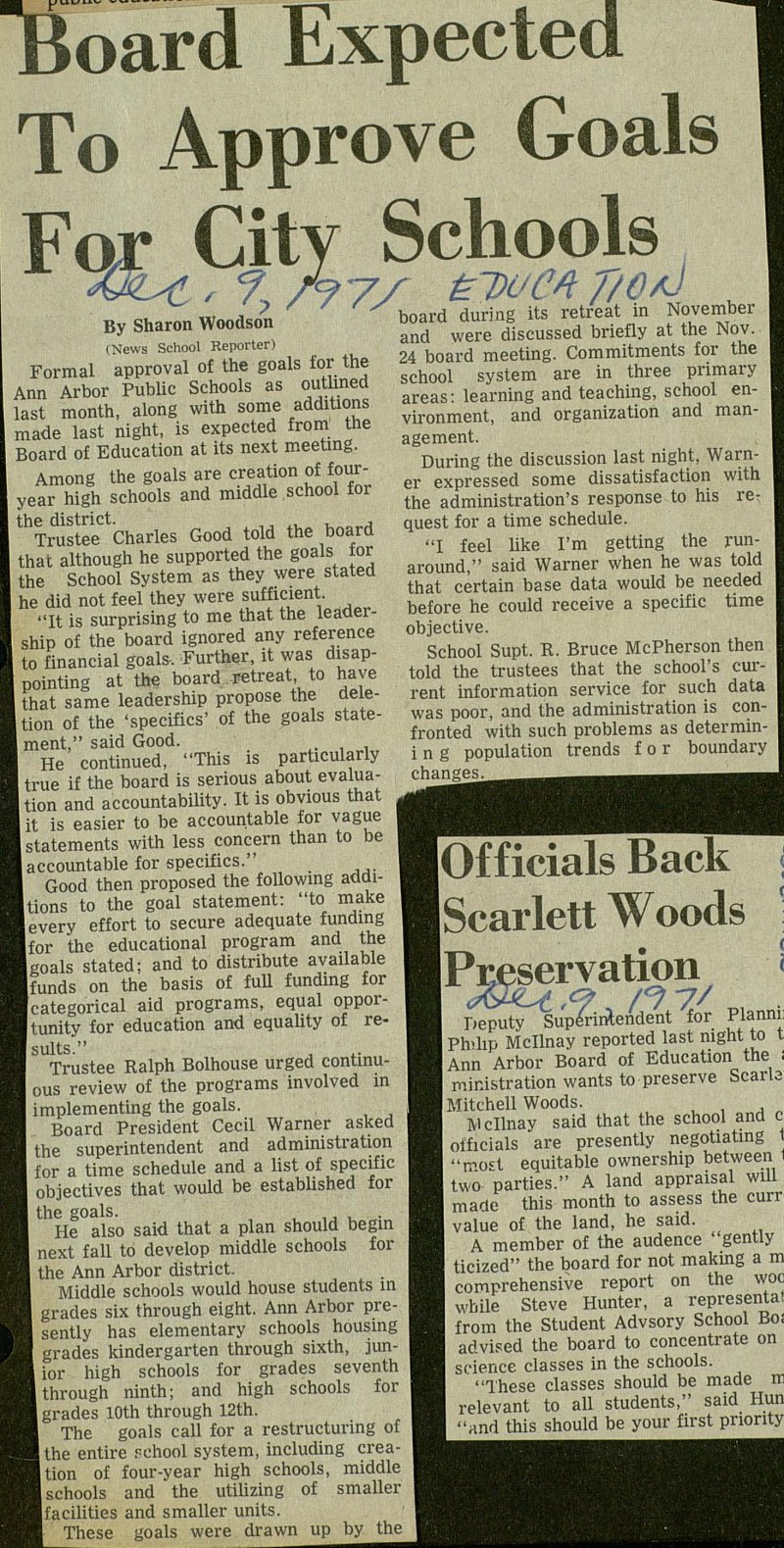 Formal approval of the goals tor the Ann Arbor Public Schools as outhned last month, along with some additions made last night, is expected from; the Board of Education at its next meeting. Among the goals are creation of fouryear high schools and middle school for Trasiefcharles Good told the board that although he supported the goals tor the School System as they were stated he did not f eel they were sufficient "It is surprising to me that the leadership of the board ignored any reference to financial goals-. Further, it was disappointing at the board -retreatto have that same leadership propose the deleItion of the 'specifics' of the goals statement," said Good. . _ He continued, "This is particularly tr„D f the board is serious about tion and accountability. It is obvious that g it is easier to be accountable for vague ■ statements with less concern than to be ■ accountable for speciíics." I Good then proposed the following I tions to the goal statement: "to make I every effort to secure adequate fundmg I for the educational program and the goals stated; and to distribute available funds on the basis of Ml funding for categorical aid programs, equal opportunity for education and equality of results." Trustee Ralph Bolhouse urged continuous review of the programs involved in implementing the goals. . Board President Cecil Warner asked the superintendent and admimstration for a time schedule and a list of specific objectives that would be established for Healso said that a plan should begin I next fall to develop middle schools for I the Ann Arbor district. I Middle schools would house students in I grades six through eight. Ann Arbor preI sently has elementary schools housing I grades kindergarten through sixth, junlior high schools for grades seventh I through ninth; and high schools for I grades lOth through 12th. I The goals cali for a restructunng of I the entire rchool system, including creaItion of four-year high schools, middle (schools and the utilizing of smaller Bfacilities and smaller units. ■ These aoals were drawn up by the board during its retreat in November and were discussed briefly at the Nov. 24 board meeting. Commitments for the school system are in three pnmary areas: learning and teaching, school environment, and organization and management. During the discussion last night, Warner expressed some dissatisfaction with the administration's response to his request for a time schedule. "I feel like I'm getting the runaround," said Warner when he was told that certain base data would be needed before he could receive a specific time objective. School Supt. R. Bruce McPherson then told the trustees that the school's current information service for such data was poor, and the administration is confronted with such problems as determini n g population trends for boundary pViangps. -