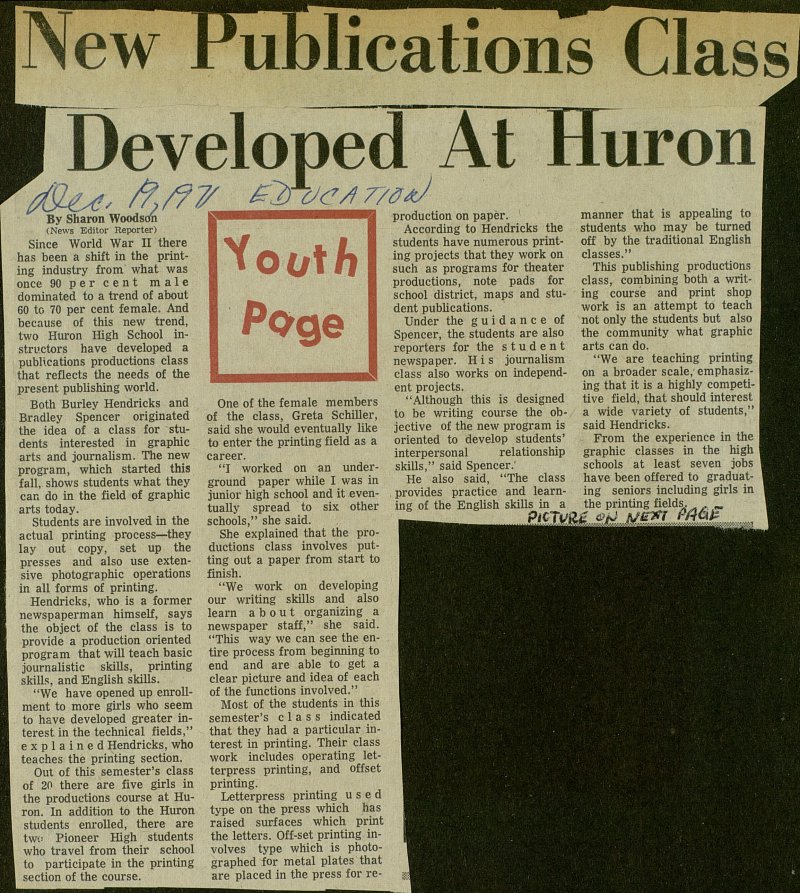 Since World War II there has been a shift in the printing industry from what was once 90 per cent male dominated to a trend of about 60 to 70 per cent female. And because of this new trend, two Huron High School instructors have developed a publications productions class that reflects the needs of the present publishing world. Both Burley Hendricks and Bradley Spencer originated the idea of a class for students interested in graphic arts and journalism. The new program, which started this fall, shows students what they can do in the field of graphic arts today. Students are involved in the actual printing process- they lay out copy, set up the presses and also use extensive photographic operations in all forms of printing. Hendricks, who is a former newspaperman himself, says the object of the class is to provide a production oriented program that will teach basic journalistic skills, printing j skills, and English skills. "We have opened up enrollment to more girls who seem to have developed greater inI terest in the technical fields," explained Hendricks, who teaches the printing section. Out of this semester's class I of 20 there are five girls in the productions course at HuI ron. In addition to the Huron students enrolled, there are I two Pioneer High students I who travel from their school I to particípate in the printing I section of the course. ïootfi Poge One of the female members of the class, Greta Schiller, said she would eventually like to enter the printing field as a career. "I worked on an underground paper while I was in junior high school and it eventually spread to six other schools," she said. She explained that the productions class involves putting out a paper from start to finish. "We work on developing our writing skills and also learn a b o u t organizing a newspaper staff," she said. "This way we can see the entire process from beginning to end and are able to get a clear picture and idea of each of the functions involved." Most of the students in this semester's class indicated that they had a particular interest in printing. Their class work includes operating letterpress printing, and offset printing. Letterpress printing u s e d type on the press which has raised surfaces which print the letters. Off-set printing involves type which is photographed for metal plates that are placed in the press for production on paper. According to Hendricks the students have numerous printing projects that they work on such as programs for theater productions, note pads for school district, maps and student publications. Under the guidance of Spencer, the students are also reporters for the student newspaper. H i s journalism class also works on independent projects. "Although this is designed to be writing course the objective of the new program is oriented to develop students' interpersonal relationship skills," said Spencer.' He also said, "The class provides practice and learning of the English skills in a marnier that is appealing to students who may be turned off by the traditional English classes." This publishing productions class, combining both a writing course and print shop work is an attempt to teach not only the students but also the community what graphic arts can do. "We are teaching printing on a broader scale,1 emphasizing that it is a highly competitive field, that should interest a wide variety of students," said Hendricks. From the experience in the graphic classes in the high schools at least seven jobs have been offered to graduating seniors including girls in the printing fields. „