To Air Injunction In Court Tonight 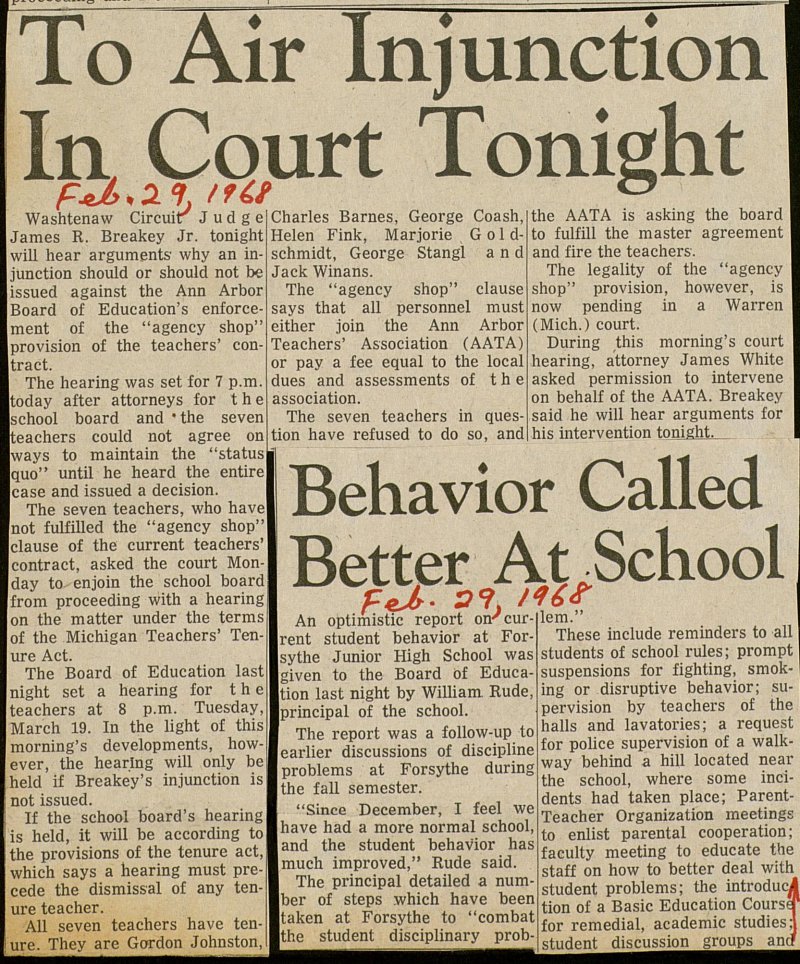 Washtenaw Circuir Judge James R. Breakey Jr. tonight will hear arguments why an injünction should or should not be issued against the Ann Arbor Board of Education's enforcement of the "agency shop" provisión of the teachers' contract. The hearing was set for 7 p.m. today after attorneys for the school board and 'the seven teachers could not agree on ways to maintain the "status quo" until he heard the entire case and issued a decisión. The seven teachers, who have not fulfilled the "agency shop" clause of the current teachers' contract, asked the court Monday to enjoin the school board from proceeding with a hearing on the matter under the terms of the Michigan Teachers' Tenure Act. The Board of Education last night set a hearing for the teachers at 8 p.m. Tuesday, March 19. In the light of this morning's developments, however, the hearing will only be held if Breakey's injunction is not issued. If the school board's hearing is held, it will be according to the provisions of the tenure act, which says a hearing must precede the dismissal of any tenure teacher. All seven teachers have tenure. They are Gordon Johnston, harles Barnes, George Coash, Helen Fink, Marjorie Goldchmidt, George Stangl and ack Winans. The "agency shop" clause ays that all personnel must ither join the Ann Arbor eachers' Association (AATA) r pay a fee equal to the local ues and assessments of the ssociation. The seven teachers in quesïon have refused to do so, and the AATA is asking the board to fulfill the master agreement and fire the teachers. The legality of the "agency shop" provisión, however, is now pending in a Warren (Mich.) court. During this morning's court hearing, attorney James White asked permission to intervene on behalf of the AATA. Breakey said he will hear arguments for his intervention tonight.