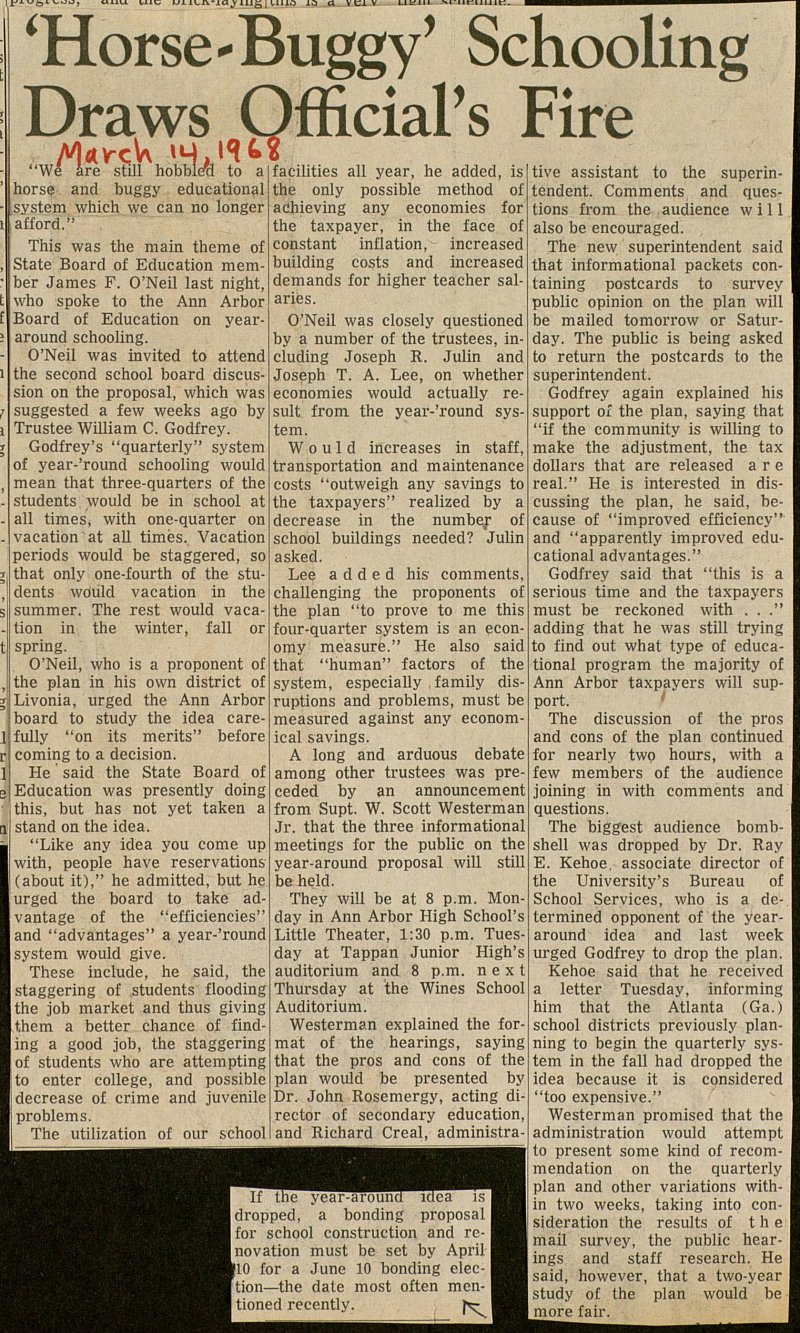 "We are stül hobblefd to a horse and buggy educational system which we can no longer afford." This was the main theme of State Board of Education member James F. O'Neil last night, who spoke to the Ann Arbor Board of Education on yeararound schooling. O'Neil was invited to attend the second school board discussion on the proposal, which was suggested a few weeks ago by Trustee William C. Godfrey. Godfrey's "quarterly" system of year-'round schooling would mean that three-quarters of the students would be in school at all times, with one-quarter on vacation "at all timés. Vacation periods would be staggered, so that only one-fourth of the students wduld vacation in the summer. The rest would vacation in the winter, f all or spring. O'Neil, who is a proponent of the plan in his own district of Livonia, urged the Ann Arbor board to study the idea carefully "on its merits" before coming to a decisión. He'said the State Board of Education was presently doing this, but has not yet taken a stand on the idea. "Like any idea you come up with, people have reservations (about it)," he admitted, but he urged the board to take advantage of the "efficiencies" and "advantages" a year-'round system would give. These include, he said, the staggering of students flooding the job market and thus giving them a better chance of finding a good job, the staggering of students who are attempting to enter college, and possible decrease of crime and juvenile problems. The utilization of our school facilities all year, he added, is the only possible method of achieving any economies for the taxpayer, in the face of constant inflation, increased building costs and increased demands for higher teacher salaries. O'Neil was closely questioned by a number of the trustees, including Joseph R. Julin and Joseph T. A. Lee, on whether economies would actually result from the 'round system. Would increases in staff, transportation and maintenance costs "outweigh any savings to the taxpayers" realized by a de ere a se in the number of school buildings needed? Julin asked. Lee added his comments, challenging the proponents of the plan "to prove to me this four-quarter system is an economy measuré." He also said that "human" factors of the system, especially . family disruptions and problems, must be measured against any economical savings. A long and arduous debate among other trustees was preceded by an announcement from Supt. W. Scott Westerman Jr. that the three informational meetings for the public on the year-around proposal will still be held. They will be at 8 p.m. Monday in Ann Arbor High School's Little Theater, 1:30 p.m. Tuesday at Tappan Junior High's auditorium and 8 p.m. n e x t Thursday at the Wines School Auditorium. Westerman explained the format of the hearings, saying that the pros and cons of the plan would be presented by Dr. John Rosemergy, acting director of secondary education, and Richard Creal, tive assistant to the superintendent. Comments and questions from the audience w i 1 1 also be encouraged. The new superintendent said that informational packets containing postcards to survey public opinión on the plan will be mailed tomorrow or Saturday. The public is being asked to return the postcards to the superintendent. Godfrey again explained his support of the plan, saying that "if the community is willing to make the adjustment, the tax dollars that are released are real." He is interested in discussing the plan, he said, because of "improved efficiency" and "apparently improved educational advantages." Godfrey said that "this is a serious time and the taxpayers must be reckoned with ..." adding that he was still trying to find out what type of educational program the majority of Ann Arbor taxpayers will support. The discussion of the pros and cons of the plan continued for nearly twp hours, with a few members of the audience joining in with comments and questions. The biggest audience bombshell was dropped by Dr. Ray E. Kehoe, associate director of the University's Bureau of School Services, who is a de-, termined opponent of the yeararound idea and last week urged Godfrey to drop the plan. Kehoe said that he receivcd a letter Tuesday, informing him that the Atlanta (Ga.) school districts previously planning to begin the quarterly system in the fall had dropped the idea because it is considered "too expensive." Westerman promised that the administration would attempt to present some kind of recommendation on the quarterly plan and other variations within two weeks, taking into consideration the results of the mail survey, the public hearings and staff research. He said, however, that a two-year study of the plan would be more fair. lf the year-around idea ís] dropped, a bonding proposal for school construction and reno vation must be set by April 110 for a June 10 bonding election- the date most often mentioned recently. fr '