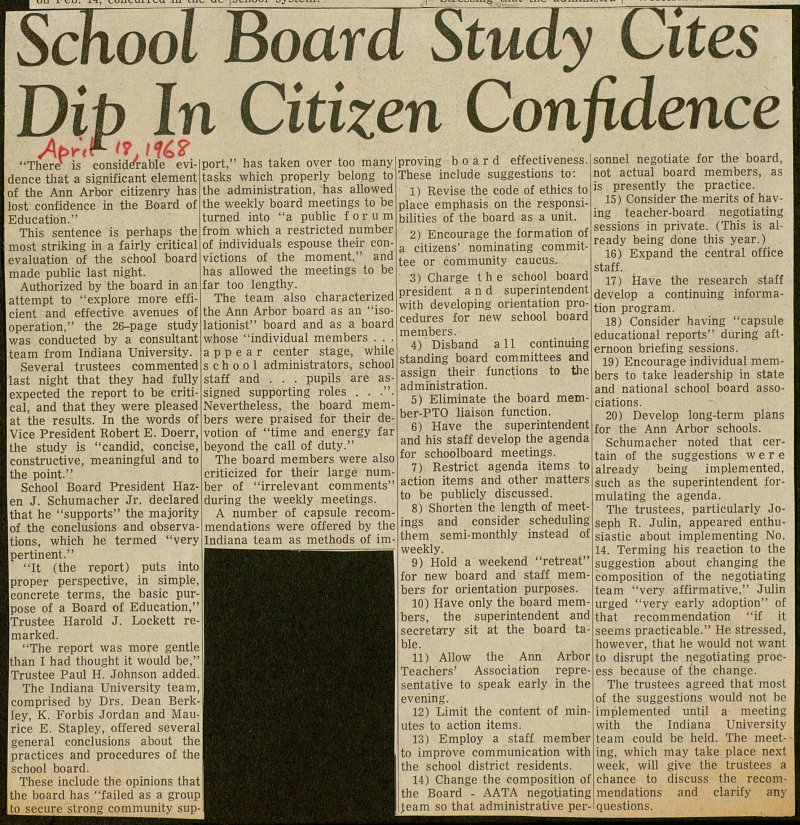 "There is considerable evidence that a significant element of the Ann Arbor citizenry has lost confidence in the Board of Education." This sentence is perhaps the most striking in a fairly critical evaluation of the school board made public last night. Authorized by the board in an attempt to "explore more efficiënt and effective avenues of operation," the 26-page study was conducted by a consultant team from Indiana University. Several trustees commented last night that they had fully expected the report to be critical, and that they were pleased at the results. In the words of Vice President Robert E. Doerr, the study is "candid, concise, constructive, meaningful and to the noint." School Board President Hazen J. Schumacher Jr. declared that he "supports" the majority of the conclusions and observations, which he termed "very pertinent." "It (the report) puts into proper perspective, in simple, concrete terms, the basic puripose of a Board of Education," Trustee Harold J. Lockett remarked. "The report was more gentle than I had thought it would be," Trustee Paul H. Johnson added. The Indiana University team, comprised by Drs. Dean Berkley, K. Forbis Jordán and Maurice E. Stapley, offered several general conclusions about the practices and procedures of the school board. These include the opinions that the board has "failed as a group to secure strong eommunity port," has taken over too many tasks which properly belong to the administration, has allowed the weekly board meetings to be turned into "a public forum frofn which a restricted number of individuals espouse their convictions of the moment," and has allowed the meetings to be far too lengthy. The team also characterized the Ann Arbor board as an "isolationist" board and as a board whose "individual members . . . a p p e a r center stage, while school administrators, school staff and . . . pupils are assigned supporting roles . . .". Nevertheless, the board members were praised for their áevotion of "time and energy far beyond the cali of duty." The board members were also criticized for their large number of "irrelevant comments" during the weekly meetings. A number of capsule recommendations were offered by the Indiana team as methods of proving board effectiveness. These include suggestions to: 1) Revise the code of ethics to place emphasis on the responsibilities of the board as a unit. 2) Encourage the formation of a citizens' nominating committee or community caucus. 3) Charge the school board president and superintendent with developing orientation procedures for new school board members. 4) Disband all continuing standing board committees and assign their functions to the admihistration. 5) Elimínate the board member-PTO liaison function. 6) Have the superintendent and his staff develop the agenda for schoolboard meetings. 7) Restrict agenda items to action items and other matters to be publicly discussed. 8) Shorten the length of meetings and consider scheduling them semi-monthly instead of weekly. 9) Hold a weekend "retreat" for new board and staff members for orientation purposes. 10) Have only the board members, the superintendent and secretary sit at the board table. 11) Allow the Ann Arbor Teachers' Association representative to speak early in the evening. 12) Limit the content of minutes to action items. 13) Employ a staff member to improve communication with the school district residents. 14) Change the composition of the Board - AATA negotiating j.eam so that administrative sonnel negotiate for the board, not actual board members, as is presently the practice. 15) Consider the merits of having teacher-board negotiating sessions in private. (This is already being done this year.) 16) Expand the central office staff. 17) Have the research staff develop a continuing information program. 18) Consider having "capsule educational reports" during afternoon briefing sessions. 19) Encourage individual members to take leadership in state and national school board associations. 20) Develop long-term plans for the Ann Arbor schools. Schumacher noted that certain of the suggestions w e r e already being implemented, such as the superintendent formulating the agenda. The trustees, particularly Joseph R. Julin, appeared enthusiastic about implementing No. 14. Terming his reaction to the suggestion about changing the composition of the negotiating team "very affirmative," Julin urged "very early adoption" of that recommendation "if it seems practicable." He stressed, however, that he would not want to disrupt the negotiating process because of the change. The trustees agreed that most of the suggestions would not be implemented until a meeting with the Indiana University team could be held. The ■ ing, which may take place next week, will give the trustees a chance to discuss the recommendations and clarify any questions.