Brief Items From School Board Meeting 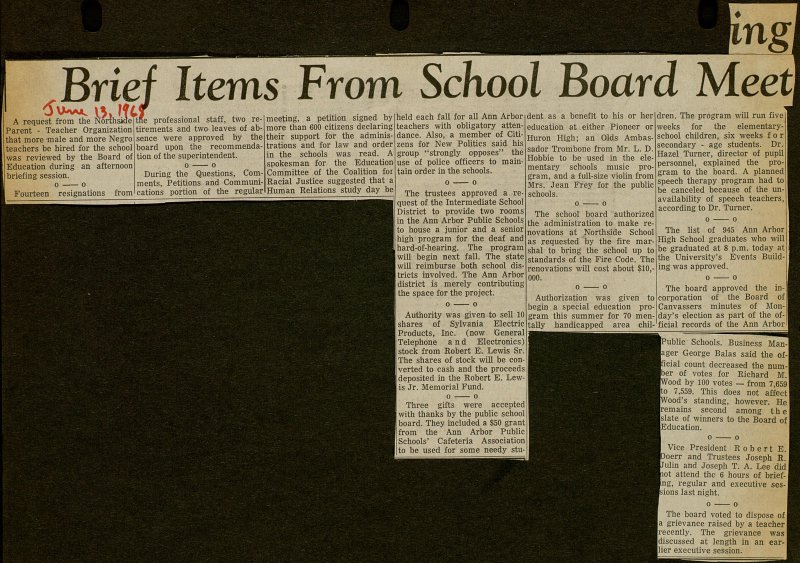 A request from the Ñorthside Parent - Teacher Organization that more male and more Negro teachers be hired for the school was reviewed by the Board of Education during an afternoon briefing session. o o Fourteen resignations from tne professional staff, two retirements and two leaves of absence were approved by the board upon the recommendation of the superintendent. o o During the Questions, Comments, Petitions and Communications portion of the regular meeting, a petition signed by more than 600 citizens declaring their support for the administrations and for law and order in the schools was read. A spokesman for the Education Committee of the Coalition for Racial Justice suggested that a Human Relations study day be held each fall for all Ann Arbor teachers with obligatory attendance. Also, a member of Citizens for New Politics said his group "strongly opposes" the use of pólice officers to maintain order in the schools, o o The trustees approved a request of the Intermedíate School District to provide two rooms in the Ann Arbor Public Schools to house a junior and a senior high program for the deaf and hard-of-hearing. The program will begin next fall. The state will reimburse both school districts involved. The Ann Arbor district is merely contributing the space for the project. o o Authority was given to sell 10 shares of Sylvania Electric Products, Inc. (now General Telephone and Electronics) stock from Robert E. Lewis Sr. The shares of stock will be converted to cash and the proceeds deposited in the Robert E. Lewis Jr. Memorial Fund. o o Three gifts were accepted with thanks by the public school board. They included a $50 grant from the Ann Arbor Public Schools' Cafetería Association to be used for some needy Jent as a benefit to his or her jducation at either Pioneer or Hurón High; an Olds Ambassador Trombone from Mr. L. D. EíO'bbie to be used in the elementary schools music program, and a full-size violin from Mrs. Jean Frey for the public schools. o o The school board authorized the administration to make retiovations at Northside School as requested by the f ire marshal to bring the school up to standards of the Fire Code. The renovations will cost about $10,000. o o Authorization was given to begin a special education program this summer for 70 mentally handicapped área dren. The program will run five weeks fo.r the elementaryschool children, six weeks f o r secondary - age students. Dr. Hazel Turner, director of pupil personnel, explained the program to the board. A planned speech therapy program had to be canceled because of the unavailability of speech teachers, according to Dr. Turner. o o The list of 945 Ann Arbor High School graduates who will be graduated at 8 p.m. today at the University's Events Building was approved. o o The board approved the incorporation of the Board of Canvassers minutes of Monday's election as part of the official records of the Ann Arbor Public Schools. Business Manager George Balas said the official count decreased the number of votes for Richard M. Wood by 100 votes - from 7,659 to 7,559. This does not affect Wood's standing, however. He remains second among the slate of winners to the Board of Education. o o Vice President Robert E. Doerr and Trustees Joseph R. Min and Joseph T. A. Lee did ïot attend the 6 hours of 1 ng, regular and executive sessions last night. The board voted to dispose of a grievance raised by a teacher recently. The grievance was discussed at length in an earlier executive session.