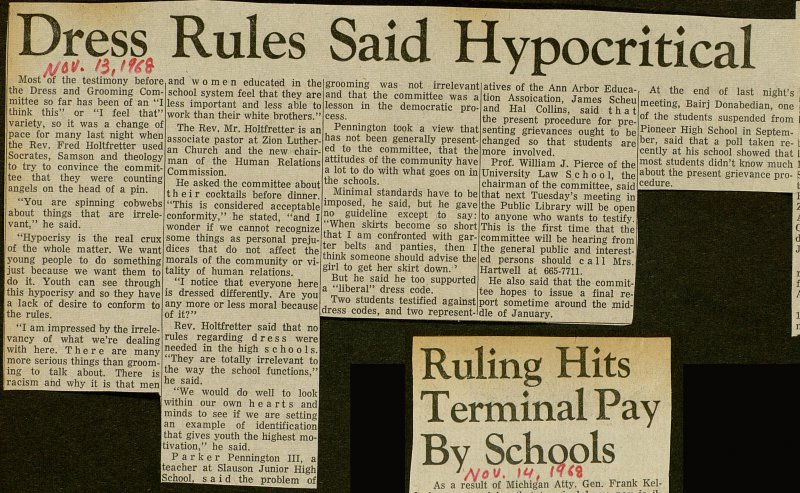 Most of the testimony before the Dress and Grooming Com mittee so f ar has been of an "I think this" or "I feel that' variety, so it was a change o: pace for many last night when the Rev. Fred Holtfretter used Sócrates, Samson and theology to try to convince the committee that they were counting angels on the head of a pin. "You are spinning cobwebs about things that are irrelevant," he said. "Hypocrisy is the real crux of the whole matter. We want young people to do something just because we want them to do it. Youth can see through this hypocrisy and so they have a lack of desire to conform to the rules. "I am impressed by the irrelevancy of what we're dealing with here. T h e r e are many more serious things than grooming to talk about. There is racism and why it is that men - - - - - and w o m e n educated in the school system feel that they are less important and less able to work than their white brothers.' The Rev. Mr. Holtfretter is an associate pastor at Zion Lutheran Church and the new chairman of the Human Relations Commission. He asked the committee about their cocktails before dinner. "This is considered acceptable conformity," he stated, "and I wonder if we cannot recognize some things as personal prejudices that do not affect the moráis of the community or vitality of human relations. "I notice that everyone here is dressed differently. Are you any more or less moral because of it?" Rev. Holtfretter said that no rules regarding dress were needed in the high schools. "They are totally irrelevant tol he way the school functions,"l ie said. "We would do well to lookl within our own hearts andj minds to see if we are setting] an example of identificationj that gives youth the highest mo-l tivation," he said. Parker Pennington III, al teacher at Slauson Junior Highl SchooLs a i d the problem ofl grooming was not irrelevan and that the committee was a lesson in the democratie pro cess. Pennington took a view that has not been generally presented to the committee, that the attitudes of the community have a lot to do with what goes on in the schools. Minimal standards have to be imposed, he said, but he gave no guideline except to say: "When skirts become so short ïhat I am confronted with gar;er belts and panties, then I ;hink someone should advise the girl to get her skirt down.' But he said he too supported a "liberal" dress code. Two students testified against iress codes, and two atives of the Ann Arbor Education Assoication, James Scheu and Hal Collins, said that the present procedure for presenting grievances ought to be changed so that students are more involved. Prof. William J. Pierce of the University Law School, the chairman of the committee, said that next Tuesday's meeting in the Public Library will be openj to anyone who wants to testify. This is the first time that the committee will be hearing from the general public and interested persons should cali Mrs Hartwell at 665-7711. He also said that the commit-J :ee hopes to issue a final re-I port sometime around the mid-l lle of January. At the end of last night's meeting, Bairj Donabedian, one of the students suspended from Pioneer High School in September, said that a poll taken recently at his school showed that most students didn't know much about the present grievance procedure.