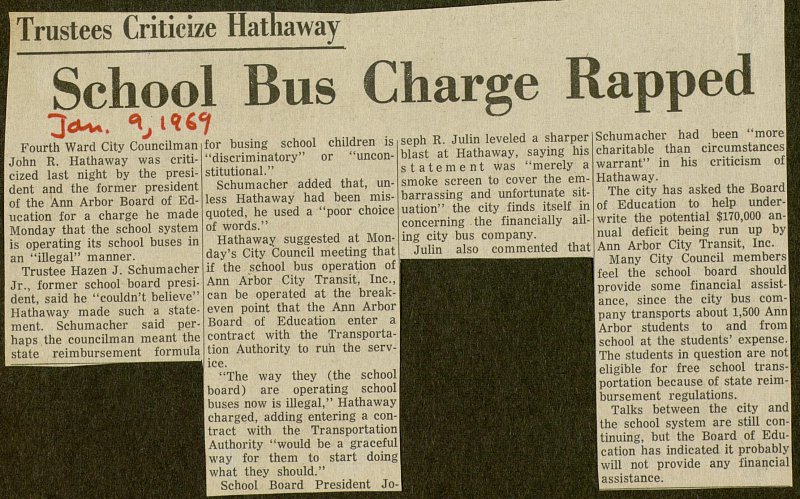 Fourth Ward City Councilman John R. Hathaway was criticized last night by the president and the former president of the Ánn Arbor Board of Education for a charge he made Monday that the school system is operating its school buses in an "illegal" manner. Trustee Hazen J. Schumacher Jr., former school board president, said he "couldn't believe" Hathaway made such a statement. Schumacher said perhaps the councilman meant the state reimbursement formula for busing school children is "discriminatory" or "unconstitutional." Schumacher added that, unless Hathaway had been misquoted, he used a "poor choice of words." Hathaway suggested at Monday's City Council meeting that if the school bus operation of Ann Arbor City Transit, Inc., can be operated at the breakeven point that the Ann Arbor Board of Education enter a contract with the Transportation Authority to run the service. "The way they (the school board) are operating school buses now is illegal," Hathaway charged, adding entering a contract with the Transportation i Authority "would be a graceful way for them to start doing what they should." School Board President seph R. Julin leveled a sharper blast at Hathaway, saying his statement was "merely a smoke screen to cover the embarrassing and unfortunate situation" the city finds itself in concerning the financially ailing city bus company. Julin also commented that Schumacher had been "morel charitable than circumstancesl warrant" in his criticism ofl Hathaway. The city has asked the Board of Education to help underwrite the potential $170,000 annual deficit being run up by Ann Arbor City Transit, Inc. Many City Council membersl feel the school board shouldl provide some financial assist-l anee, since the city bus com-l pany transports about 1,500 Ann Arbor students to and f rom school at the students' expense. The students in question are not eligible for free school transportation because of state reimbursement regulations. Talks between the city and the school system are still continuing, but the Board of Education has indicated it probably will not provide any financial assistance.