Report On Grooming Gets Friendly Board Reception 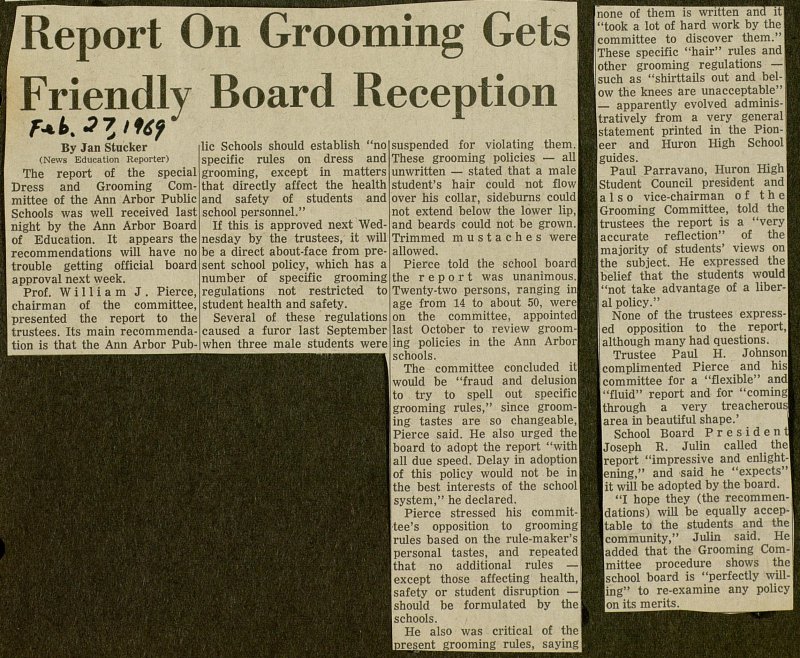 The report of the special Dress and Grooming Committee of the Ann Arbor Public Schools was well received last night by the Ann Arbor Board of Education. It appears the recommendations will have no trouble getting official board approval next week. Prof. W i 1 1 i a m J . Pierce, chairman of the committee, presented the report to the trustees. lts main recommendation is that the Ann Arbor lic Schools should establish "no specific rules on dress and grooming, except in matters that directly affect the health and safety of students and school personnel." If this is approved next Wednesday by the trustees, it will be a direct about-face from present school policy, which has a number of specific grooming regulations not restricted to student health and safety. Several of these regulations caused a furor last September when three male students were suspended for violating them.l These grooming policies - allí unwritten - stated that a male I student's hair could not flowl over his collar, sidebums couldl not extend below the lower lip, I and beards could not be grown.l Trimmed mustaches werel allowed. Pierce told the school boardl the report was unanimous.l Twenty-two persons, ranging inl age from 14 to about 50, werel on the committee, appointedl last October to review groom-l ing policies in the Ann Arborl schools. The committee concluded itl would be "fraud and delusionl to try to spell out specificl grooming rules," since grooming tastes are so changeable, Pierce said. He also urged the board to adopt the report "with all due speed. Delay in adoption of this policy would not be in the best interests of the school system," he declared. Pierce stressed his committee's opposition to grooming rules based on the rule-maker's personal tastes, and repeated that no additional rules - except those affecting health, safety or student disruption - should be formulated by the schools. He also was critical of the present grooming rules, saying none of them is written and ït "took a lot of hard work by the committee to discover them." These specific "hair" rules and other grooming regulations - such as "shirttails out and below the knees are unacceptable" - apparently evolved administratively from a very general statement printed in the Pioneer and Huron High School guides. Paul Parravano, Huron High Student Council president and a 1 s o vice-chairman of the Grooming Committee, told the trustees the report is a "very accurate reflection" of the majority of students' views on the subject. He expressed the belief that the students would "not take advantage of a liberal policy." None of the trustees express-l ed opposition to the report,! although many had questions. Trustee Paul H. Johnson! complimented Pierce and hisl committee for a "flexible" andl "fluid" report and for "comingl through a very treacherousl areainbeautifulshape.' I School Board Presidentl Joseph R. Julin called the! report "impressive and enlight- ening," and said he "expects"! it will be adopted by the board. "I hope they (the recommendations) will be equally acceptable to the students and the Icommunity," Julin said. He ladded that the Grooming ComImittee procedure shows the Ischool board is "perfectly willling" to re-examine any policy Ion its merits.