Board Of Education Supports Teachers On Picketing Issue 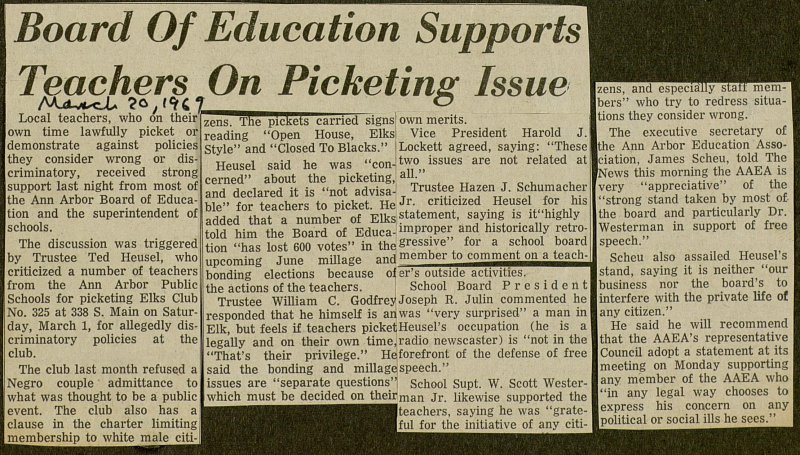 Local teachers, who on their own time lawfully picket or demónstrate against policies they consider wrong or discriminatory, received strong support last night from most of the Ann Arbor Board of Education and the superintendent of schools. The discussion was triggered by Trustee Ted Heusel, who criticized a number of teachers from the Ann Arbor Public Schools for picketing Elks Club No. 325 at 338 S. Main on Saturday, Maren 1, for allegedly discriminatory policies at the club. The club last month refused a Negro couple admittance to what was thought to be a public event. The club also has a clause in the charter limiting membership to white male citi- - - - - zens. The pickets carnea signs reading "Open House, Elks Style" and "Closed To Blacks." Heusel said he was "concerned" about the picketing, and declared it is "not advisable" for teachers to picket. He added that a number of Elks told him the Board of Education "has lost 600 votes" in the upcoming June millage and bonding elections because of the actions of the teachers. Trustee William C. Godfrey responded that he himself is an Elk, but feels if teachers picket legally and on their own time, "That's their privilege." He said the bonding and millage issues are "separate questions" which must be decided on their own merits. Vice President Harold J. Lockett agreed, saying: "These two issues are not related at all." Trustee Hazen J. Schumacher Jr. criticized Heusel for his statement, saying is if'highly improper and historically retrogressive" for a school board member to commenonajeach er's outside activities. School Board President Joseph R. Julin commented he was "very surprised" a man in Heusel's occupation (he is a radio newscaster) is "not in the forefront of the defense of free speech." School Supt. W. Scott Westerman Jr. likewise supported the teachers, saying he was "grateful for the initiative of any zens, and especiálly staif 1 bers" who try to redress situa;ions they consider wrong. The exeeutive secretary of the Ann Arbor Education Association, James Scheu, told The News this morning the AAEA is very "appreciative" of the 'strong stand taken by most ofthe board and particularly Dr. Westerman in support of free speech." Scheu also assailed Heusel's stand, saying it is neither "our business nor the board's to interfere with the private life of any citizen." He said he will recommend that the AAEA's representative Council adopt a statement at its meeting on Monday supporting any member of the AAEA who "in any legal way chooses to express his concern on any political or social ills he sees."