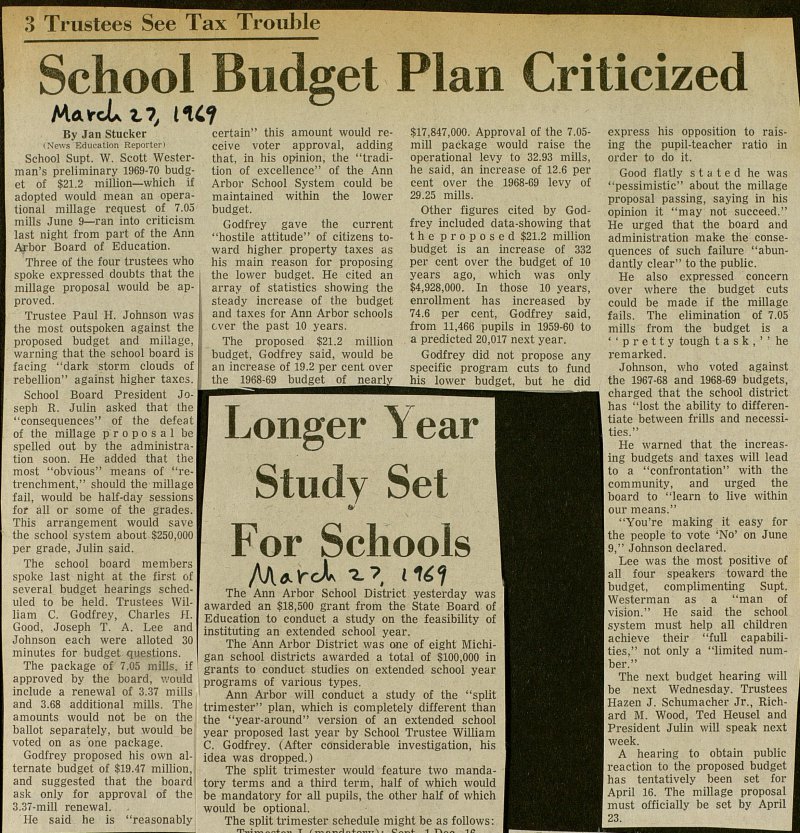 School Supt. W. Scott Westerman's preliminary 1969-70 budget of $21.2 million- which if adopted would mean an operational millage request of 7.05 milis June 9- ran into criticism last night from part of the Ann Arbor Board of Education. Three of the four trustees who spoke expressed doubts that the millage proposal would be approved. Trustee Paul H. Johnson was the most outspoken against the proposed budget and miilage, warning that the school board is facing "dark storm clouds of rebellion" against higher taxes. School Board President Joseph R. Julin asked that the "consequences" of the defeat of the millage proposal be spelled out by the administration soon. He added that the most "obvious" means of "retrenchment," should the millage fail, would be half-day sessions for all or some of the grades. This arrangement would save the school system about $250,000 per grade, Julin said. The school board members spoke last night at the first of several budget hearings scheduled to be held. Trustees William C. Godfrey, Charles H. Good, Joseph T. A. Lee and Johnson each were alloted 30 minutes for budget questions. The package of 7.05 milis, if approved by the board, v.'ould include a renewal of 3.37 milis and 3.68 additional milis. The amounts would not be on the ballot separately, but would be voted on as 'one package. Godfrey proposed his own altérnate budget of $19.47 million, and suggested that the board ask only for approval of the 3.37-mill renewal. He said he is "reasonably certain" this amount would receive voter approval, adding that, in his opinión, the "tradition of excellence" of the Ann Arbor School System could be maintained within the lower budget. Godfrey gave the current "hostile attitude" of citizens toward higher property taxes as his main reason for proposing the lower budget. He cited an array of statistics showing the steady increase of the budget and taxes for Ann Arbor schools ever the past 10 years. The proposed $21.2 million budget, Godfrey said, would be an increase of 19.2 per cent over the 1968-69 budget of nearly $17,847,000. Approval of the 7.05mill package would raise the operaiional levy to 32.93 milis, he said, an increase of 12.6 per cent over the 1968-69 levy of 29.25 milis. Other figures cited by Godfrey included data-showing that the proposed $21.2 million budget is an increase of 332 per cent over the budget of 10 years ago, which was only $4,928,000. In those 10 years, enrollment has increased by 74.6 per cent, Godfrey said, from 11,466 pupils in 1959-60 to a predicted 20,017 next year. Godfrey did not propose any specific program cuts to fund hls lower budget, but he did express his opposition to raising the pupil-teacher ratio in order to do it. Good flatly s t a t e d he was "pessimistic" about the millage proposal passing, saying in his opinión it "may not succeed." He urged that the board and administration make the consequences of such failure "abundantly clear" to the public. He also expressed concern over where the budget cuts could be made if the millage fails. The elimination of 7.05 milis from the budget is a ' ' p r e 1 1 y tough t a s k , ' ' he remarked. Johnson, who voted against the 1967-68 and 1968-69 budgets, charged that the school district has "lost the ability to differentiate between frills and necessities." He warned that the increasing budgets and taxes will lead to a "confrontation" with the community, and urged the board to "learn to live within our means." "You're making it easy for the people to vote 'No' on June 9," Johnson declared. ] Lee was the most positive of all four speakers toward the budget, complimenting Supt. Westerman as a "man of visión." He said the school system must help all children achieve their "full capabilities," not only a "limited number." The next budget hearing will be next Wednesday. Trustees Hazen J. Schumacher Jr., Richard M. Wood, Ted Heusel and President Julin will speak next week. A hearing to obtain public reaction to the proposed budget has tentatively been set for April 16. The millage proposal must officially be set by April 23.