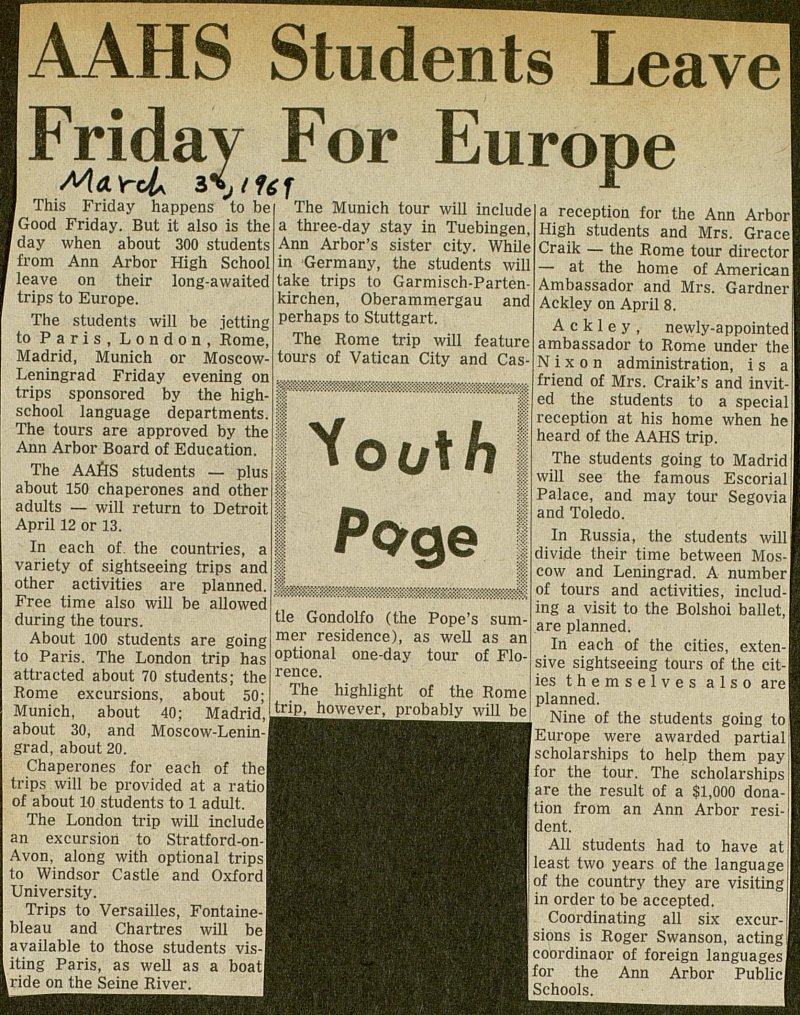 I This Friday happens to be iGood Friday. But it also is the fday when about 300 students from Ann Arbor High School leave on their long-awaited trips to Europe. The students will be jetting to Paris, London, Rome, Madrid, Munich or MoscowLeningrad Friday evening on trips sponsored by the highschool language departments. The tours are approved by the Ann Arbor Board of Education. The AAHS students - plus about 150 chaperones and other adults - will return to Detroit April 12 or 13. In each of. the countries, a variety of sightseeing trips and other activities are planned. Free time also will be allowed during the tours. About 100 students are going to Paris. The London trip has attracted about 70 students; the Rome excursions, about 50; Munich, about 40; Madrid, about 30, and Moscow-Lenin-I grad, about 20. Chaperones for each of thel trips will be provided at a ratio I of about 10 students to 1 adult. The London trip will includel an excursión to Stratford-on-l Avon, along with optional tripsl to Windsor Castle and Oxford I University. Trips to Versailles, Fontaine-I bleau and Chartres will bel available to those students vis-I iting Paris, as well as a boatj ride on the Seine River. I The Munich tour will include a three-day stay in Tuebingen, Ann Arbor's sister city. Whüe in Germany, the students wil] take trips to Garmisch-Partenkirchen, Oberammergau and perhaps to Stuttgart. The Rome trip will feature tours of Vatican City and tle Gondolfo (the Pope's summer residence), as well as an optional one-day tour of Florence. The highlight of the Rome trip, however, probably will be a reception for the Ann Arbor High students and Mrs. Grace Craik - the Rome tour director - at the home of American Ambassador and Mrs. Gardner Ackley on April 8. A c k 1 e y , newly-appointed ambassador to Rome under the N i x o n administration, isa friend of Mrs. Craik's and invited the students to a special reception at his home when he heard of the AAHS trip. The students going to Madrid will see the famous Escorial Palace, and may tour Segovia and Toledo. In Russia, the students will divide their time between Moscow and Leningrad. A number of tours and activities, including a visit to the Bolshoi ballet, are planned. In each of the cities, extensive sightseeing tours of the cities themselves also are planned. Nine of the students going to! Europe were awarded partial scholarships to help them pay for the tour. The scholarships are the result of a $1,000 donation f rom an Ann Arbor resident. All students had to have at least two years of the languagej of the country they are visiting in order to be accepted. Coordinating all six excursions is Roger Swanson, actingj coordinaor of foreign languagesj for the Ann Arbor Publicl Schools. I p$e I MmmmmrnmmmmmmmmwmM