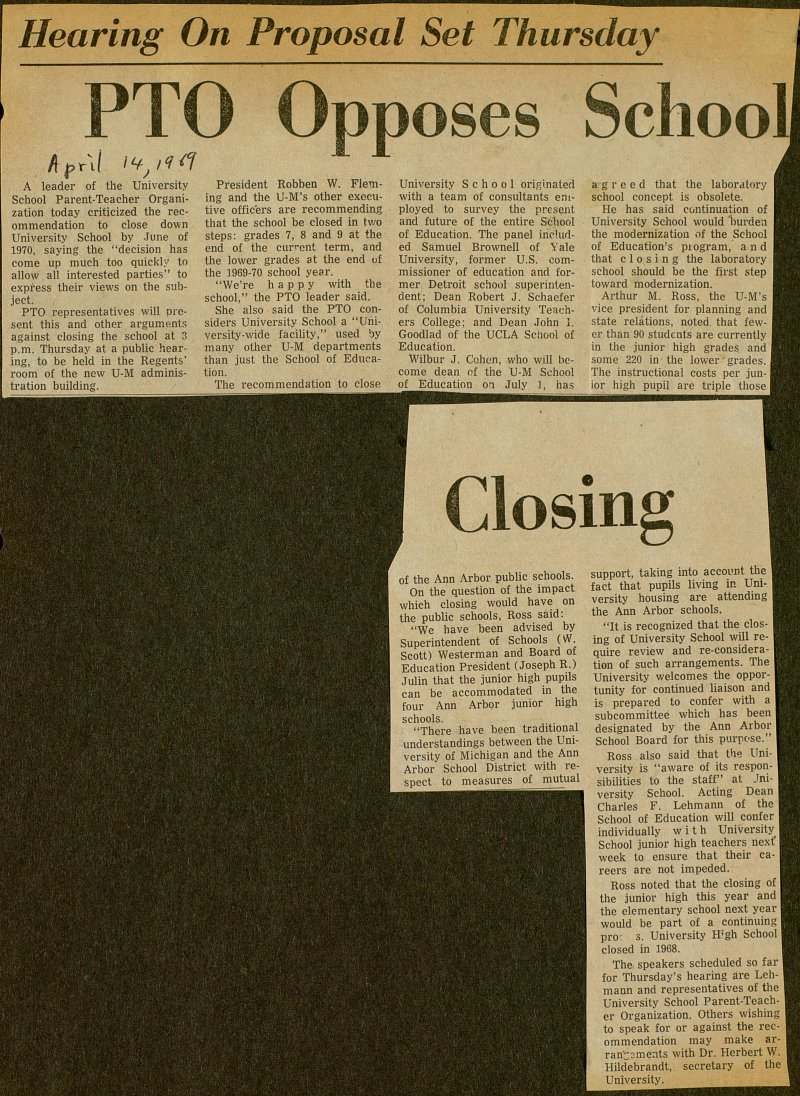 A leader of the University School Parent-Teacher Organization today criticized the recommendation to close down University School by June of 1970, saying the "decisión has come up much too quickly to allow all interested parties" to express their views on the subject. PTO representatives will present this and other arguments against closing the school at 3 p.m. Thursday at a public hearing, to be held in the Regents' room of the new U-M administration building. President Robben W. Fleming and the U-M's other executive offic'ers are recommending that the school be closed in tvo steps: grades 7, 8 and 9 at the end of the current term, and the lower grades at the end uf the 1969-70 school year. "We're happy with the school," the PTO leader said. She also said the PTO considers University School a "University-wide facility," used by many other U-M departments than just the School of Eduoation. The recommendation to close University School orip.inated with a team of consultants eniployed to survey the present and future of the entire School of Education. The panel included Samuel Brownell of Y ale University, former U.S. oommissioner of education and former Detroit school superintendent; Dean Robert J. Schaefer of Columbia University Teachers College; and Dean John I. Goodlad of the UCLA School of Education. Wilbur ,T. Cohen, who will become dean of the U-M School of Education on July ], has a g r e e d that the laboratory school concept is obsolete. He has said continuation of University School would "bul-den the modernization of the School of Education's program, and that c 1 o s i n g the laboratory school should be the first step toward modernization. Arthur M. Ross, the U-M's vice president for planning and state relations, noted that fewer than 90 students are currently in the junior high grades and some 220 in the lower grades. The instructional costs per junior high pupil are triple those of the Ann Arbor public schools. On the question of the impact which closing would have on the public schools, Ross said: "We have been advised by Superintendent of Schools (W. Scott) Westerman and Board of Education President (Joseph R.) Julin that the junior high pupils can be accommodated in the four Ann Arbor junior high schools. "There have been traditional understandings between the University of Michigan and the Ann Arbor School District with respect to measures of mutual support, taking into account the 1 fact that pupils living ir. I versity housing are attending I the Ann Arbor schools. "It is recognized that the I ing of University School will I quire review and I tion of such arrangements. The University welcomes the opportunity for continued liaison and is prepared to confer with a subcommittee which has been designated by the Ann Arbor School Board for this purpese." Ross also said that the University is "aware of its responsibilities to the staf f" at Jniversity School. Acting Dean Charles F. Lehmann of the I School of Education will confer I individually with University School junior high teachers next I week lo ensure that their 1 reers are not impeded. i Ross noted that the closing of I the junior high this year and I the elementary school next year I would be part of a continuing I pro: s. University ffigh School I closed in 1968. The speakers scheduled so far for Thursday's hearing are Lehmann and representatives of the ] University School Parent-Teacher Organization. Others wishing to speak for or against the recommendation may make arran'ments with Dr. Herbert W. Hildebrandt, secretary of the University .