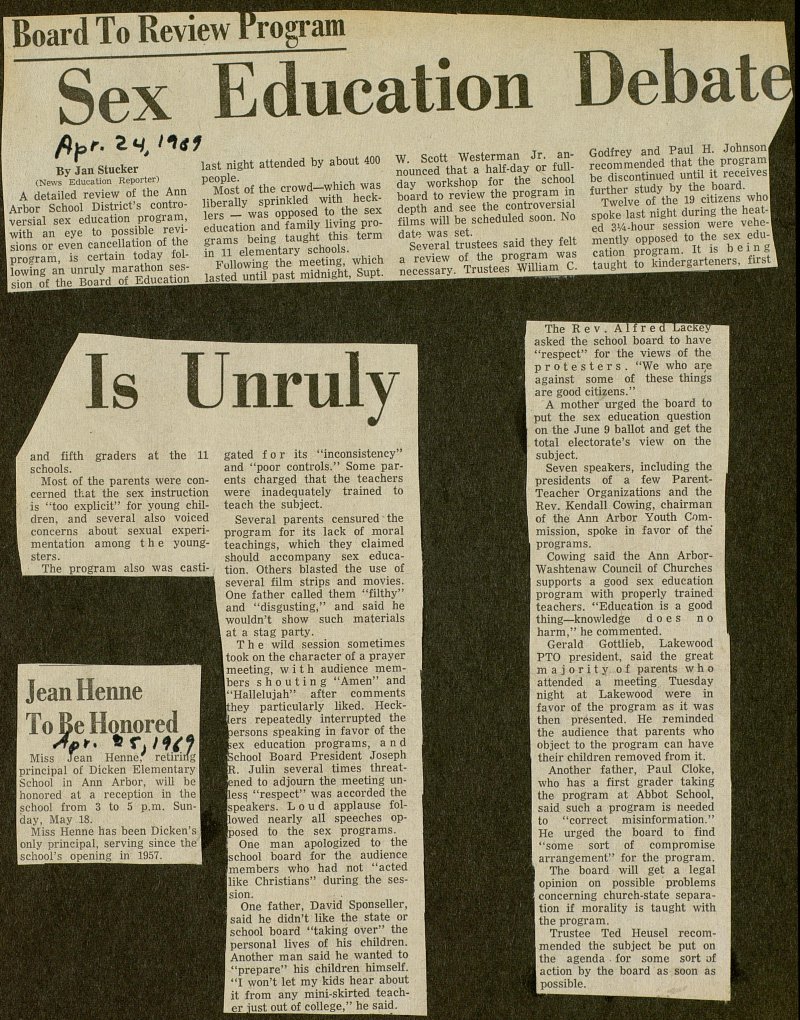 A detailed review of the Arm Arbor School District' s controversial sex education program, with an eye to possible revisions or even cancellation of the program, is certain today following an unruly marathon session of the Board of Education, last night attended by about 400 people. , . , Most of the crowd- which was liberally sprinkled with hecklers was opposed to the sex education and family living programs being taught this term in 11 elementary schools. Fullowing the meeting, whicn lasted until past midnight, Supt. W Scott Westerman Jr. announced that a half-day or fullday workshop for the school board to review the program m depth and see the controversial films will be scheduled soon. No date was set. Several trustees said they feit a review of the program was necessary. Trustees William C_ Godfrey and Paul H. JohnsonJ recommended that the program! be discontinued until it receivesl further study by the board. Twelve of the 19 citizens whol spoke last night during the heat-l ed 3V4-hour session were vene-l mently opposed to the sex edu-j catión program. It is being taught to kindergarteners, and fifth graders at the 11 schools. Most of the parents were concerned that the sex instruction is "too explicit" for young children, and several also voiced concerns about sexual experimentation among the youngsters. The program also was gated f o r its "inconsistency" and "poor controls." Some parents charged that the teachers were inadequately trained to teach the subject. Several parents censured the program for its lack of moral teachings, which they claimed should accompany sex education. Others blasted the use of several film strips and movies. One father called them "filthy" and "disgusting," and said he wouldn't show such materials i at a stag party. The wild session sometimes took on the character of a prayer meeting, w i t h audience members shouting "Amen" and "Hallelujah" after comments they particularly h'ked. Hecklers repeatedly interrupted the kersons speaking in favor of the fcex education programs, and School Board President Joseph K. Julin several times threatfened to adjourn the meeting unQess "respect" was accorded the Speakers. L o u d applause folQowed nearly all speeches opposed to the sex programs. One man apologized to the school board for the audience members who had not "acted like Christians" during the session. One father, David Sponseller, said he didn't like the state or school board "taking over" the personal lives of his children. Another man said he wanted to "prepare" his children himself. "I won't let my kids hear about it from any mini-skirted teacher iust out of college," he said. The Rev. Alfred Lackej' asked the school board to have "respect" for the views of the protesters. "We who are against some of these things are good citizens." A mother urged the board to put the sex education question on the June 9 ballot and get the total electorate's view on the subject. Seven speakers, ïncludmg the presidents of a few ParentTeacher Organizations and the Rev. Kendall Cowing, chairman of the Ann Arbor Youth Commission, spoke in favor of the' programs. Cowing said the Ann ArborWashtenaw Council of Churches supports a good sex education program with properly trained teachers. "Education is a good thing- knowledge does n o harm," he commented. Gerald Gottlieb, Lakewood PTO president, said the great majority of parents w h o attended a meeting Tuesday night at Lakewood were in favor of the program as it was then prèsented. He reminded the audience that parents who object to the program can have their children removed from it. Another father, Paul Cloke, who has a first grader taking the program at Abbot School, said such a program is needed to "correct misinformation." He urged the board to find "some sort of compromise arrangement" for the program. The board will get a legal opinión on possible problems concerning church-state separation if morality is taught with the program. Trustee Ted Heusel recommended the subject be put on the agenda for some sort of action by the board as soon as possible.