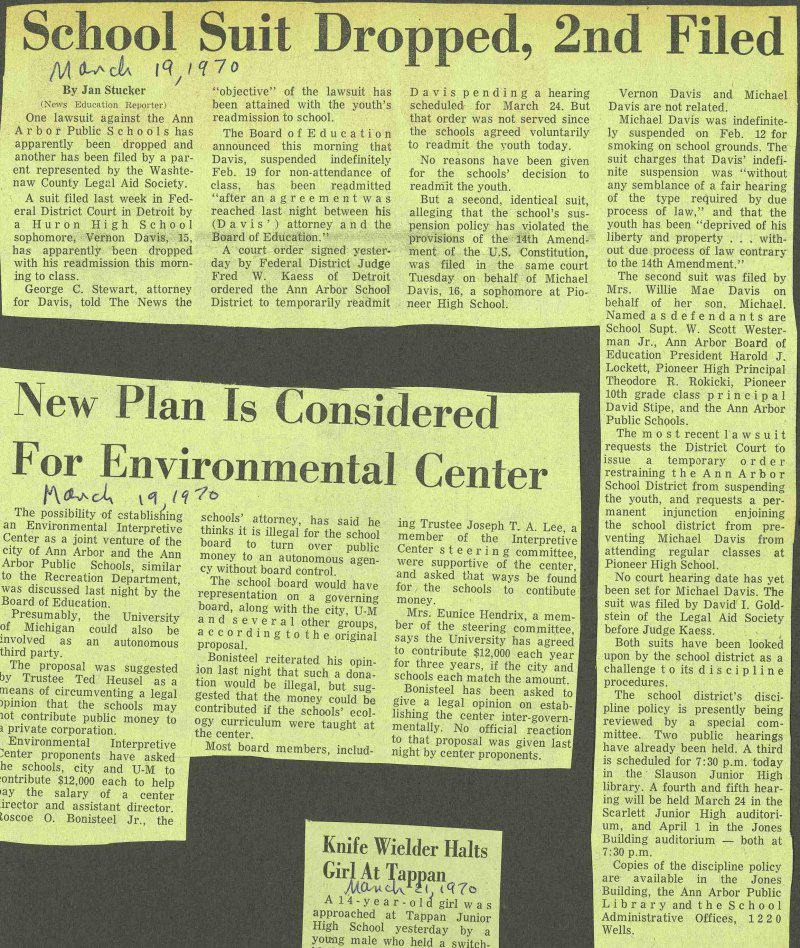 One lawsuit against the Ann Arbor Public Schools has apparently been dropped and another has been filed by a parent represented by the Washtenaw County Legal Aid Society. A suit filed last week in Federal District Court in Detroit by a Hurón High School sophomore, Vernon Davis, 15, has apparently been dropped with his readmission this morning to class. George C. Stewart, attorney for Davis, told The News the "objective" of the lawsuit has been attained with the youth's readmission to school. The Board of Education announced this morning that Davis, suspended indefinitely Feb. 19 for non-attendance of class, has been readmitted "after an agreement was reached last night between his (Davis') attorney and the Board of Education." A court order signed yesterday by Federal District Judge Fred W. Kaess of Detroit ordered the Ann Arbor School District to temporarily readmit Davis pending a hearing scheduled for March 24. But that order was not served since the schools agreed voluntarily to readmit the youth today. No reasons have been given for the schools' decisión to readmit the youth. But a seeond, identical suit, alleging that the school's suspension policy has violated the provisions of the 14th Amendment of the U.S. Constitution, was filed in the same court Tuesday on behalf of Michael Davis, 16, a sophomore at Pioneer High School. Vernon Davis and Michael Davis are not related. Michael Davis was indefinitely suspended on Feb. 12 for smoking on school grounds. The suit charges that Davis' indefinite suspension was "without any semblance of a fair hearing of the type required by due process of law," and that the youth has been "deprived of his liberty and property . . . without due .process of law contrary to the 14th Amendment." The second suit was filed by Mrs. Willie Mae Davis on behalf of her son, Michael. Named asdefendants are School Supt. W. Scott Westerman Jr., Ann Arbor Board of Education President Harold J. Lockett, Pioneer High Principal Theodore R. Rokicki, Pioneer lOth grade class principal David Stipe, and the Ann Arbor Public Schools. The most recent lawsuit requests the District Court tb issue a temporary order restraining the Ann Arbor School District from suspending the youth, and requests a permanent injunction enjoining the school district from preventing Michael Davis from attending regular classes at Pioneer High School. No court hearing date has yet been set for Michael Davis. The suit was filed by David I. Goldstein of the Legal Aid Society bef ore Judge Kaess. Both suits have been looked upon by the school district as a challenge toits discipline procedures. The school distriet's I pline policy is presently being I reviewed by a special I mittee. Two public hearings I have already been held. A third is scheduled for 7:30 p.m. today in the Slauson Junior High library. A fourth and fifth I ing will be held March 24 in the I Scarlett Junior High I urn, and April 1 in the Jones I Building auditorium - both at 1 7:30 p.m. Copies of the discipline policy , are available in the Jones Building, the Ann Arbor Public I Library and the School I Administrative Offices, 12 2 0 I Wells.