School Assault Reports Are Given To Trustees 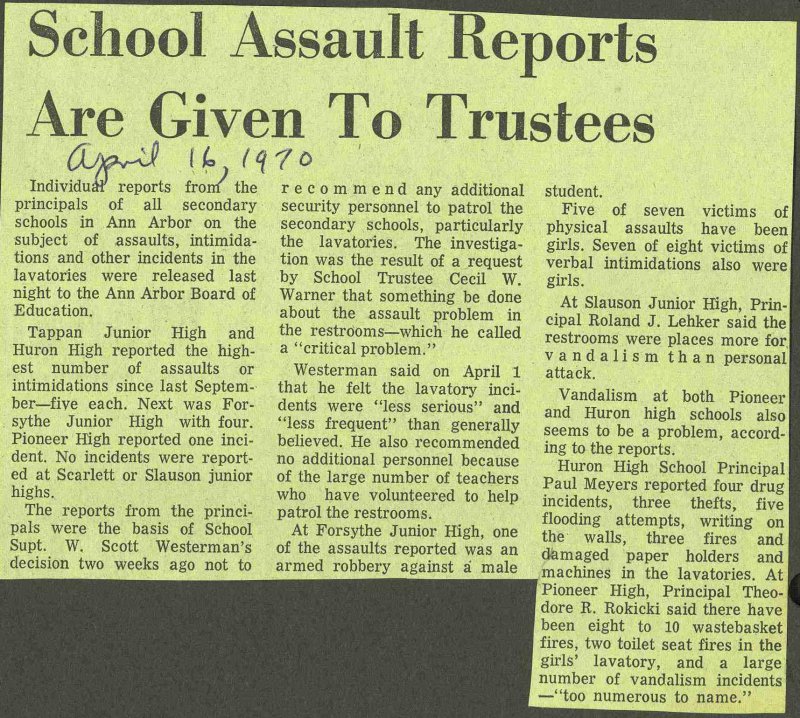 Individuar reports frorn the principáis of all secondary schools in Ann Arbor on the subject of assaults, intimidations and other incidents in the lavatories were released last night to the Ann Arbor Board of Education. Tappan Junior High and Huron High reported the highest number of assaults or inthnidations since last September- five each. Next was Forsythe Junior High with four. Pioneer High reported one incident. No incidents were reported at Searlett or Slauson junior highs. The reports from the principáis were the basis of School Supt. W. Scott Westerman's decisión two weeks ago not to reeommend any additional security personnel to patrol the secondary schools, particularly the lavatories. The investigation was the result of a request by School Trustee Cecil W. Warner that something be done about the assault problem in the restrooms- which he called a "critical problem." Westerman said on April 1 that he feit the lavatory incidents were "less serious" and "less frequent" than generally believed. He also recommended no additional personnel because of the large number of teachers who have volunteered to help patrol the restrooms. At Forsythe Junior High, one of the assaults reported was an armed robbery against á male student. Five of seven victims of physical assaults have been girls. Seven of eight victims of verbal intimidations also were girls. At Slauson Junior High, Prin-I cipal Roland J. Lehker said the restrooms were places more for, vandalism than personal attack. Vandalism at both Pioneer and Huron high schools also seems to be a problem, aecording to the reports. Huron High School Principal Paul Meyers reported four drug incidents, three thefts, five flooding attempts, writing on the walls, three fires and dëmaged paper holders and machines in the lavatories. At [Pioneer High, Principal Theodore R. Rokicki said there have I been eight to 10 wastebasket fires, two toilet seat fires in the I girls' lavatory, and a largel number of vandalism incidents I - "too numerous to name." I