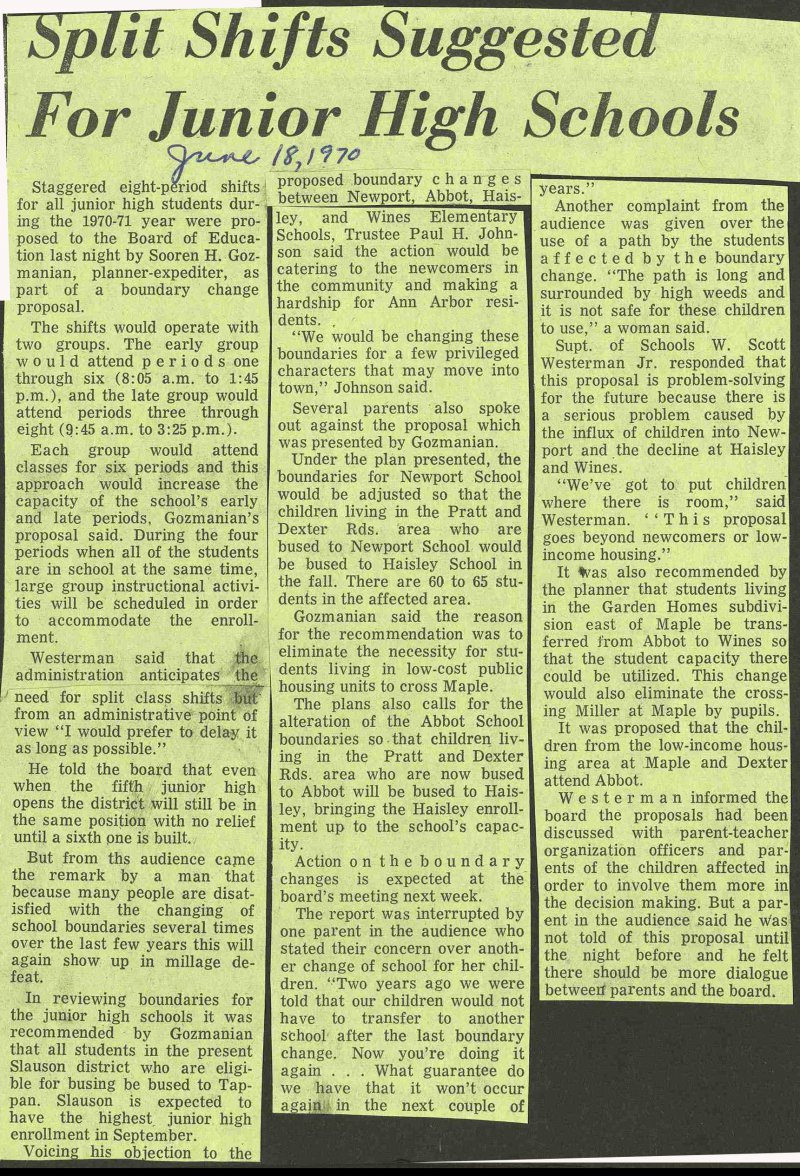 Staggered eight-përiod shifts for all junior high students during the 1970-71 year were proposed to the Board of Education last night by Sooren H. Gozmanian, planner-expediter, as part of a boundary change proposal. The shifts would opérate with two groups. The early group would attend p e r i o d s one through six (8:05 a.m. to 1:45 p.m.), and the late group would attend periods three through eight (9:45 a.m. to 3:25 p.m.). Each group would attend classes for six periods and this approach would increase the capacity of the school's early and late periods, Gozmanian's proposal said. During the four periods when all of the students are in school at the same time, large group instructional activities will be scheduled in order to accommodate the enrollment. Westerman said that the administration anticipates the - .- -g need for split class shifts bm' from an administrative point of view "I would prefer to delay it as long as possible." He told the board that even when the fifth junior high opens the district will still be in the same position with no relief until a sixth pne is built. But from ths audience came the remark by a man that because many people are disatisfied with the changing of school boundaries several times over the last few years this will again show up in millage defeat. In reviewing boundaries for the junior high schools it was recommended by Gozmanian that all students in the present Slauson district who are eligirle for busing be bused to Tappan. Slauson is expected to have the highest. junior high enrollment in September. Voicmg_his_g_bjection to the I proposed boundary changes between Newport, Abbot, Haisley, and Wines Elementary Schools, Trustee Paul H. Johnson said the action would be catering to the newcomers in the community and making a hardship for Ann Arbor residen ts. , "We would be changing these boundaries for a few privileged characters that may move into town," Johnson said. Several parents also spoke out against the proposal which was presented by Gozmanian. Under the plan presented, the boundaries for Newport School would be adjusted so that the children living in the Pratt and Dexter Rds. area who are bused to Newport School would be bused to Haisley School in the fall. There are 60 to 65 students in the affected area. Gozmanian said the reason for the recommendation was to eliminate the necessity for students living in low-cost public housing units to cross Maple. The plans also calis for the alteration of the Abbot School boundaries so that children living in the Pratt and Dexter Rds. area who are now bused to Abbot will be bused to Haisley, bringing the Haisley enrollment up to the school's capacity. Action on the boundary changes is expected at the board's meeting next week. The report was interrupted by one parent in the audience who stated their concern over another change of school for her children. "Two years ago we were told that our children would not have to transfer to another school after the last boundary change. Now you're doing it again . . . What guarantee do we have that it won't occur agaitvin the next couple of years." Another complaint from the audience was given over the use of a path by the students affected by the boundary change. "The path is long and surrounded by high weeds and it is not safe for these children to use," a woman said. Supt. of Schools W. Scott Westerman Jr. responded that this proposal is problem-solving for the future because there is a serious problem caused by the influx of children into Newport and the decline at Haisley and Wines. "We've got to put children where there is room," said Westerman. ''This proposal goes beyond newcomers or lowincome housing." It %as also recommended by the planner that students living in the Garden Homes subdivisión east of Maple be transferred i'rom Abbot to Wines so that the student capacity there could be utilized. This change would also elimínate the crossing Miller at Maple by pupils. It was proposed that the children from the low-income housing area at Maple and Dexter attend Abbot. Westerman informed the board the propos als had been discussed with parent-teacher organization officers and par-i ents of the children affected in order to involve them more in the decisión making. But a par-J ent in the audience said he was not told of this proposal until the night before and he feit there should be more dialogue betweerï parents and the board.