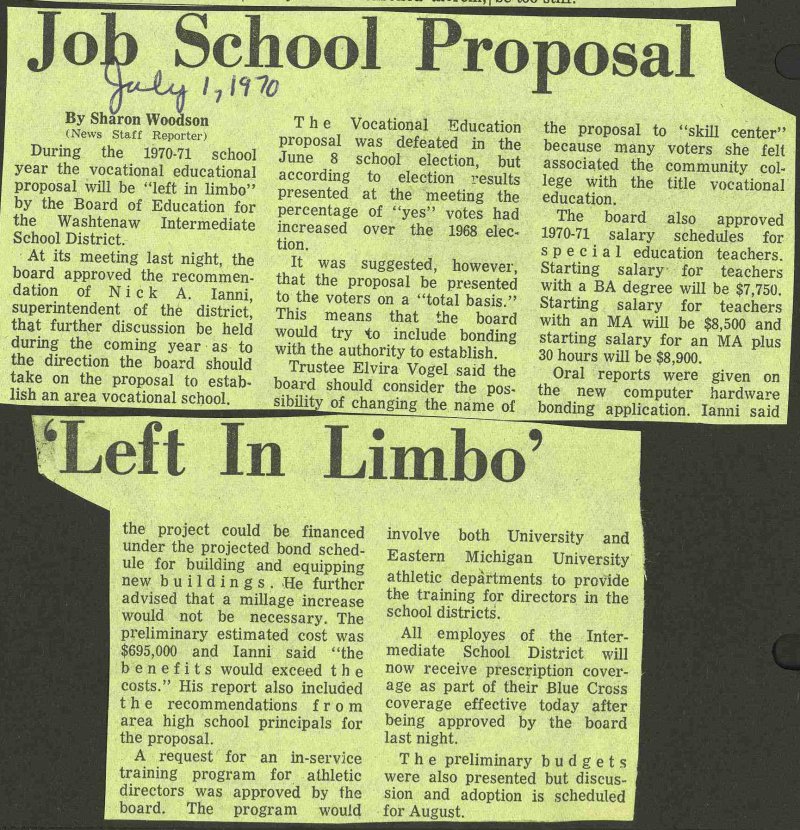 During the 1970-71 school year the vocational educational proposal will be "left in limbo" by the Board of Education for the Washtenaw Intermedíate School District. At its meeting last night, the board approved the recommendation of Nick A. Ianni, superintendent of the district, that further discussion be held during the coming year as to the direction the board should take on the proposal to establish an area vocational school. The Vocational Education proposal was defeated in the June 8 school election, but according to election results presented at the meeting the percentage of "yes" votes had increased over the 1968 election. It was suggested, however, that the proposal be presented to the voters on a "total basis." This means that the board would try to include bonding with the authority to establish. Trustee Elvira Vogel said the board should consider the possibility of changüí g the name of the proposal to "skill center" because many voters she feit associated the community college with the title vocational education. The board also approved 1970-71 salary sehedules for special education teachers. Starting salary for teachers with a BA degree will be $7,750. Starting salary for teachers with an MA will be $8,500 and starting salary for an MA plus 30 hours will be $8,900. Oral reports were given on the new computer hardware bonding application. Ianni said I the project could be finan eed under the projected bond schedule for building and equipping new buildings. .He further advised that a millage increase would not be necessary. The preliminary estimated cost was $695,000 and Ianni said "the b e n e f i t s would exceed the costs." His report also included the recommendations f r o m area high school principáis for the proposal. A request for an in-service training program for athletic directors was approved by the board. The program would involve both University and Eastern Michigan University athletic depártments to provide the training for directors in the school districts. All employés of the Intermedíate School District will now receive prescription coverage as part of their Blue Cross coverage effective today after being approved by the board last night. The preliminary budgets were also presented but discussion and adoption is scheduled for August.